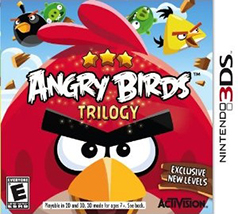 Angry Birds Trilogy is a 3 in 1 video game package that was developed by Exient Entertainment for the Nintendo 3DS. The game package includes three games; Angry Birds, Angry Birds Seasons, and Angry Birds Rio. Players will be occupied with over 100 hours of gameplay, amazing new graphics, and new hilarious animated cinematics.