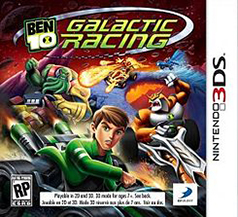 Ben 10 Galactic Racing is a racing video game that is in the Ben 10 series. The game was developed for the Nintendo 3DS by Monkey Bar Games, and is available in North America and Europe. Characters in the game have the ability to take advantage of their special abilities to change the outcome of a race.

Example: Ben can change into one of his alien forms during a race to increase his chances of winning.

The game includes 15 playable characters to race as, over 30 different karts to use, and 25 grand prix tracks in 5 different alien homeworlds. In addition, players can drift and perform mid-air stunts that have the ability to charge up character-specific attacks and defenses.