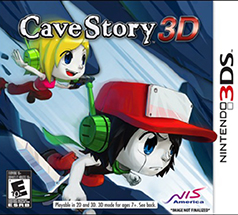 Cave Story 3D is a side scrolling action adventure game and the 3D remake of the original Cave Story PC game. The game is available for the Nintendo 3DS, and was developed by Nicalis. The game features updated graphics, remastered music, and 3D gameplay.

The game retains its main storyline and features while new additions were introduced. For example, the remastering of the 8-bit soundtracks into fully orchestrated music. Not to mention the 3D graphics. As you advances through the game, you will discover the origin of the Mimiga world and your own. The game can be considered as a combination of high-speed shooting action scenes with a heavy emphasis on platforming and exploring. There is also puzzle solving and a deep storyline.