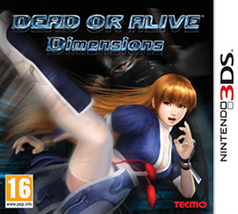 Dead or Alive Dimensions is a fighting game for the Nintendo 3DS and the 15th game in the Dead or Alive series. The game was developed by Team Ninja, and released by Tecmo Koei. The game has 26 playable characters and its only digital download is available via eShop in Japan. Physical copies of the game are sold in the 3 regions – North America, Europe, and Japan.

Players can play the Story Mode of the game, Arcade, Survival, Free Play, or just train in the Training mode to perfect the character’s moves. The game also includes a Showcase and a 3D Photo Album. When you’re finished with the story mode of the game, you can head into an online battle over Wi-Fi, or play against a friend with a copy of the game.

List of playable characters in Dead or Alive Dimensions :

Note : some characters from the list above requires unlocking.