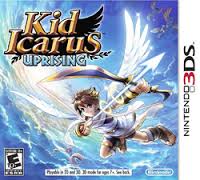 Kid Icarus: Uprising, also known as Shin Hikari Shinwa: Palutena no Kagami in Japan, is a third-person shooter video game for the Nintendo 3DS that was developed by Project Sora. The game is the third in the Kid Icarus series and the first since Kid Icarus: Of Myths and Monsters that was released back in 1991. The game also supports the Circle Pad Pro (CPP) for the Nintendo 3DS.

During the single player gameplay, players take control of Pit who has to protect the land from the evil Medusa. Pit has the ability to shoot enemies from a distance, attack them in close combat with melee attacks, and dodge enemy attacks. As the player goes deeper into the game, Pit will earn additional weaponry to take advantage of.

These weapon types are :

Note : each in-game weapon has its own advantages and disadvantages.