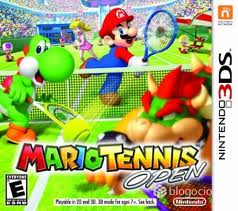 Mario Tennis Open is a sports video game for the Nintendo 3DS that was developed by Camelot and published by Nintendo. The game uses well known characters from the Mario franchise, and players take advantage of these characters to play against the CPU or a friend via local wireless or Wi-Fi.

Mario Tennis Open is the first Mario Tennis game to feature online multiplayer gameplay. Players have the options of playing standard tennis matches or special tennis matches with different rules and objectives. It is possible to play 2 Vs 2 matches. The game includes twenty-five playable characters, each with special qualities that the player can take advantage of. Players can also use the 3DS gyroscope by rotating the console to turn the in-game camera.

Note : in order to play with a colored Yoshi, you must first scan its QR code.