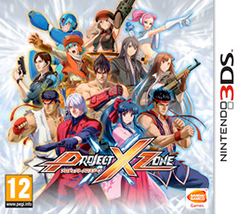 Project X Zone is a crossover tactical role-playing video game for the Nintendo 3DS that was developed by Banpresto and Monolith Soft. The game features characters from well known Namco Bandai, Capcom and Sega titles, and is the follow up to the Namco x Capcom 2005 video game.

The game will also feature Japanese voice acting with English sub titles. The battle system used in the game is called the Cross Active Battle System. This battling system allows the character to make combos when pressing (for example) the A button in combination with the Nintendo 3DS Circle Pad. In addition, gameplay elements include Support Attack, Cross Hit, and Critical Hits.

Project X Zone has 15 save game slots, over 200 characters (including both allies and enemies), and its North American and European versions will retain most of the content from the Japanese version of the game.