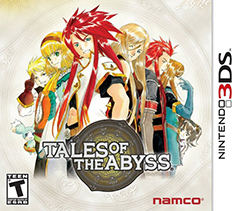 The game uses a real-time Flex Range Linear Motion Battle System (FR-LMBS). In addition, it features many skills and spells that you can take advantage of to defeat enemies. As for the game’s controls, it’s very similar to any Tales game. Characters have the ability to learn ‘Ad Skills’ which can be optionally equipped to help during battles. Capacity Cores also give characters a stat bonus every time the character levels up.

As you progress deeper into the game, you will discover new characters that will help you along in battle. These characters can be leveled up and edited (eg. skills, equipped items, etc) to your liking. The game gives the player the ability to experiment with attacks so that they can discover combos that quickly eliminates the enemy – or quickens the process.

Tales of the Abyss Trailer :

Similar 3DS Games To Tales of the Abyss

Tales of the Abyss Tips and Tutorials