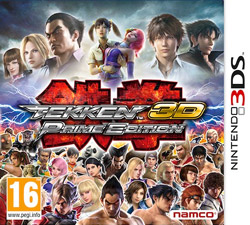 Tekken 3D: Prime Edition is a fighting game for the Nintendo 3DS gaming console that was developed by Namco Bandai and Arika. The game is in the Tekken franchise and is the 2nd official game to make its way to the Nintendo platform. There are 41 Tekken characters to choose from, different stages to battle in, and the Tekken: Blood Vengeance 3D movie comes pre-installed with every copy of the game.

The Tekken: Blood Vengeance 3D movie is not just some cinematic 5 minute trailer. No! It’s over an hour long if I remember correctly and it takes advantage of the handheld console’s 3D screen. While the single player contents of the game and its Blood Vengeance movie can be viewed in 3D on the Nintendo 3DS, its multi-player gameplay does not take advantage of the system’s 3D capabilities.

What can you do in Tekken 3D: Prime Edition? :