When Sonic the Hedgehog 2 came out in 1992, it bettered its predecessor in every way. Faster, better-looking and with two-player compatibility, Sega’s mascot could hardly have had a better follow-up. Twenty-three years later it still remains one of the most accessible games in the Genesis’ library. It’s been ported to almost every console from the sixth console generation onwards. Now, as the final Sega 3D Classics project, it’s available on the 3DS as well.

It’s highly unlikely that you’ve never played one of the first three Sonic games at some point; the eponymous blue hedgehog runs through several levels which have branching paths that intertwine again just as easily, collecting rings all the while. If you collect 100 rings, you get an extra life. If you get hit by an enemy, you lose all your rings. As long as you have at least one ring, you won’t die unless you fall off the stage, but if you have no rings left and take a hit, you’ll lose a life. One of the new features in the 3D version of Sonic 2 is the ‘Ring Keeper’ mode, which makes the game much easier. You start the game with ten rings, and if you get hit, you’ll lose only half your rings. If you found the original version of Sonic 2 difficult (and who didn’t?), thank your lucky stars for Ring Keeper mode. There’s also a Stage Select mode which lets you start the game on any stage.

Large portions of levels are dedicated not as much to conscious platforming as holding Right and watching Sonic show off his speed while the levels show off their excellent design. It’s probably the loosest platforming game of its era, with speed taking precedence over everything else, but it’s also one of the most fun. 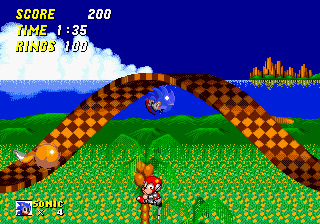 The lack of precision doesn’t mean you can get away with just holding right, though. Lots of the aforementioned fun sections end with a trap or an enemy in your way, waiting to ruin your momentum if you don’t think fast. Almost all the best paths (the ones that have useful items) require you to move in the right direction at the right time to get to them – which is harder than it sounds when everything is happening so fast.

Sonic 2 introduced the spin-dash, which allows Sonic to accelerate quickly from a standing start. It’s quite useful for those parts where you lose your momentum and need to get going again. The game also introduces Miles ‘Tails’ Prower, a two-tailed fox and Sonic’s buddy for life, who follows you throughout the game, collecting any rings he comes across. There’s an option to play as just Sonic or Tails, but you can’t use Tails’ flying ability; that happened in Sonic 3.

Unfortunately, the boss battles that aren’t much fun on other versions of Sonic 2 aren’t any more frustration-free here either. This is particularly true for the Casino Night zone boss fight, where you have to keep pressing Down while falling to make sure Sonic rolls up and it counts as a hit against the boss instead of a hit against Sonic. The game doesn’t always register you pressing down when you’re descending so fast, so you’ll take the hit even if you did it right. And it’s very easy to lose all your rings and not get hold of a single one in that fight. Ring Keeper mode makes it simpler to get through if you don’t mind feeling a little defeated. 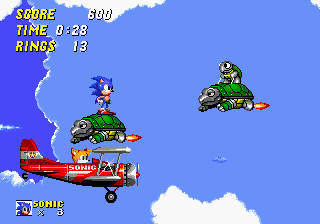 Sonic 2 also had 3D special stages, something of a revolution back then. They’re activated by passing a checkpoint with fifty rings or more, then jumping into the portal that appears above it. It was also one of the earlier games to make you go the extra mile to get the good ending, because you need to beat the special stages and collect all seven Chaos Emeralds to get the real ending.
The soundtrack is instantly familiar with the Green Hill theme in particular being recognizable and nostalgia-inducing for anyone who’s played a Sonic game. The 3D implementation is good: you can select between Fall-in and Pop-out 3D, with the latter being better for the ‘wow’ factor. Like other 3D Classics releases, there’s a mode that changes the screen to make it look like you’re playing the game an old TV. There’s local multiplayer as well, if you have a friend who owns this game as well.

3D Sonic the Hedgehog 2 is, for the most part, the same game it always was. If you played this game before but didn’t find it special, you won’t miss out by passing this on. If you’re a big fan, you probably already have it. For Sonic newcomers (a rare breed indeed) there’s no question about it – you should give this version a spin.