RUNNING TO A 3D ERA. 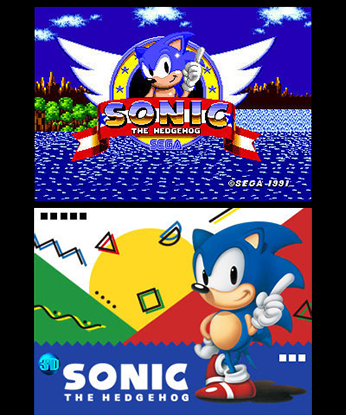 Sonic The Hedgehog is a platform game and the irony is that Sonic is quite slow in this entry. Like most platform games, you will need to move from point A to point B while avoiding obstacles, defeating enemies and winning points, therefore the core idea is simple.

The level design of the game is pleasant and it can be rewarding sometimes, however, it can be frustrating at latter times of the game. There are a total of six worlds and world has three zones (the last one has the boss).

There is a good quantity of enemies (being varied) and some of the common elements you will discover are the spikes (they damage you) and the springs (make you jump to a direction). The overall design was original for when it was first released, where a few elements are still unique in the gaming world (such as the coins or the flag pole from Super Mario Bros. for example). Now its design can be quite overused (aiming my finger to Green Hill Zone).

There are some items in this game and the most common one is the ring: collecting rings will allow you to win points, similar to the coins in the Mario games. Taking a hit from an enemy will result in the loss of coins. Collecting 100 coins will give you an extra life, and having at least 50 rings at the end of zone 1 or 2 will give you access to the special levels. 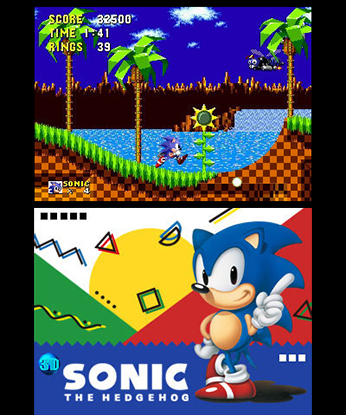 The special levels use different gameplay mechanics where you need to play around a rotating maze with the mission to pick one of the six Chaos Emeralds (one per world). They can be frustrating, therefore the save state will be useful here.

The rings aren’t the only items you will find in this game, where most of them can be found in small TV boxes. They are:

The controls are simple. You can move using the Control Pad or the Circle Pad and jump with the A button. In the case you enabled spin-dash, you will need to press down when you’re not moving and press the A button.

There’s no change at all in the graphics department besides the addition of the 3D effect. The 3D effect is exceptional but it feels dull most of the time, and that applies to the two different 3D modes. The game also has a TV filter that looks great when the 3D effect is activated, however, it can be confusing for new players who have never played on a CTR TV for example.

About the sound, it’s the same as the original game, however, there is the option to emulate two different sound chips which is a nice touch. Sonic The Hedgehog has its own classic themes, where some songs are classic in the videogame world but they are still quite short. It’s pretty varied, but also repetitive. 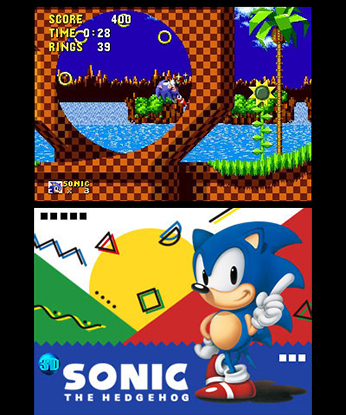 The presentation is greatly done, where the menu’s interface is based on the game, the Spin Dash is included as an additional option, the Japanese and the International modes are included, you can change the controls, the sound’s chip emulation, the save state feature is included and there are some other display options.

Considering previous versions of the game, a 16:9 version would have been a great addition, and other ones like having the ability to play with Tails or Knuckles (considering the mobile remastered version). Still, the work here is lovely.

3D Sonic The Hedgehog is a classic and the port is remarkable overall, where Sonic fans can consider it as a ‘must have’ game. The 3D effect doesn’t bring a better experience and if you have a PC or a mobile, you can get a better version for less money.