The Nintendo 3DS XL feels comfortable in the hand and it has a nice design, however, its joystick is a little too high while its D-pad is a little too low. It’s not a major issue, however, it can feel weird and be difficult when using for the first time. Eventually the user will get accustom to it which makes it not a large concern. 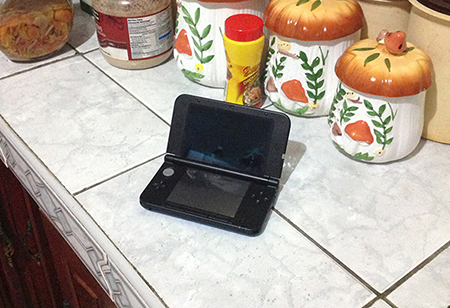 The gaming system is very light in weight. According to Nintendo, the 3DS XL weighs approximately 8 ounces when including the device’s battery pack, SD card, and stylus. That’s not too bad. The company also learned a lesson with the regular Nintendo DS and made its successor’s top body more attached to its bottom, therefore, both parts will be more difficult to break when compared to its previous generation systems. 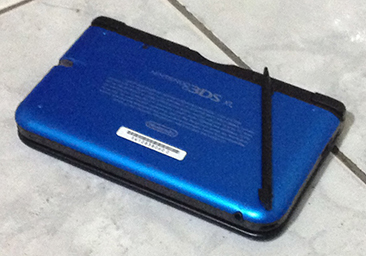 The stylus fits back inside the console without a problem. The back feels smooth and looks premium, however, every now and then you might think that it’s a cheap knockoff due to its weight – yeah, it’s that light. If I recall correctly, the first Nintendo DS was a little on the heavy side, while the DS Lite was a bit lighter in weight. Imagine both being combined (DS closed back design + DS Lite’s weight) – that’s how I think it is with the 3DS XL.

The 3DS XL sports a 4.88-inch widescreen LCD display with 800 x 240 resolution (upper screen), and is capable of displaying approximately 16.77 million colors. With the 3DS XL, it is possible to view 3D content without the use of a glasses due to the 3D screen. It’s something you have to experience for yourself. In addition to that, 3DS game graphics are a major improvement to regular Nintendo DS games.

I know what you might be thinking. How’s the graphics with a larger screen that has the same resolution as the regular 3DS? The answer is simple. Quality has not been reduced, even with the larger display. Instead, the 3D effects are better on the XL’s larger screen when compared to the original 3DS.

The 3DS XL comes with a 4GB SD card. That’s double the SD card storage that is included with a 3DS purchase. Nintendo pre-installed several applications on the device to let the user know right out of the box that the system is capable of running applications and not only games. The software includes an Internet web browser, friend list, game notes, and notifications. The pre-installed apps that come with the North America region 3DS XL are;

The eShop can be used to download more software from Nintendo. 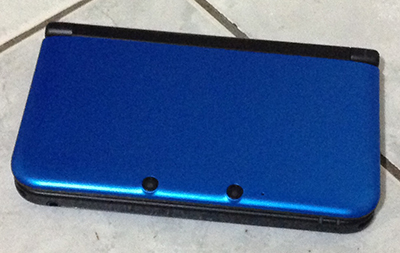 It is possible to change the screen’s brightness, enable a power saving mode feature, and rearrange the app/game icons that are located on the home page of the system. Both the 3DS and 3DS XL gaming devices are backward compatible, meaning you can play 3DS and DS games on the same console. In addition to that, selected classics (eg. GBA, NES games) are available at the Nintendo eShop to download, however, the 3DS/3DS XL takes advantage of a virtual console officially distributed by Nintendo itself to play said games.

The 3DS XL has two rear facing cameras on its back and one front-facing webcam that stares the gamer right in the eye when gaming or using the device. The two cameras on its back are for capturing 3D photos and videos that can only be viewed on a Nintendo 3DS device. Each camera on the 3DS XL has 640 x 480 resolution and a single focus lens that uses the CMOS capture element. 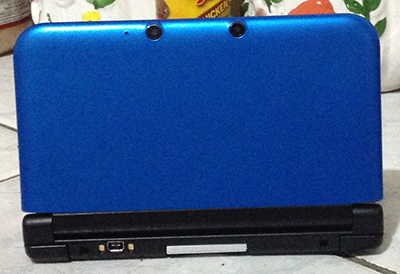 ( Back view of the Nintendo 3DS XL, showing its two cameras )

The quality of photos are not great, and videos are the same. Taking photos or trying to record videos in low-light is terrible. On the other hand, photos and videos are actually decent in a well lit room (take note, I did not say great). The best part about the gaming device’s cameras is the ability to shoot pictures and videos in 3D – that’s pretty cool. Other than that, you can’t expect to have the world’s best camera in a $200 gaming device.

The battery that comes with the 3DS XL is a lithium ion battery. Its charge time is 3.5 hours according to Nintendo, and it has the ability to last up to 3-5 hours when playing Nintendo 3DS games if fully charged, or 5-8 hours for Nintendo DS games. It can last longer or shorter depending on the system’s load, however, a portable gaming device should last a day with a single charge in my opinion (or about 12 hours).

The Nintendo 3DS XL has a $200 price tag in the United States. The gaming handheld will most likely have a similar price in other countries. It’s very affordable, and only $30 higher than the regular Nintendo 3DS.

For only $200, the Nintendo 3DS XL is worth getting. It’s not something that you might want to upgrade to if you already own a regular 3DS if it’s in good, working condition. The larger display might benefit gamers that are not satisfied with the regular 3DS system’s regular screen. To sum things up, I enjoy using my Nintendo 3DS XL and I do not regret the purchase. Money well spent in my opinion.