The new Pokemon professor is named Augustine Sycamore. Just like with most Pokemon games, Professor Augustine Sycamore hands you and your friends a pokedex and helps you along your journey to become a Pokemon Master. 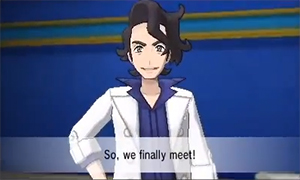 You can’t play a Pokemon game like Pokemon X or Pokemon Y without running into an enemy at some point of the game. Pokemon X and Pokemon Y introduces Team Flare. They’re going to appear in various cites of the Kalos region, so be prepared. 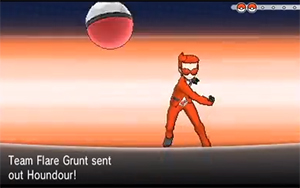 ( Photo of a grunt from Team Flare )

More new Pokemon were revealed during the trailer. The first Pokemon is Inkay (the one that looks like a squid on land), a Dark and Psychic-type Pokemon that appears in both Pokemon X and Pokemon Y games. Next up is Pangoro, a mean-looking Pokemon that resembles a bear, and is the evolved form of Pancham. The twig in his mouth should have given it away. Next in line is Malamar, a Dark and Psychic-type Pokemon, and the evolved form of Inkay.

Lastly, Swirlix battles with Skrelp and Spritzee battles with Clauncher. Both Skrelp and Clauncher were revealed last month, therefore, only Swirlix and Spritzee are to be considered as new reveals. Swirlix is a fairy-type Pokemon that looks like a combination of Jigglypuff and Yu-Gi-Oh’s Kuriboh. As for Spritzee, it’s the pink-colored Pokemon that resembles a bird, however, it is a fairy-type Pokemon and can only be caught in Pokemon Y.

You can view photos of the game’s new Pokemon from the trailer below :

Pokemon X and Pokemon Y will be available worldwide on October 12th, 2013. The game will also be available as a digital download via Nintendo’s 3DS eShop on the same date for around the $40 US price range.