EnjoyUp is here again with another Wii U eShop remake of another title from the 99 series released on the DSi Ware around two years ago, this time is the turn of 99Moves.

Just like the title, you are limited to 99 moves: once you have used them all you won’t be able to move, and will likely lose unless you have the goal ahead. Of course, this means most of the players will prefer the safer way, but those who want to be risky will be highly rewarded: you get a lot of points.

This will be hard though, since the level design is made to be difficult featuring tight spots, moving platforms, speed sections and whatever is needed to block your way, making you waste your precious moves. Being hit will enter you into the negative zone, and you will be invincible for a couple of seconds, be hit again later and you will die. 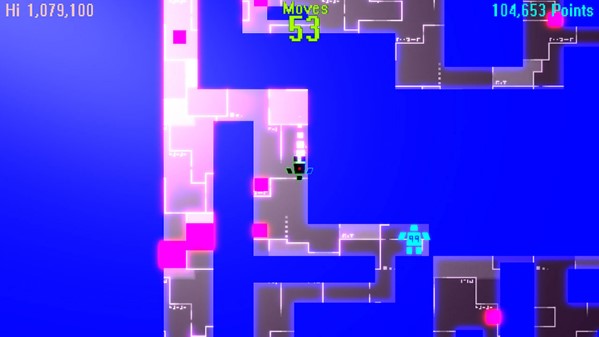 The little 99 guy item is still present, and is your only way to recover from the negative zone (also for getting 99k extra points). Your goal is the little dark hole that gave you extra time on 99Seconds, where it can appear on a few different ways.

The are four different modes: 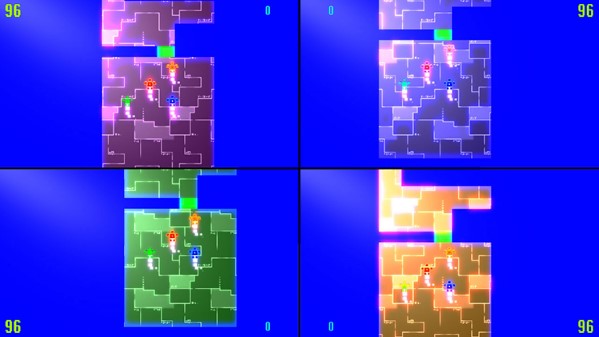 The graphics are practically the same as 99Seconds: a simple and minimalist design that looks a lot better than its original release offering a smooth 60 frames per second. The same happens with the presentation, being similar to their previous Wii U release featuring a nice interface, a simple manual, online leadboards, local multiplayer, off-TV mode, a plenty of controllers supported, and of course, replay value.

The soundtrack is nice featuring a few melodies and some voice acting, and since it feels more varied, it will be harder to get tired of it. Since I didn’t player the original DSi title, I can’t compare the audio quality this time.

Conclusion:
Another nice entry for the Wii U eShop, offering an interesting arcade-puzzle experience with local multiplayer and online leadboards. Considering both titles prices, it’s a good option for your collection offering a better experience than the outdated original releases.

The question now is if 99Bullets will be also released on the Wii U eShop soon.