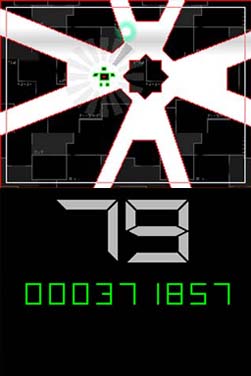 GAMEPLAY:
The best way to describe 99seconds is as an arcade game with an objective of trying to survive by avoiding a lot of obstacles while having a time limit of at least 99 seconds.

Within the 99 seconds you have from the beginning of the game, you are capable of slowing down the time or even reversing it by pressing a button (it can be A, B, X, Y, L or R), allowing you to evade with a lower difficulty but with the price of winning less points. In addition, you won’t die if you are hit, instead you will only lose a few seconds (and the score you would be able to win meanwhile).

If you’re out of time, you will be unable to slow down the time and also, die if you are hit again. Still, there are two items you can find: a little guy worth 99K points and a little capsule that will give you 9 extra seconds. 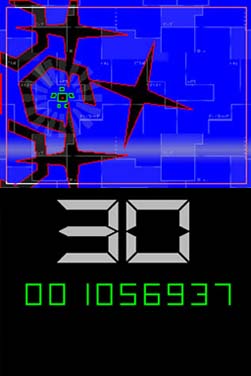 GRAPHICS, SOUND AND PRESENTATION:
The graphics of 99Seconds are simple considering it as a DSi Ware title where it consists of a simple and quite bland design that fits with the game. For some reason there is some lag when the screen is really charged with content.

The soundtrack presents two songs (for the main game and the difficulty screen) and a few voice clips which are fine, however, considering the game’s nature you will most likely decide to turn the volume off after time.

The presentation of 99Seconds is simple, the menu just gives you two options: view the manual or start playing, where you go to the selection screen. Here you need to choose your difficulty meanwhile you’re able to see your high score, it’s that simple actually.

CONCLUSION:
For its small price tag, it’s a nice arcade entry for DSi Ware and the 3DS. Its simplicity gives you a nice experience but sadly it won’t last too long because there isn’t a lot to do, nor a reason to keep playing (just a local leadboard).