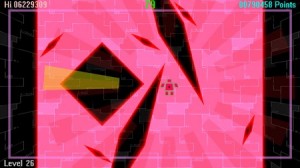 GAMEPLAY:
99seconds is an arcade game that retains the same gameplay from the DSi version but with some new features: you need to survive by avoiding obstacles while trying to get the best score possible with at least 99 seconds to do it.

The first main change you will discover is that 99seconds is no longer a single player game where you can share the experience with another four friends (everyone will share the score and the use of slow times). Now you can also directly restart if you made a lot of errors, without being required to visit the title menu in order to play again.

The objective is still the same: you start with 99 seconds and you have to avoid different types of obstacles. Meanwhile you still have seconds left, you are able to slow down and stop the time, making it easier to avoid and also keep you alive even if you’re hit. When you’re out of seconds, you won’t be able to use your special ability nor keep playing if you are hit again.

You can find two items meanwhile: first there is a little guy that will add 99k points to your score and a little capsule that will add 9 seconds to the timer. There is a little difference from the DSi version: both being hit and slowing down the time will make you stop winning points, and being hit means you will lose points once the game is finished (a penalty). 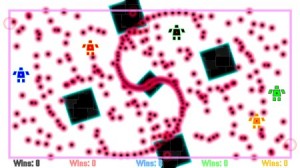 The final score is not only yours now and the Wii U version also features an online leadboard which adds more replay value to the game. Each difficulty features three small lists: the top 8 worldwide, the top 8 between you and your friends and the last compares the scores on your position.

A second mode has also been added, named Survival. The mode is multiplayer only, which means up to four player will compete to survive the longest they can and the latest to die wins. It’s a really simple mode but a nice touch.

GRAPHICS AND SOUND:
Graphically, 99seconds aims to provide the user with a simple and minimalist design. This time there is more work when comparing it to the DSi Ware title, resulting in a better presentation. It’s also smoother, offering a full 60 frames per second experience without lag.

The soundtrack is almost the same where there’s an extra song for the Survival mode. Still, this time it’s a high quality work, not just a midi file. The new instruments sound great considering the original release but that doesn’t mean you will get tired of it with the time. 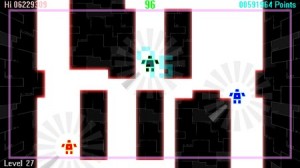 PRESENTATION:
The presentation of 99Seconds is better but still simple. There is a pleasant interface, online leadboards, multiplayer gameplay, a new mode, the TV-Off is included and it feels more like a little remake rather than a port.

For the other side, the manual is simpler than the DSi version where it only lets you know about your objective and the credits, no words about the story, controls nor the new mode.

CONCLUSION:
Featuring local multiplayer and online leadboards, 99seconds is a good addition to your library, and this time there is a reason to come back even if it’s just to break an online record during a short burst. It’s cheap therefore it won’t damage your wallet, nor will it disappoint you.