The game tries to mash up the exploration-focused approach and design of your typical The legend of Zelda game with the style and gameplay of a traditional 3D Platformer. It also represents the first attempt of Sky9 Games at releasing a console game. But how does it fare?

An ancient evil awakens. Vicious monsters suddenly roam around the world. A mysterious crystal appears in the sky. What if the responsible for all of this is that goofball of our protagonist? The only thing Rusty can do is try and fix the situation. 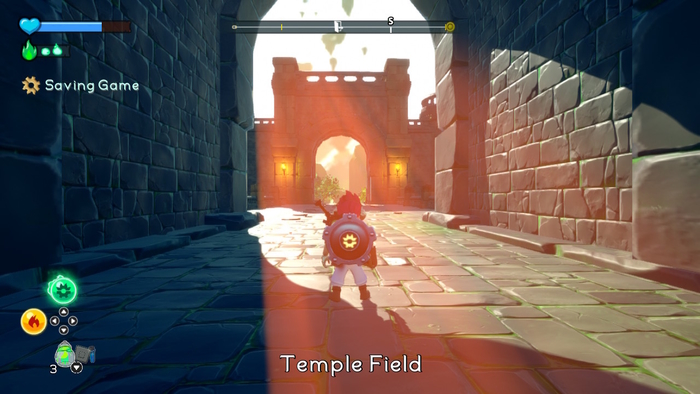 Let’s get it down already: the plot is simple and unpretentious, full of humor and extravagant situations. Characters have the depth of cardboard, but they embody well their tropes. There’s Valy, Rusty’s nerdy friend who has a clever comeback for anything and who will babysit our hero for the entire journey. The Mayor is the typical greedy and single-minded mayor that every town across every medium seems to have. Slimegon lives inside a well and is mind-controlled by little slimes. These are only a handful of characters Rusty will meet during his journey. All of them contribute to give some color to an otherwise bland and trite story.

The game follows a third-person perspective with a freely rotatable camera. Controls are pretty simple: B to jump, Y to attack, L to roll and A to interact.

There is great variety of items that Rusty can find. They are stashed into vases and boxes or dropped by enemies. The rarest can be found in treasure chests. Luckily, the player doesn’t have to open the menu to use the consumables. Pressing the Down Directional button makes it possible to circle through the items. Finally, pressing X will cause their immediate use.

The gameplay is based on the Spirit Weapons and their powers. There’s the Spirit Sword, balanced and good for defending. The Fire Knuckles are a fast-paced weapon that controls fire. Finally, there’s the powerful but slow Ice Hammer. Every weapon is associated with a particular spell, which is triggered by ZR. Rusty will either shoot a whirlwind, a fireball or an iceball. Casting a spell depletes Spirit Power, which recharges over time and is increased permanently when Rusty gains new magic. Later in the game, new powers will become available, this time activated by ZL, and is mainly useful for exploration, like for traversing water or lava. Direct interaction with the world is minimal: Rusty can only destroy vases and crates, while he can only use his powers against specific items such as turbines for the whirlwind or bramble for the fireball.

Too bad the game is plagued with bugs. Rusty will often get stuck in the scenery and die. A lot of jumps will miss without reason. Some traps, this time to the delight of the player, won’t trigger.

The kingdom of Regalia is a vast overworld, through which Rusty can reach any location. Progression is linear and is strongly based on the new powers the player obtains. Navigation is simple thanks to a compass that shows the next Main Quest’s direction. The more powers Rusty has, the faster traveling becomes and at around halfway through the game the player obtains the ability to fast travel. Too bad that each location has to be revisited to use it. 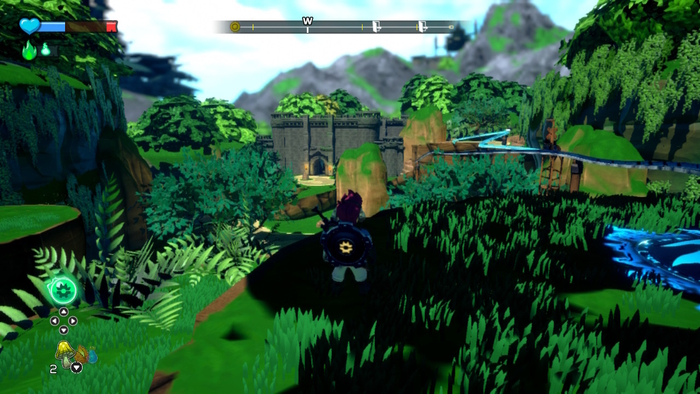 The dungeons are the main core of the game but don’t expect them to be puzzle-heavy. This game has a lot of platforming elements and dungeons are designed accordingly. The player will move boxes, activate buttons and levers, but mainly will jump and fight enemies. While puzzles are pretty simple, platforming sections have an increasing degree of difficulty. This can create some problems due to how the process of saving is designed. In fact, there isn’t a save but only an auto-save system. It triggers mainly when going from a game area to another or when the player does something important. If Rusty dies, it’s ‘game over’ and the last save is loaded, canceling any progress after it. This can lead to some frustrating moments, considered that the dungeon’s condition – puzzles solved and enemies slain – reset if the player exits the dungeon to gather resources.

Combat follows simple premises: a simple attack, jump, wide attack and a slow charged attack (so slow that it’s almost useless in battle). Holding L activates lock-on. It’s possible to change targets with the Right Stick, and by pressing A, Rusty will parry almost any attack. If the player times the parrying well, the protagonist will be invincible for a few seconds and will reflect any ranged attack sent to him.

It’s possible to encounter invincible enemies: a shield protects them. They come in many colors. The green, red and blue ones can be destroyed by the corresponding element. The rainbow toned is the weakest, since any magic will affect it. The white ones are immune to Spirit Power, but well-timed parrying dispels them.

While combat is simple at the core, boss battles are extremely dynamic and fun. Brute force isn’t advised and rolling away or parrying at the right moment really makes the difference. Too bad that there isn’t a great variety of enemies. Rusty will almost always fight against skeletons, which come in only four forms: sword and mace wielding, archers and mages. Even the first three bosses are skeletons. 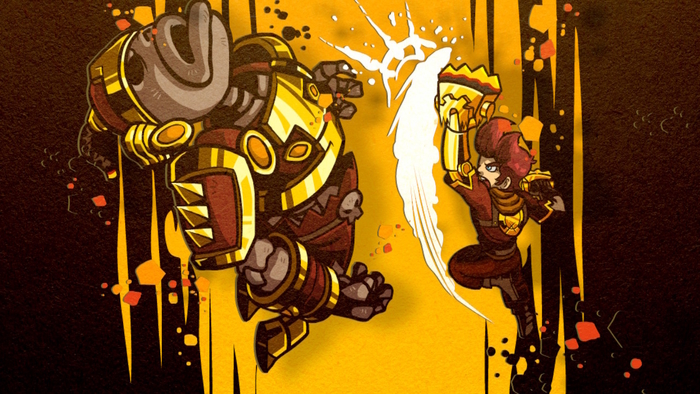 The player can perceive a considerate frame-drop verifies when there are too many enemies on screen. This is pretty problematic when other effects are playing, like the falling snow in the ice region.

A Knight’s Quest is a really pleasant game to the eyes. The graphics are bright and colorful. The characters’ design follows a cartoony style that complements well with their over the top personality.

Each game area and its biome are rendered in a unique and distinctive way, with a lot of care and richness in particular. Shadows are heavy and marked, to compensate for the bright colors, enhancing the game’s visuals. Due to this, unfortunately, some areas are a bit difficult to navigate, but that’s mainly relegated to optional and hidden zones. 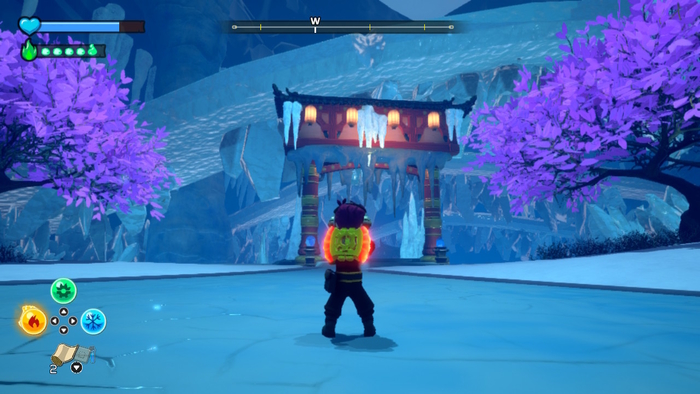 The soundtrack won’t amaze anyone, but it is functional to situations the player finds themselves in, from the cheerful tune heard in town to the epic choir during boss battles. Music isn’t from bugs: the tracks suddenly stop playing without any specific reason. Luckily, this isn’t a really common occurrence.

This game is packed with content. Outside of the main quest, the player can always return for more. Many NPCs will give Rusty secondary quests to complete. They mainly consist of traditional fetch quests or timed runs. It’s possible to upgrade the Spirit’s weapons at the blacksmith in town.

As the game progresses, players can revisit previous zones for hidden locations packed with helpful items. During exploration, Rusty can find floating gears that activate timed challenges. It’s possible to mine ores from rocks and crystals, provided one has purchased a pickaxe. The most extensive quest available is the search for slimes. During exploration, a slime icon will flash on the upper part of the screen. Following the humming tune that the slime emits will bring to its location. Then the player can bring the tiny creature to Slimegon and receive an inventory upgrade. This is really important since otherwise the bag is cramped and fills too fast.

While the game can be completed in around 15 hours, it’s possible to considerably lengthen the playtime by doing additional activities. It’s advised to do so in order to ease the overall experience. Without upgrades of any kind, the game could become too frustrating.

A Knight’s Quest is a fun and well-designed experience that suffers greatly from its buggy execution. It presents itself as a Zelda-clone, but it’s a platformer at its core.

While there isn’t anything innovative in this game, it can entertain for a long time, especially if tackled with patience and will to explore.