When we think of adventures in space, most of us would probably think of a guy in a spacesuit with a blaster, surrounded by aliens and meteors crashing down on the surface all around you. Or maybe some of you picture a game such as Star Fox, where you’re the pilot of a ship and your mission is to bring down the other ships, and then in some missions you’re on the ground instead, fighting the aliens on foot. Knowing only the title of Affordable Space Adventures, is this what you believed? When I first heard the title of this game, I thought it would be one of those games where you have to upgrade your ship and earn money by doing missions and all that fun generic space game junk. I’m happy to admit that I was very wrong. 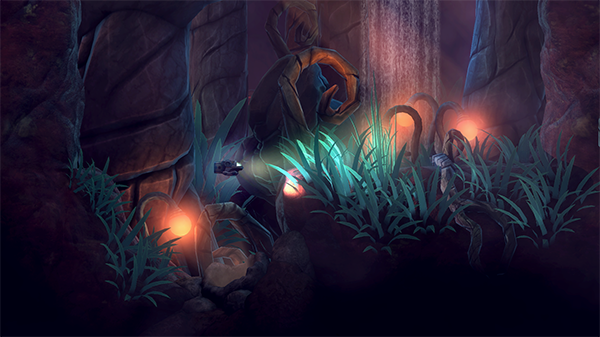 Starting the game, you’re watching an infomercial. If I didn’t know it was a game, I would probably believe that it was an infomercial, because it’s…a very convincing infomercial. It’s an infomercial for a company known as ‘uExplore’. They’re a spaceship rental service, and supposedly they have a 100% injury-free rate. They start going in to how their spaceships are cheap and ready to explore. It sounds fantastic! They have me convinced! ..I’m just wondering why they have to keep repeating the fact that no one has ever been injured. He’s said it so much now to the point where I almost don’t believe it anymore.

After the infomercial cuts out, you see your spaceship. Yes, your spaceship and all of its sputtering glory. You quickly learn that the infomercial may have made things sound a lot more promising then they really are. At least your ship came equipped with a flashlight, though! Now you can see through the foggy abyss that is the planet you are exploring. Yeah..this planet sure looks safe. Wreckage in flames everywhere, along with a fog that I can hardly see through, even with a flashlight. Are you sure this is the planet from the commercial..? 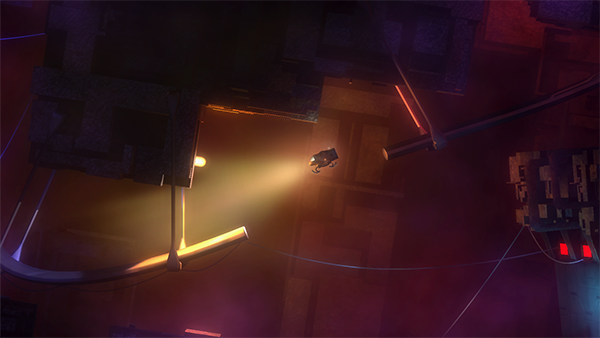 The control setup for this game is fantastic. It utilizes both the TV and the Gamepad very well (it is, after all, a Wii U exclusive, so why not take advantage of both?). You must use the TV to view the world you’re exploring, while using the Gamepad to control your ship’s movement, along with the parts of the ship. The Gamepad is where you’ll be looking most of the time, but once you learn where the controls are, you’ll be able to move throughout the levels while controlling your engines and stuff (believe me, it’s necessary).

Now, more about the controls. There are two basic engine setups (although only one from the start): the fuel engine, and the electric engine. The fuel engine is (obviously) a lot louder, and uses more heat, as well as generating a lot of sound. The electric engine, however, is very quiet and uses little heat, but a lot of electricity. You must jump back and forth between each one and choose your setup wisely to get past certain aliens. Yes, you heard me correctly. The spaceship, although equipped with many helpful things, does not have a weapon of any sort. You have a scanner and a flare gun, but neither does any damage. You must use your creative mind to get past the aliens. 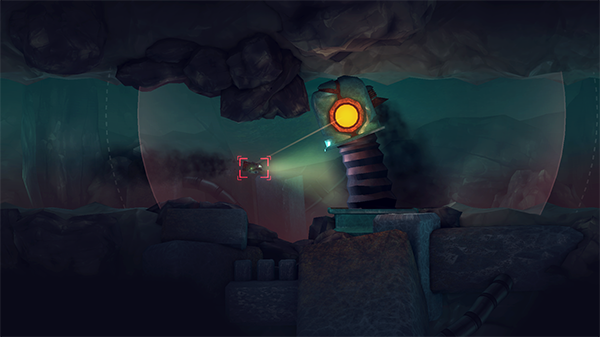 By using your scanner, you can scan each alien and see what will tick that alien off. Sometimes, it’s a high amount of sound, while other times it could be a high amount of heat and electricity combined. You unlock different systems and mechanics as you go, such as a landing gear or anti-gravity. Just don’t let the popup notice give you a heart attack. Because the sound doesn’t really come through the Gamepad, I had turned my Gamepad volume all the way up and had forgotten to turn it back down. Then, randomly, I hear a loud popup sound and I nearly jumped out of my skin. I looked down on my Gamepad and it told me that I had unlocked a new spaceship feature. I found this progression/unlock system very cool and unique, but I found the alert sound to be very blood pressure rising, especially if you were trying to be stealthy and you didn’t expect it to happen.

The graphics in the game are just outright gorgeous. It’s not so much the graphics as it is the style and the deliverance. You were promised this lush, beautiful alien planet where instead you got this desolate, bleak, alien-ridden world (I mean, it still looks pretty..but the world the infomercial promised is still a lot more appealing). Also, the way the levels work almost leave you with a cliffhanger. Usually, each level’s exit is on the other side of an alien that takes a lot of creativity to get past. Every time I breached another alien, I threw my arms up in excitement. Each level offers a unique set of aliens and new challenges to conquer. In the later levels, you will experience slides in which you must use the appropriate landing gear and timing to breach the aliens and reach the switch you’re aiming for. 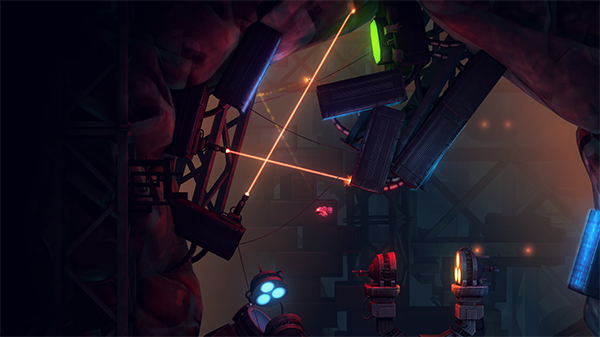 Although not much music in this game, the suspense level made up for it. The sound of your engine and the sounds of the aliens are enough to get you by. Even if there was music, I didn’t hear it because I was too busy plotting my next escape plan. Each level is very different, whether it be unlocking new stuff or a more difficult alien, the game stays challenging yet fun throughout. Sadly, however, I wasn’t able to try out the co-op (because I’m a loner). I do know that it has up to 3 player co-op, and that it is truly a separate experience. One person is the pilot, one the navigator, and one controls the spaceship equipment. If you find two other people that know how to play video games, this would be a great game to play with friends.

I’m giving Affordable Space Adventures a 9/10. There are plenty of levels to offer you hours of challenging yet fun gameplay, along with the co-op experience that promises a lot of fun with friends. On the surface, this is a quiet game of exploration. But once you dive in, you’ll soon realize ASA has a whole lot more to offer.