Kotaro Uchikoshi is back at it again with another out of this world, bizarre adventure game. Fans of Uchikoshi’s previous work, mainly the Zero Escape series, are questioning if AI: The Somnium Files will reach the heights of the earlier titles in the Zero Escape series. Does Uchikoshi have what it takes to achieve that goal, or is it merely just an unobtainable dream?

To prevent spoilers, only the start of the story will be talked about in this review.  Please do not be alarmed, later parts of the story follow in the crazy footsteps of Uchikoshi’s past games.

Bloom Park is the latest crime scene of the New Cyclops Killer. Kaname Date is called in to investigate the crime scene. Although not his normal job, Date agrees to investigate because he knows the victim. The victim was brutally murdered and tied to a horse carousel. The victim was also missing her left eye. Six years ago there was a string of murders with similar actions, because of that everyone thinks there is a new serial killer on the loose. Thanks to Date’s AI eyeball partner, Aiba, a twelve-year-old girl was discovered hiding away in the carousel with a bloody icepick. To Date’s surprise, it’s his roommate, Mizuki. Date has no choice, but to clear Mizuki’s name. Follow Date and Aiba as they encounter several characters to the likes of a crazed otaku fan, an elementary school teacher, the leader of the Yakuza and the internet idol, A-set. 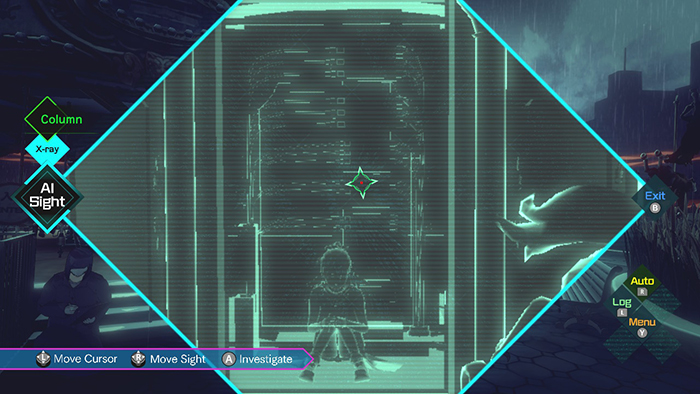 Date is a member of the ABIS (Advanced Brain Investigation Squad) law force. This is a specialized group that can enter the minds of others. Through the use of the psync machine, Date can jump into a suspect/witness’s subconscious dream. This subconscious dream is called an somnium. Somniums are vastly eccentric nightmares that hold secrets and clues that suspects/witnesses are unwilling to give up. Everything seen in an somnium is not an exact replication of an event. Date and the ABIS crew must figure out which parts of an somnium are real. Date does not physically go into someone’s somnium. Instead, players control a human-like version of Aiba. A few somniums have secondary solutions, the way you solve an somnium determines which route you will take.

Investigations and somnium mind dives are the two main forms of gameplay. In investigations, you search for clues and interview witnesses/suspects. This plays out as your basic point and click adventure game. Investigations are played in the first-person view. Simply use the left joystick to search for items in the background and then press A when you found one you want to search. Items that are lid up green have information and sometimes you have to search the same items several times to get the full data. Selecting a person gives you an option of topics to talk about with them. Select which option you want on the D-pad. Sometimes there may have a humor option, so be sure to select that as soon as possible if you want to experience it. Otherwise, the game may move you from that scene and continue to follow the story.

Aiba can use x-ray, zoom, and thermo vision. This adds another layer while searching the crime scenes as it lets you see things invisible to the naked eye. During a few cutscenes, players might have to perform a quick-time event to process the story. Lastly, once you bring someone in for official questioning, you have to present clues to them in hopes that they provide the information you are seeking.

Once in someone’s somnium, it’s your mission to break their various mental locks. Each mental lock has a specific instruction in which you must perform. When you break a mental lock it becomes a checkpoint. You can use this checkpoint to warp back to if you fail a somnium. It comes at a cost though, you have to use the retry currency and each checkpoint has a different currency value. Sometimes it’s better to go back to an earlier checkpoint as you will have more time to finish the somnium. If you run out of retry currencies, you will have to start the whole somnium over again. You can hold down ZR to skip aminations and the game will give a checkmark to objects you interacted with before. The first few somniums may feel overwhelming but as the game processes, they become more straight forward in what you have to do. 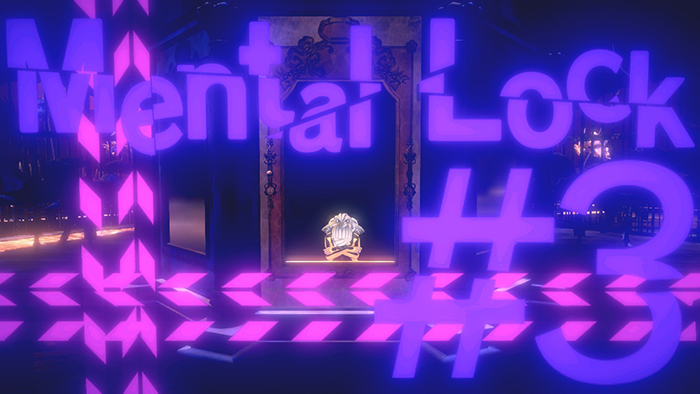 You only have six minutes to complete an somnium. Somniums do not use real-world time.  Every action you make takes up a certain amount of time used. Walking around also takes away time from your time meter. There is no way to gain back lost time, but you can decrease time by using TIMIES. TIMIES are items that can be found by doing certain actions. Select a TIMIE with L or R, then press A to lock-in that TIMIE and finally select which action you want to execute on the D-pad. You can only hold three TIMIES at once, but you can use TIMIES as often as you want as long as you have them. TIMIES can also have negative effects that add time to your action and they will automatically be used.

The game uses a flowchart system, which allows players to jump around to different routes. It saves a lot of time as players will never have to replay entire non-somnium sections again. Unlocking routes give the player the information they need to gain access to the game’s true ending.  No matter which route you take, you are always making the process to the true ending. Players will have to replay certain somnium parts and perform the alternate solution to unlock another route. Sometimes players might be on a route they cannot complete in full, due to a lack of information.  Once you gain the right information, those routes will open up again. 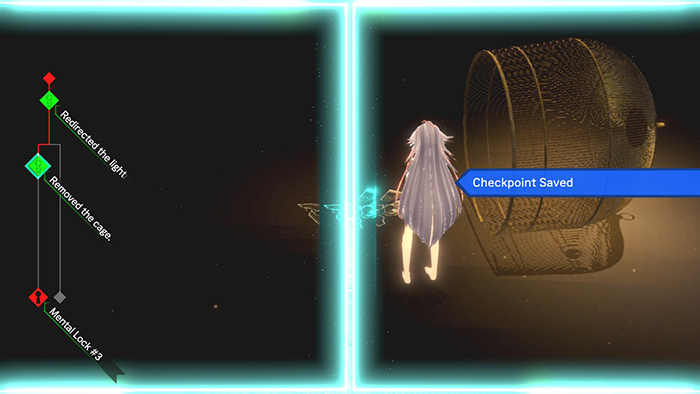 The game’s overall appearance is a vast improvement over Uchikoshi’s last game. Despite that fact, certain animations of the characters often feel delayed. Character models can appear fuzzy in the AI sight mode, but it’s not a deal-breaker as their portrait models look rather nice. However, the characters are much more expressive this time around. For example, if Date makes a very bad pun or is hitting on a woman, you can see characters like Mizuki act in disgust. This adds an extra amount of flavor to the scene. The music consists of progressive rock mixed with jazz beats for the most part of its soundtrack. A-set’s music is very cheesy but fits the idol character to a tee.

For Japanese adventure games, it’s no secret that they include a wide range of jokes. There are usually a few sexual innuendos jokes spread in the game, but that is not the case for AI: The Somnium Files. The game is overflowing with sexual innuendos. If this type of humor doesn’t resonate with you, you may not have an enjoyable time. That’s not to say that it isn’t the only humor in this game, but it is a large portion of it. Most of the main cast act like old friends who rip on each other. The exchanges between Date and Aiba are partially great.

The game rewards players who explore every inch of the background with optional hidden jokes. Each time you visit a place, you can interact with several objects. For example, every time you visit Lemniscate there is a magazine rack that you can interact with. The title of the magazine will change with each visit and characters will comment on that magazine. This becomes one of the many game’s running gags. There are some objects where Date will make up stories about, to see the full outcome of that running joke be sure to interact with that object each time you visit. This is a smart way to add even more character to this set of zany characters. 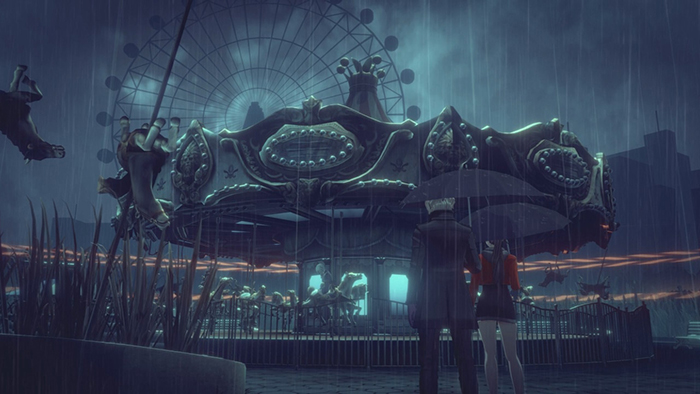 From completing the full story, the game doesn’t have a ton of replay value. However, there is artwork you can collect. During each somnium section, there is a hidden eyeball that can be found.  The reward for finding the hidden eyeball is an artwork. Also if you finish any somnium with at least one second you will receive an artwork for that as well.  This can take a bit of time to achieve as you have to have a clear plan in accomplishing that goal, wandering around aimlessly will seriously harm you.

Thanks to the lovely NumbSkull Games, a physical version of the game is available for purchase. The standard version includes the game and two vinyl stickers. ( $59.99) The Special Agent Edition will include an art book, soundtrack, a special box art cover, three vinyl stickers and one acrylic stand of everyone’s favorite internet idol, A-set. ($89.99) Due to unexpected demand, the United States release date for these versions was pushed back to September 24th. Europe’s (September 20th) and Japan’s ( September 19th) release dates have not been changed.

Although AI: The Somnium Files doesn’t reach the same level of creepy and disturbing events as the Zero Escape series, it does a wonderful job of taking its premise and utilizes it at the fullest level possible. There’s still plenty of weird and frightening scenes, so fans of the Zero Escape series will still feel right at home. The lack of replay value and humor may turn away some, but the compelling story and characters are enough to give people the desire to complete the game in full.