If the extremely specific fantasy of being a vampire hunter living in Japan sounds enticing, then you’re in luck. Akiba’s Trip: Hellbound and Debriefed is a ported version of the 2011 Japanese title that has made its way to the west for the first time a decade after its release. This game combines camp and pervy humor with unique combat mechanics to tell a story, and the player’s choices determine which side of the battle they fall on.

The player begins Akiba’s Trip in a back alley as the mostly-silent protagonist Nanashi (though the name is customizable). Nanashi goes to help a friend who was being attacked in an alley. He winds up in danger nearly killed by a Shadow Soul, human-like creatures who feed on the blood of humans and cannot be exposed to the sun for too long. Just as he’s near death, a young woman comes and gives him some of her blood, saving him from his horrible fate. 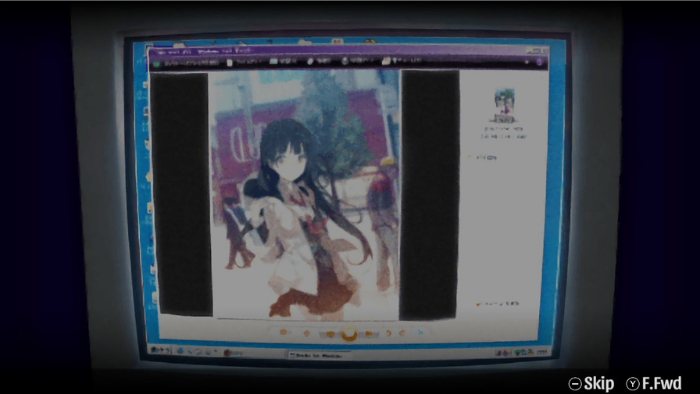 As his savior flees the scene, a group of friends known as “Akiba’s Freedom Fighters” show up to help save Nanashi at the same time as NIRO, an agency that works to protect Akihabara from the Shadow Souls. NIRO informs Nanashi that he, not only has become a Shadow Soul, but also that the blood he took was essentially that of the vampire’s royal bloodline making him incredibly strong. NIRO tasks the Freedom Fighters and Nanashi to help take down the Shadow Souls by learning how to strip people down to their underwear, exposing these vampires to the sun and killing them.

The majority of gameplay focuses on the battle system, which allows Nanashi to strip the clothes of Shadow Souls and humans alike. Depending on the difficulty level, players must either hit their opponents with a weapon to take off their clothes or target specific areas to damage a piece of clothing. The game also works on tank controls, which are not as common in modern games and may cause some confusion. This, combined with occasional button delays, can be frustrating and be the difference between life and death for Nanashi.

Across Akihabara are different manuals on how to expertly strip different kinds of clothing, and Nanashi will often need to make a trip to “The Master” to learn specific techniques for outfits like cosplay or school uniforms. The A, B, X, and Y buttons will allow you to attack your opponents, and at high enough difficulty each button only responds to a specific item of clothing on your enemy. If you manage to wear them down enough, holding the button will allow you to strip your opponent of that item and possibly start a strip chain. However, if you have not attacked the enemy enough, you will be entered into a tug of war for the clothing item that becomes frustratingly harder without appropriate upgrades. Searching for those upgrades can sometimes eat up a lot of time. Any item of clothing can be stripped with enough damage, however you will need to purchase guides on specific clothing types in order to pull the item off without tearing it. Combat relies heavily on needing to find the appropriate materials to succeed, so someone who dislikes min-maxing characters or fetch quest-like missions may find this part tedious. That being said, the battle system can work smoothly especially if you perfect the strip chain during a fight. 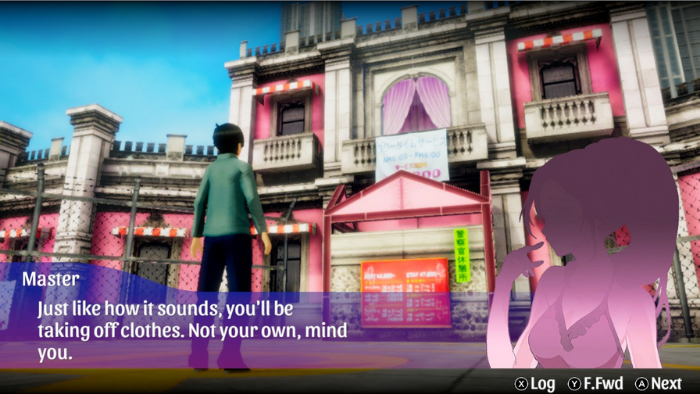 Akiba’s Trip provides multiple levels of difficulty. Upon first playthrough, you can choose from Easy, Casual and Gamer modes which determine how hard it is to strip clothing from your enemies and make your own clothes easier or harder to hit. The higher the difficulty, the more you will need to upgrade your gear and block incoming attacks effectively. After completing the game on Gamer mode, if you want a greater challenge, you may take on Otaku difficulty.

The game also contains a variety of extra mechanics, such as providing a room where your sister can buff an article of clothing or make the character extra durable. Several shops around the area sell upgrade materials which you can use to enhance a piece of clothing if you are particularly attached to it, and other items like a can of oden or UV sunscreen can buff attacks or allow an extra few seconds of protection beyond what clothes provide. Nanashi’s enemies are also attempting to strip him of his outfit, and since he is now a Shadow Soul as well, exposure to the sun means death. 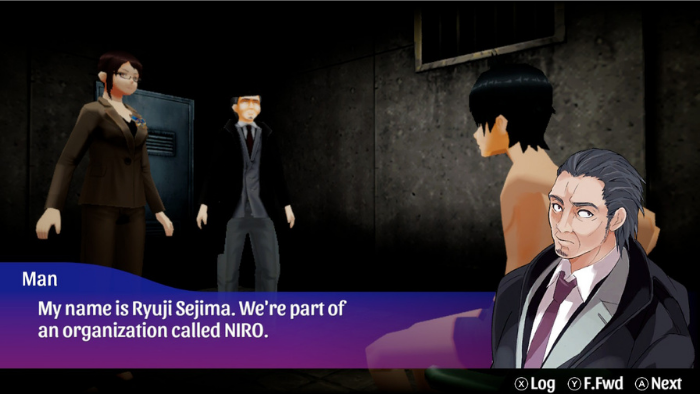 You can also make battles easier by changing or upgrading outfits and weapons. There are a variety of customizations found across the game in stores and during missions which often result in Nanashi fighting while wearing a ridiculous costume or while using a loaf of bread or computer monitor as his weapon. Pieces from the same set might not always be the best equipment you have in the game and may result in your character wearing a magical girl outfit with a frog hat or some other equally ridiculous combination. Better outfits and weapons are crucial to succeeding in the game, especially when facing multiple enemies at once during a battle.

Seeking out clothes and stripping manuals is one of the more unique things about Akiba’s Trip however. Akihabara works in a sort of sandbox format, allowing players to hop from place to place and explore the area. While you are somewhat limited in where you can explore in certain areas, you are still given quite a bit of leeway when it comes to searching through shops and interacting with NPCs. This includes beating up any random person you see on the street. Some may threaten you or ask for your help, and you can choose to comply or take them for all they’re worth. That being said, there is an internal meter within the game that monitors you’re reputation, and if you beat up too many bystanders, you might just find them running away from you.

While the game’s graphics are not particularly impressive and appear to not have changed much from the PSP release a decade ago, the 2D sprites are lovely and provide a lot of emotion to the supporting characters. Some of the character designs can be a bit lacking, especially when it comes to male characters, but Yuu and Sara’ models are standouts and provide a distinct silhouette. While there aren’t many special CGs included in the game, the ones that can be found in each ending are lovely and show off the characters in focus well.

Akiba’s Trip soundtrack is passable, providing a few interesting battle themes and a catchy song that plays upon entering every shop in Akihabara. With the exception of the ending songs and opening sequence, it leaves a lot to be desired, particularly when it is forced to be the backdrop to the voice acting. The performances range from passable to excellent and the cast features some voiceover heavyweights, like Chermi Leigh as NIRO agent Satoko Midou and Ericka Lindbeck as Shadow Soul princess Rui Fumizuki. These two are definitely the standouts of the entire cast. Unfortunately, this does highlight just how much of a silent protagonist the main character is especially during one-on-one scenes.

One of Akiba’s Trip’s greatest strengths is its replay value. The game contains three main routes depending on certain choices you make throughout the playthrough. Each one is a fully-contained story in itself and might leave players satisfied, but to get the whole story it is highly encouraged to play through all three main routes.

During the course of the game, there are several detours players can take. Side missions are offered organically during the story at times, while others will need to be manually sought out and can even change minor things during the main endings. It can be extremely easy to forgo these in favor of the core story, so an extra playthrough just to focus on the side missions might be beneficial to you. There are also a variety of other aspects one may focus on, such as arcade mini games and maid cafes, which in turn might unlock special battles with characters or secret endings otherwise not accessible. The game also encourages you to collect as many kinds of clothing as possible, which depending on your route, might take more than a few attempts to get them all. 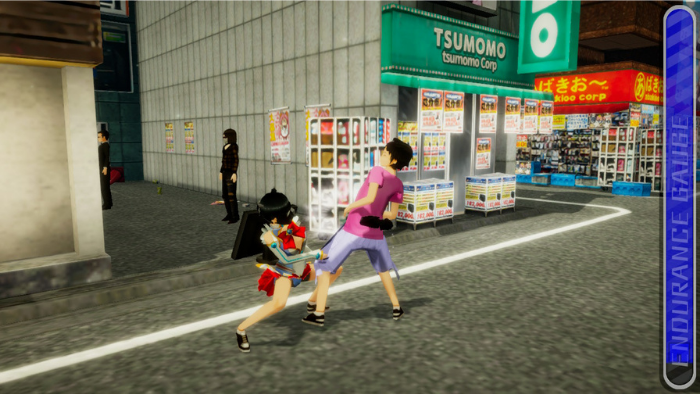 Akiba’s Trip also incorporates a sort of New Game Plus mode, where subsequent playthroughs allow you to keep equipment and skills for the new route as well as certain character models you might have unlocked in the previous run. These will make a new route easier if you want to tackle Gamer difficulty in order to unlock Otaku mode. However, certain other aspects like money do not carry over, so you won’t be sitting quite as cushy as you might like.

Akiba’s Trip: Hellbound and Debriefed is an interesting mix of pervy campy fun and genuine moral quandaries about who deserves to live and die. Most of the time, the game manages to balance the two aspects, but it does fall short at times causing some tonal whiplash, especially in side missions. Additionally, when characters are fleshed out, they feel real and compelling, but others are left as cookie-cutter stereotypes. For those of you looking for a simple game to sink several hours into, who like relatively simple brawlers, or who love to collect items in video games, Akiba’s Trip will satisfy. However, if you aren’t a fan of combat or get easily frustrated by messy controls, the story alone simply isn’t worth it. Additionally, anyone put off by innuendos should steer clear of the game. While there isn’t anything graphic, the game does play with the concept of stripping, so be on alert.