With eShop titles like Undead Bowling and Chain Blaster to their credit, G-Style Games have proven themselves to be a consistent developer so far. Their newest release on the eShop, Alien On The Run, stars a somewhat cute yellow alien named Delude who, while conducting his alien-y business (read: flying around in a UFO and wasting NASA’s resources) is kidnapped by another UFO.

Delude doesn’t take that lying down, though. He decides to escape. Only problem is, the kidnappers’ UFO has tractor beams that will beam him back up to his nemeses if he isn’t careful. This is where the gameplay comes in. 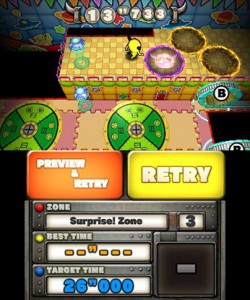 You take Delude through around 80 levels – with a time limit that, while it provides ample time in the first few levels, gets unforgivingly low in the last few ones – avoiding obstacles such as the indestructible and highly dangerous purple tractor beams, destroying yellow tractor beams to gain a few precious seconds of time, collecting chilli sauce and punching robotic punching bags out of the way before they punch you.

I couldn’t help but notice the similarities between this game and G-Style’s earlier release, Jump Trials Supreme. Both games are fast-paced puzzlers that allow you to preview the level before you begin. Both have a time limit on levels. But aside from a few similarities, Alien On The Run is quite different. The levels are in 3D (not that 3D, by the way; there is no visual 3D effect in this game), there are more obstacles, and it has a great sense of humour. 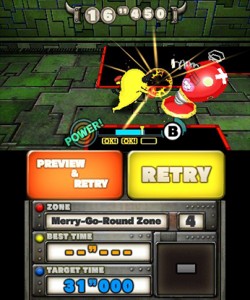 Case in point: every time you destroy a yellow tractor beam, Delude strikes a funny pose – cheerleading, bathing, and doing all sorts of crazy stuff. What’s cool is that these quick pauses that will often elicit a smile do not, somehow, manage to break up the fast pace of the game and you won’t lose time trying to reorient – except in the last levels, if you have a brain freeze as the timer approaches zero.

The cartoony art style and sound effects contribute substantially to the game’s humour, and the quick load times mean that the game is good to play in short bursts. The music is OK; the graphics for some objects are a little jagged but not bad to look at. The game controls very well, although the fancy names given to Delude’s moves may lead you to initially misunderstand the simplicity of the gameplay. All in all, Alien On The Run is a great puzzler that is well worth its small price.