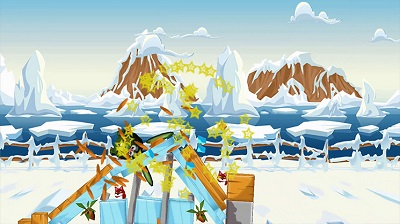 GAMEPLAY:
Angry Bunnies: Colossal Carrot Crusade is a physics based puzzle game and a port from the 3DS release. I don’t want to call it clone of Angry Birds mainly because the gameplay is more basic and the aiming is quite different, however, the name doesn’t help at all in this case.

‘Angry Bunnies’ offers a total of 150 levels distributed over five different worlds (this means 30 levels per world). On each level, you will throw your bunnies to the enemies’ structures in order to win (simple as that). If you use all your bunnies and there are still foxes alive, you lose the level and you will be required to restart.

Unlike other games of the same genre, this title in particular doesn’t include a score system. In order to add replay value, there are three carrots you can find in each level. Sadly, once you get them all there isn’t a big reason to play again. 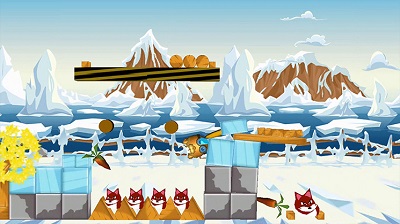 There are five different types of bunnies you can use:

In order to play, you need to use the tactile screen of the Gamepad to aim and throw the bunnies, sadly there’s a big flaw from the developers: there isn’t a TV-Off mode, and you are always forced to use both screens in order to play which can be annoying and also, a big missed opportunity.

An online leadboard is also included, however, it doesn’t help increase the game’s replay value, after all there’s no scoring system at all. 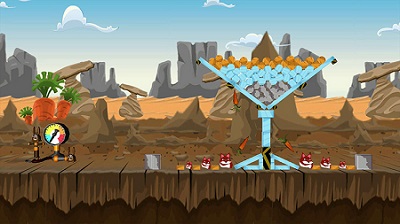 GRAPHICS AND SOUND:
Meanwhile the decoration for the level is nice and the artwork is great including the background themselves, the rest presents a little problem for the title.

The presence of pixelated textures isn’t a major problem, however, the models’ work is terrible, offering bad quality models even for a Nintendo 64 game. In addition, the fact the bunnies’ ears sometimes act a little crazy and the lack of animation for the models it just a let down for the title.

The soundtrack is also lacking, featuring two melodies depending on if you won or lost the level and the main theme, and meanwhile it’s quite normal for the genre, I would have asked for better voice acting for the bunnies (it’s a poor work in general).

PRESENTATION:
The presentation is quite simple but it does its job. The interface is easy to learn, you have sound options, a simple manual and some replay value, still for its price it can be quite better, including the controls of the game.

CONCLUSION:
Angry Bunnies is just a low budget title with many flaws that are easy to discover, however, it can be an interesting game while on a discount sale. Cypronia has better games available in both 3DS and Wii U eShops that you should consider getting instead.