When you start the game, it takes you right to the menu screen. One thing you may notice if you have the 3D slider all the way to the top is that the 3D effect is just too much for your eyes to handle. It would just be best if you played without the 3D effect, or else you might strain your eyes.As said before, this game has six mini-games to play from. Jewels, Bounce & Break, Impacts, Pop it Up, Swap, and Blocks are the six mini-games in this game. As the title suggests, these games are all classics remade with a 3D effect. 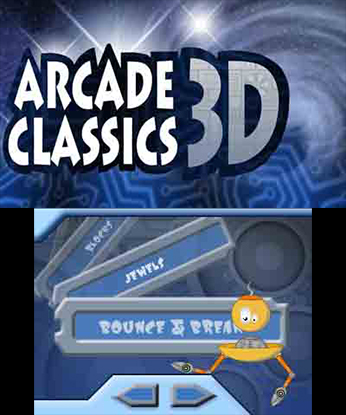 In Blocks, a random sequence of blocks fall down the playing field. The objective of the game is to manipulate these blocks by moving each one sideways and rotating it by 90 degree units, with the aim of creating a horizontal line of ten blocks without gaps. When such a line is created, it disappears, and any block above the deleted line will fall. When a certain number of lines are cleared, the game enters a new level. As the game progresses, each level causes the blocks to fall faster, and the game ends when the stack of blocks reaches the top of the playing field and no new blocks are able to enter. I found moving the blocks to be a little problematic, though. Mostly because the blocks fall down so slow, even when you press down on the circle pad to make it fall faster.

In Jewels, the objective of this game is to swap one gem with an adjacent gem to form a horizontal or vertical chain of three or more gems. Bonus points are given when chains of more than three identical gems are formed and when two chains are formed in one swap. Gems disappear when chains are formed and gems fall from the top to fill in gaps. I found myself not actually playing this game at all, because the game played itself. Everytime jewels would drop in, they would literally disappear over and over again, while I would gain points and progress to the next level. I really got bored of this, so I just stopped playing and moved on to the next game.

In Bounce & Break, The player controls a paddle which prevents a ball from falling from the playing field, attempting to bounce it against a number of bricks. The ball striking a brick causes the brick to disappear. When all the bricks are gone, the player goes to the next level, where another pattern of bricks appears. Power-ups may also appear when you break blocks, making your paddle longer, smaller, and even making it sticky so you can capture the ball and launch it again wherever you like. Problems that I found with this mini-game was the fact that when moving the paddle, it would move too quickly and it was pretty slippery as well. And also the speed of the falling power-ups were too slow. Sometimes they would even go through the paddle, which is very odd. 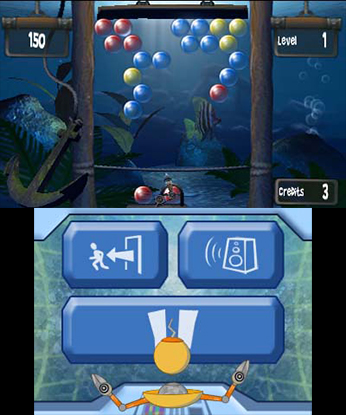 In Impacts, you are sent right in the game without any instructions. I literally died right after I was sent in the game because I didn’t know what to do. You basically have to blast space rocks, and if one hits you, you are dead. I found no problems with the game, except for the lack of instructions.

In Swap, you have to swap blocks to match the colored blocks next to them. It’s basically like Blocks. It even has the mini-game background as Blocks, so they really were lazy with this one. 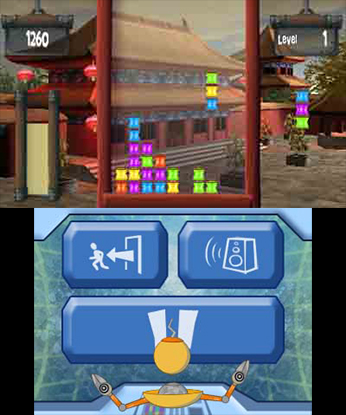 Overall, Arcade Classics 3D is not a very good game. With eye straining 3D effects, cloning of other games, not really adding anything new, reused music for almost all the mini-games, lack of creativity, and frustrating controls, this game is just not that great and is not worth the $2.99.