THE ARROW HAS ITS OWN TIME, AND IT’S THE TIME FOR THE ARROW 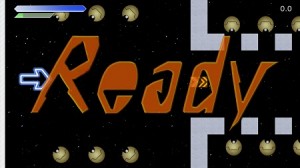 GAMEPLAY:
Arrow Time U is a puzzle maze game where you need to control an arrow on the space with a simple objective of locating the exit while trying to evade the game’s obstacles.  In the 40 levels of game, the obstacles include exploding mines, warp portals, walls and turret’s bullets.

Your arrow also has two special abilities that you will need to use to beat the level as quickly as possible: slow down the time allowing for faster reactions and being able to move through objects and walls. Those requires a power bar blocking you from being overpowered because it will run out fast.

With that in mind, you will be able to find replay value for the game: the faster you beat the level, the higher rank you will get. There are a few elements that make the game frustrating: getting damaged will make you lose health, but in this case, your health is also a time timer making you have to be very careful. 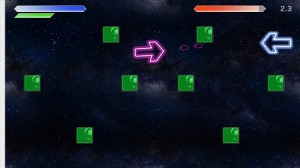 The problem is the game suffers from a bad or repetitive level design that gives a large amateur feek. There are also levels that are really creative, making the gameplay aspect a mixed bag that needs some polish work. The controls are great where you will use the L Stick and Control Pad to move and the ZR and ZL buttons for both powers. The R Stick also helps you to do another type of movement and with the correct use, it will allow you to move faster (or slower) and also help you to evade bullets.

GRAPHICS AND SOUND:
Arrow Time U doesn’t make a good work graphically mostly because it lacks of variety on the game’s elements, including the fact that all the walls are gray, making the game look repetitive and boring, however, the level’s backgrounds are nice. 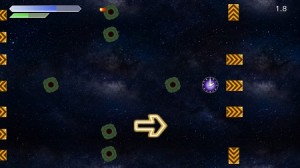 The soundtrack presents a few tracks which are enjoyable, however, they will feel repetitive due to the fact you are only listening to the first half 10-20 seconds of them every time. The sound quality isn’t good and there are times where a lot of sounds will play at the same time which is annoying, including a low quality voice that repeats every time you start a level.

PRESENTATION:
The presentation of the game is quite poor and somehow unprofessional, including small details that weren’t fixed, for example the black transition from the title menu to the level selection one isn’t placed well, a turret with a wrong behavior on level 31 and some wrong warps are examples of that. Some replay value is present and the game’s interface is easy to use, including a few hints in certain levels.

CONCLUSION:
It isn’t a bad game, the idea is interesting and the potential is there, however, its short duration, low polish work and a frustrating experience makes the Arrow Time U hard to recommend. It isn’t a terrible purchase if you want something different if it’s on a discount sale.

The developer confirmed on Miiverse an update is in the works which should fix some of the stuff I mentioned here. An update will be made once it has been released.