While a lot of us live in comfortable situations, a lot of the human population isn’t that lucky. For them, every day is a struggle to survive, and any resource could mean the difference between life or death. On the other hand, the more fortunate ones may have a life loaded with troubles, and survival might never be an issue, however, if an apocalypse were to happen, the playing field would be leveled, and all would be equally likely to perish. Ashwalkers allows players to simulate this experience. In this survival journey, any choice could mean the difference between life or death. Let’s check if the game is successful in this effort.

Years after a volcanic eruption left the earth a barren, ash-covered wasteland, humanity is stretched thin. Some suffer in the outside world, some hidden in Domes. One such Dome, the Citadel, is on the verge of collapse. They select a squad to search for the legendary Dome Of Domes, to seek a new haven for the people. Thus, Petra the captain, Sinh the warrior, Kali the diplomat, and Nadir the scout set out to find this refuge. They will be confronted with the harsh conditions of the barren planet and the cruelty of other survivors.

For once, it’s refreshing to see a catastrophe caused by volcanic disaster. There are so many nuclear, alien, or zombie apocalypses in games, it gets tiring. It’s good to call attention to other potential world-ending events. It keeps the story grounded. The many peoples and creatures the squad encounter challenge morality and decision-making skills, personalizing the journey. As such, there are 34 different endings to unlock, with each playthrough taking two hours to complete. We’ll talk more about the endings when we cover the choices.

In order to survive the cold ash-covered earth, players will need to adapt to any situation they find themselves in. Choices will determine whether they’ll make it to the promised Dome of Domes or die trying. These decisions are not only related to the individual morals of each player, but also the player’s personal resourcefulness.

Exploration is straightforward; players walk straightforwardly on a linear path. Along the road, they will discover logs to expand knowledge of the road. These can be reread in the encyclopedia, however, the main concern will be resource deposits. By interacting with them and spending energy, players can take their supplies. Players can also camp at any point in your journey (with some exceptions) to use their loot.

In total, there are five resources to manage: satiety, warmth, energy, hope, and health. The former three are drained over time while exploring, and when any of them hits zero, the character loses HP. The resources can be replenished using supplies collected in the overworld: food, combustibles, and medicine. But if any squad members’ health hits zero, they die and are lost for the rest of the playthrough. If three team members die, the game is over.

This is the main aspect of gameplay: players must make sure to be prepared for any eventuality while trying to make it to fight another day. Any decision must be calculated in order to reach the end. Resource gauges may deplete really fast in any situation, and events could throw players for a loop. One may be forced to expend food to resolve a situation for instance, or their mental state may influence the actions of a character. As such, players will need to choose their words carefully.

The harsh Outside world leaves all of its inhabitants struggling to survive. Both animals and humans just want to live another day, just like the squad. As such, players will be competing with them, recourse or collaboration? The choice is up to the player.

Every member of the squad has a different role, with a different specialty. Petra prefers to use strategy, while Sinh prefers to solve dilemmas with his fists. Kali excels at diplomacy, but Nadir stays out of sight and goes for stealthy approaches. When walking around, players can be interrupted at any point. They might encounter a human, or predatory animal. Then offered with a choice, each corresponds with the job of each of the squad members. As such, there is a big variety of options to resolve a situation. Not every choice has massive impact on the story, but some might aid you later down the line. On the other hand, players might need to surrender some of your resources in order to get out of tricky situations. 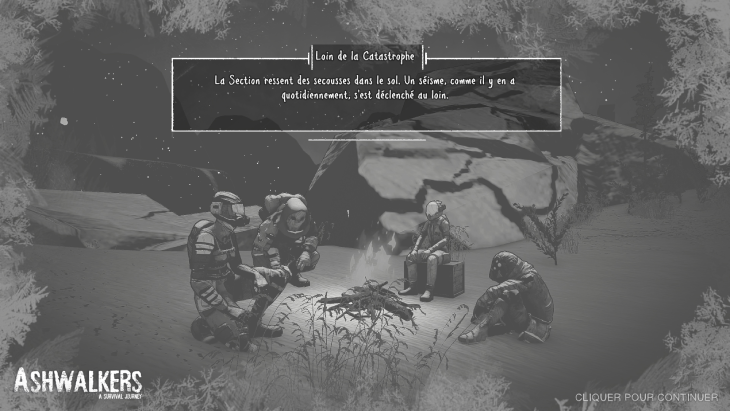 Translation: “The Squad feels the earth shaking. An earthquake, a regular occurrence here, has been triggered in the distance.” Random events keep players on their toes at all times.

Storytellers often use the idea “show don’t tell” to portray scenes. It’s used to portray a scene by showing the reader, rather than just using text. This is a strategy that Ashwalkers isn’t that familiar with. All events are portrayed by blocks of texts, and the only visuals accompanying it are your Squad members, and the shades of other creatures. Sure, the writing is great and diverse, but that’s not good enough to carry the experience. It’s a shame, because the story had the potential to be fantastic.

It would seem natural that trekking through a destroyed wilderness would be a dreadful experience, and that is correct. The biggest problem of the game is beyond a doubt the controls. As with any other title, use the left stick to move, but it’s possible to get stuck while moving. The only thing to do in this situation is switch active characters to resolve it.

Likely a relic from the PC version of the game, players can move characters by clicking a location on the screen to walk to. It controls like a point and click, so characters can’t go to locations where they shouldn’t, unless specifically instructed to. Considering there is a lot of walking in this game, it might not be worth it to go for all 34 endings. Walking is slow as well, and players will often have to traverse massive areas by foot. Additionally, the menu’s feel clunky to navigate, and not being able to use the D-pad in them feels frustrating.

For those wanting to 100% this game, they’ll need to get all 34 endings. With how the controls are, that might seem like a chore. Well, it is, but after beating the game once, custom mode is unlocked. It allows starting subsequent playthroughs at any point preferred.

The world may be in ruin, but its beauty has survived the apocalypse. The game has a black and white art style, with the exception being red error messages, and most importantly, blood. This style works incredibly well to sell its depressing and deadly atmosphere. Each member of the squad has a distinctive design making their portraits easily recognizable. The other humans and beasts, like mentioned before, are designed to look like shadowy figures. It has a minimal effect on the story, but it does help the atmosphere. The soundtrack has some ambient tunes that carries this uneasy and somber feeling, perfect for a game like this.

Trekking through the wilderness is no small feat, an experience that the developers of Ashwalkers have simulated quite well. Any choice made in the Outside will need to be made carefully, lest players won’t make it to the Dome Of Domes. The choice system is well put together, but a lack of visuals to accompany them does hurt the story. The clunky controls also hold the game back from being an amazing survival journey.

A professional at being bad at games and discovering new obsessions, Natan has played all types of games ever since he started gaming by playing Skylanders on the Wii. He's currently studying linguistics and aspires to one day write for a video game.