Has anyone ever told you, you shouldn’t attack a person while they are down? Astral Chain tells you the exact opposite. If you aren’t attacking someone while they are pinned down in this game, then you are playing Astral Chain wrong. Is this game another great masterpiece for Platinum Games or is it simply a novel concept?

It’s the year 2078 and human life as we know it is almost extinct. The last remaining humans reside in this man-made island called The Ark. Chimeras are the awful vicious beasts that are destroying the world. Chimeras do this by kidnapping people and taking them back to the Astral Plane and by infecting everything with their red matter that causes massive side effects. It’s up to the Neuron police squad to take them down. The Neuron police squad has special tamed chained chimeras (also known as legions) that act as their partner. You play as a newcomer recruit that quickly gets in over their head as an unthinkable situation has happened. Members of the Neuron police squad lose their precious legions and it’s up to you to save the lost legions and the world. 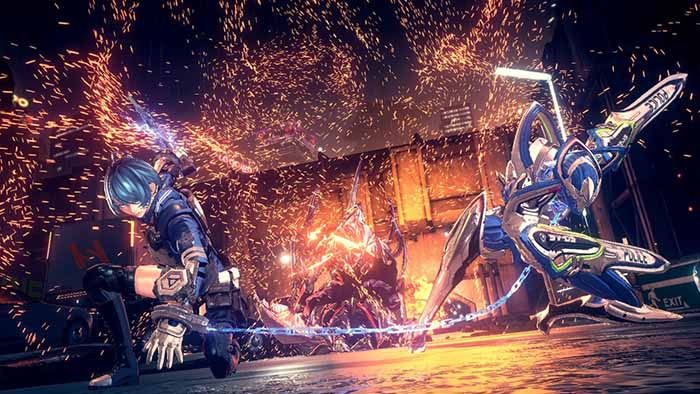 Astral Chain’s gameplay can be broken down into two main sections, which are investigations and combat. Usually, the combat is the clear main focus in Platinum Games’ games. This time around investigations is a considerable amount of gameplay. Investigations are the slower pace sections of the two gameplay modes, but they offer a decent variety of tasks that you can do. Some investigation parts can take up an hour or more.

During investigations, you must search for clues. You can do this by exploring the area with your legions and interviewing people. The player’s IRIS function allows them to find hidden clues. You can eavesdrop on people by having your legion tail them and chase after wanted suspects. Sidequests are also available to take part in at this time. Sidequests can range from inspecting haunting dumpsters to carrying a comically tall ice cream cone without spilling any ice cream. To move on from the investigation phase, players must gather keywords on the current event. You will be given a quiz once all the keywords are found, you need to complete this quiz to move on. So pay attention, as this can affect your ranking score. 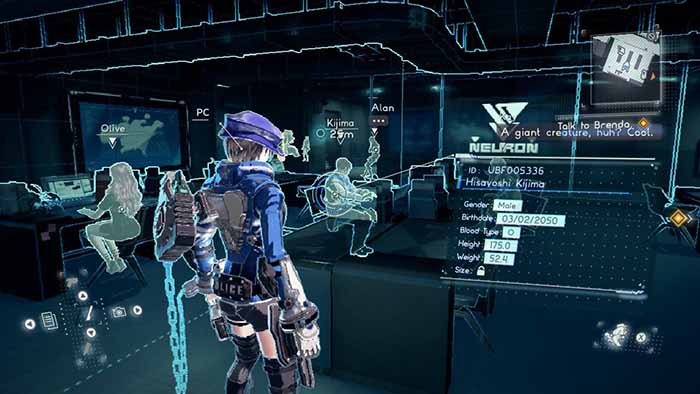 The other form of gameplay is traditional action combat. You and your legion will travel between areas encountering large swarms of chimeras, huge epic boss fights, solving puzzles and experiencing set pieces that will make you full of adrenaline. Legions cannot stay out indefinitely, they are tied to your Legatus meter. You can upgrade your Legatus and baton. Swamping between all of your legions is the best way to experience combat. Combat feels fresh and exciting as you have so many choices in how to attack.

Legions are your crime-fighting partner in battle. There are five different legions that you can use, which are sword, arrow, arms, axe, and beast. Every type feels and acts different and cycling through your legion feels seamless. There are times where you need to use a specific legion to solve a puzzle or to take down an enemy more efficiently.

Your character does not have a skill tree. Instead, your legions do. Fill out their skill trees to give them even more power and to also gain new assign skills that can be used in battle. They range from having the skill to auto-bind a group of enemies to shooting a rain of arrows on a path. You can apply abilities to your legions as well. Abilities such as improving critical hits, anti-stun and attack boost are some of the many available abilities. After an intense battle, make sure to perform maintenance on your legion so it’s back in top fighting shape. 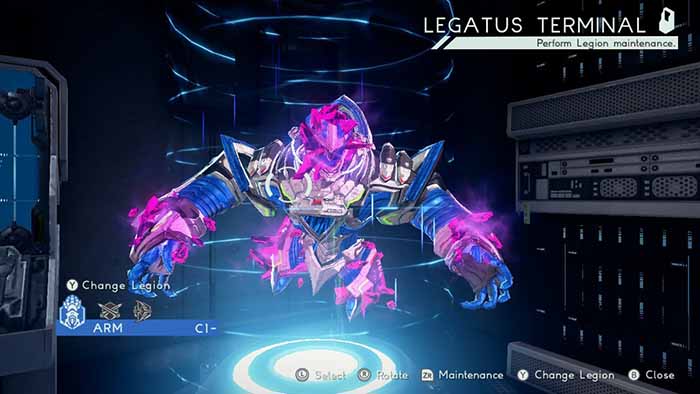 Astral Chain has a very unorthodox control layout since you control two characters. To call out your legion, press the ZL button and if you hold down that button you can control the legion with the right stick. Legions can be instantly changed by pressing the Y button. If a legion must be dismissed, press the R button. Pressing L lets you use that particular legion’s action.

The main character can dodge with the B button, use items with the X button, and is controlled by the left joystick. Press the joystick in to run. Instead of using the A or B button to attack, the attack button is mapped to ZR. The main character’s weapon is a baton that can transform into a gun or a heavy large sword. To cycle through these other options, players must use up and bottom on the D-pad. Some may have noticed that there has been no talk of a jump command. The main character cannot jump on their own, instead, they launch themselves at their legion. If your legion is far enough you can jump to them by holding the ZL button and then press the ZR button.

It’s highly advised to spend time in the training room to get the basic controls down. The training room also explains deeper combat mechanics such as chaining your enemy, performing a clothesline and moving around pillars. There is a learning curve to getting the combat system down, but if you put in the effort, it is a gratifying ride. If you are still having trouble, you can change the difficulty setting to Unchained mode. Unchained mode lets the game deal with the legion’s actions.

The world is filled with cyber-punk asthenic, most things in the world have a neon-bright glow to it. The music also matches this by having a soundtrack that is half techno and half rock. The game is dazzling in motion. The Ark is interesting enough to explore, but the same cannot be said about the Astral Plane. The Astral Plane just looks so similar no matter which part you enter. It makes remembering certain parts of the game difficult. A cool aspect of the Astral Plane is the puzzle segments. For instance, there might be a wire that needs to be cut so you will use the sword legion to cut it. It adds another layer of depth to these sections. However, some platforming sections just seem out of place.

Most of the characters do not stand out. Lappy, the Neuron police mascot, easily steals the spotlight whenever he appears on the screen. The biggest blunder of the presentation is the main character. This time around, you play as a silent protagonist. Whenever cutscenes happen they instantly lose impact as your character does not speak. It’s out of place as everyone around you speaks and act of their own free will. Platinum Games have made fantastic lead characters before, it’s a shame they opt for a silent protagonist. Players can dress their character and legions through a large range of clothes and skin colors. 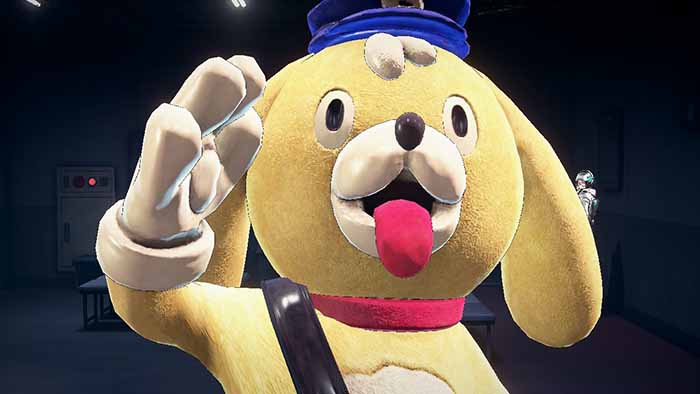 Like any Platinum Games’ game, there is a ranking system. The ranking system is only available on the Platinum Standard difficulty level (Which is selectable after you do the first case file). This difficulty level only gives you two revives and you must fully control your legions. Unlike past Platinum Games’ games, this ranking system is much more forgiving. You can achieve the highest-ranking of S+ even if you use healing items. The way to maximized your scores is to use different types of legions in battle and to do the investigation side quests. You can go back to any file case by accessing your PC. You will be able to use any new upgrades or legions when you reattempt to improve your score.

Players can improve replay levels to improve their ranking, complete side quests, find lost cats and search for hidden toilets. Some levels have sections that are not accessible the first time around, once you have the right legion you can explore that section. The game contains a form of achievements through Orders. These achievements range from performing a move a certain number of times to taking photos of certain people/bosses. You can gain a variety of rewards by completing orders. There are 185 orders in all, so there’s plenty to complete. Taking snapshots is another form of replay value as it fills out the game’s encyclopedia.

Astral Chain continues the tradition of Platinum Games’ excellent combat gameplay. The game is a blend of all of Platinum Games’ unique ideas that manifested into one game. Astral Chain sticks most of its landing, but there are a few downsides. The story is better than their usual output, but fans looking for a deeper storyline should keep their expectations in check. Smaller quirks such as a silent protagonist and questionable platforming sections take away some of the greatness from the game. If you put the time into the combat system, you will be immensely rewarded. Actions and sci-fi fans are in for a treat thanks to the combat and large boss set pieces.