Most people tremble in fear when a crisis is at hand and they have no idea how to solve it. When the world is burning (not literally) and the effects are beginning to take fruition, people try to find any means of survival in their last stand, further crippling the unfortunate souls who are unable to afford the luxury. Then, there are the people who still have hope in discovering a viable solution to the matter to set things back on track and give everyone hope again, prolonging humanity’s existence.

Atelier Shallie: Alchemists of the Dusk Sea DX concludes the story of the Dusk trilogy after the events of Atelier Escha & Logy. Water supplies from around the world are drying up, droughts scorch the planet, and a strange phenomenon changes the sea to sand, causing plants and creatures to succumb to their end.

The story mixed in with dialogue from all of the characters will likely keep most players entertained, especially if they played the first two games of the trilogy before this one. A little comedy and drama are mixed into the fray, as usual, enhancing the experience.

Even more characters can have their appearances changed in Atelier Shallie DX, however, some of them take a hit with their wardrobe. There are still many accessories to choose from although costumes can be lacking for some. Then, there are specific characters who do not get access to accessories at all.

On the bright side, for the people who like a little fanservice, if you want to have a party of females in their swimsuit kicking butt, this game delivers, and early at it too. New clothing options are unlocked along the way, however, there is no way to tell what’s new when they’re added, therefore a thorough scan through the list will be required with every update. It can be annoying, but manageable.

Similar to Atelier Escha & Logy, players can choose between two of the main protagonists in Atelier Shallie. Both protagonists have their advantages and disadvantages, however, it’s up to the player to discover them on their own as no information is displayed when deciding between the two. The story is unraveled through the chosen character’s perspective with many characters to recruit during the journey.

With no time limit hanging over your head, the game lets you play at your own pace. There’s more time to enjoy exploring, gathering, and synthesizing. Casual players will find it a relief while the hardcore players might find themselves breezing through the chapters.

As either Shallistera or Shallotte, your main objective in the game will be completing life tasks. Imagine it as your to-do list, so you’ll always know what you need to do next and choose accordingly. These life tasks, when completed, can improve some aspects of the protagonist and allow you to continue onto the next chapter. It’s a little confusing to understand at first with the way it forcefully ends the current chapter you’re on, but it’s easy to get accustomed to.

It’s normal to want to make the best weapons to use for your characters at the earliest opportunity you get. That can sometimes be a bad idea if you choose to go that route because some of the life tasks ask to make specific weapons again after you made them already. It’s not as bad as it sounds because there are alternative choices to choose from, but there is no need to make the same low-level equipment over if it’s already in your possession, as it just goes to waste (although it can be sold). The other life tasks are fun enough to challenge yourself into completing them all.

The life task menu also takes its fine time to open on the Nintendo Switch version of the game. It can cause a minor inconvenience to impatient individuals because it’s a menu you’ll want to open up regularly to check what needs to be done to progress further in the game. You may also find yourself getting stuck on where to go more often, but the accomplishing-feeling of figuring it out is well worth it.

The synthesis system in Atelier Shallie: Alchemists of the Dusk Sea DX is a little different and it may take some time to adapt to it. It’s not difficult to master the system because all it takes is practice and reading what everything does. No unreasonable requirements are imposed upon players, making for a relaxing time accompanied by music, yet portraying the urge to synthesize ’em all.

Atelier Shallie: Alchemists of the Dusk Sea DX follows the other games in the trilogy with the way how enemies are shown moving in the overworld. Swinging at them gives you the advantage and when your level is higher, it instakills without the need for a battle.

The game has three difficulty modes to choose from at the beginning:

Story Watcher, as its name suggests, is for players who want to enjoy the story without challenging foes in their path. The enemies have reduced HP and stats, therefore they’re easy to deal with on the battlefield. Game Fan is the default difficulty for the game, meant for the average player who wants to enjoy both story and gameplay. Hardcore slightly increases the enemy’s HP and stats, while also giving them an enhanced skill. It’s for players who want the most challenge out of the game, but it also rewards them with more money, EXP, and loot drops. 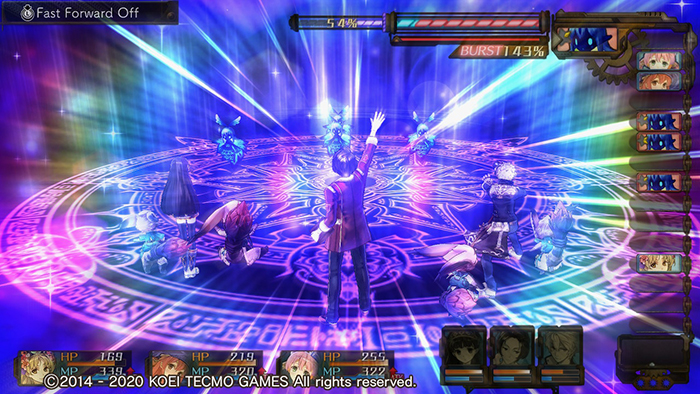 Fights aren’t too tough when playing on the Game Fan difficulty, but enemies can seem beefy on the HP a majority of the time. This gives players the full experience of the game’s combat system, with its stylish animated attack scenes, link attacks, and ultimate moves; yes, you don’t have to wait to fight a boss to take advantage of your ultimate moves this time. It’s certainly an upgrade to Atelier Escha & Logy’s battle system, changing up some of the mechanics and making some additions. There’s a lot of fun to be had here but it can sometimes deplenish with the continuous prolonged battles.

There is a decent amount of enemies to fight against and a reasonable amount of bosses and mini-bosses in the game, however, it can be a handful to find some of the optional bosses to fight. It’s easy to miss them unless thoroughly searching the areas of the world. The battle results screen after a battle has a short waiting period before you can proceed, making it impossible to skip which can be annoying at times.

More eye candy is brought to Atelier Shallie: Alchemists of the Dusk Sea DX while maintaining its ear-pleasing, melodic tunes. The sad melodious music fits in perfectly with the dying world and can jump to heartwarming in the appropriate cutscenes. It meshes nicely when everything comes together, resulting in a great experience to be had.

The game supports both English and Japanese voice acting, just like its two other siblings in the trilogy. The English voice acting is great, however, one of the characters has an abnormally lower tone compared to the rest in tabletop mode. This is likely an audio issue rather than the voice acting itself. It does go away when playing with the Nintendo Switch docked.

The game isn’t truly over after beating it even though there is no post-game content. There are multiple endings to see and another protagonist’s perspective to play from in New Game+, opening up replay opportunities. Unlocking the true ending requires a run-through of New Game+, therefore it’s a requirement for players who want to view the true ending of the game.

With a superior combat system, melodic music that fits in nicely with the world, and an entertaining story with memorable characters, Atelier Shallie: Alchemists of the Dusk Sea DX is a great game to play for both casual and hardcore players alike. Its to-do list has its downsides, battles can feel extended at times, and costume content is lacking, but it still does not take away from the majority of fun to be had.

Atelier Shallie: Alchemists of the Dusk Sea DX gets an 8.5/10.