I was convinced to buy this 3DS eShop exclusive game when my friend posted about it. I watched the promotional video and thought, “Hey, is this another Ghibli Studio-made like Ni no Kuni?” Oh it’s Level-5 again, mates. While it is a compilation game from Guild02 and was not developed by Level-5 alone (it’s Kaz Ayabe and this was his first game released outside Japan), it’s still an awesome game.

Attack of the Friday Monsters takes us into a 4th grade student’s perspective, Sohta Tohno, witnessing kaiju (monsters including Godzilla) appearing in his small town.  Being from a child’s perspective, this game offers a different experience from the traditional kaiju themed movies you may be used to due to the non-heroic take offered by a child. 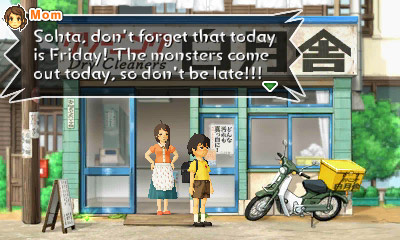 This game takes on the form of a simple “real life” simulation game where you do not eat.  It’s worth mentioning you still learn your favorite food which is melon bread.  In Attack of the Friday Monsters, you spend your time walking around the town, talking with neighbors, collecting monster glims (which you use to build monster cards), and playing the monster card game with gangs of elementary kids in an attempt to be the best.  The dialogue is lovable and fits with the game nicely.  You see lots of children arguing over whether the Kaiju you encounter on Fridays is real or television made.  Parents also play a huge role in convincing their children one way or another.  It really warmed my heart! 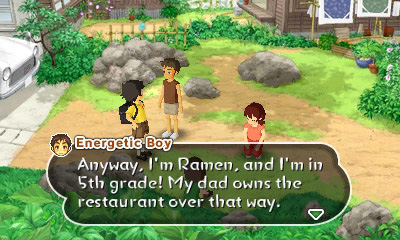 Though you will not find any dating event (as you expect from most life simulation games), Kaz Ayabe, the game designer, put his whole heart to design the simulation aspect so it felt so realistic: the train station and its announcement (ha!), the radio sound, boss-and-servant role play (this is cute)… I really love how the visual perspective differs in each place. The character illustrations is Ghibli-like. The length of the game itself is short, approximately 3 hours to finish (in my case it was 5 hours), but the story will not betray your expectation. The music composition is great and peaceful, especially the opening theme. The opening song is cheerful, I think. This game just lacked voice acting, sadly, and I was hoping to hear kids’ voices there. But it is okay – US$7.99 was worth to spend. You’re a genius, Kaz!

PS: you do not need any Guild01 save data to unlock Linked Content. Just finish every episode and it will surprise yourself. I was surprised, too.