It’s not every day that a (good) game based on an anime comes to the US. In Japan, they’re getting SAO games, Danganronpa games, and all kinds of games based on popular anime. Here in the US, we get repetitive Naruto fighting games, a couple of Bleach games, and the occasional One Piece/Dragon Ball Z game. Regardless of how popular an anime becomes over here, the main market for gaming like that is overseas; no matter how much I hate to admit that. But when some anime starts to get English dubs, how much more popular can it get? What more has to be done to prove it has a market in the US? Well, for Attack on Titan, it took English dubbed episodes AND a video game. But it’s not just any video game; it’s a great one.

Atlus is known for making JRPGs, so putting an AoT game in their hands automatically means expectations are set high; and they exceeded my expectations. Though I haven’t been a fan of the series for very long, I’ve watched the anime all the way through, and the entire time all I was thinking was “This would make a really good game”. Now that I’ve actually gotten to play it, my words have finally been proven true: Attack on Titan + Atlus = a really great game.

Let’s get to the part that you’re all waiting to read: the actual game. Right before you get to the main menu, the opening theme for the first 15 (or so) episodes of AoT plays, along with the opening cut scene. Needless to say, I was already beyond pumped up, even before playing the game. After the intro, it takes you to the menu screen, where you can select Story Mode/World Mode/Extras (you must play through a few Story missions before unlocking World Mode, so at the beginning there’s only one available mode). In Story Mode, you find 5 playable characters from the anime: Eren Jaeger, Mikasa Ackermann, Armin Arlelt, Levi, and Sasha Braus. While a lot of them share the same missions, they’re all played through varying points of view depending on which character you play as.

Before unlocking another character, you must play Eren’s first mission (I also recommend you play the next 3 of his also, as he’s the only one with tutorial missions that teach you how to play the game). After that, you unlock Mikasa’s mission set, and as you play through a couple of hers, you start to unlock the rest of the missions (so eventually, you’re able to pick and choose which character’s missions you want to play at which point in time). Once you’ve beaten all of one character’s missions, the ability to change every character’s clothes becomes unlocked. Also, exclusively to Eren’s mission set, you are able to play as a titan. The controls for the titan attacks/movement are much more simplified, as they don’t use ODM gear; they just run and attack. So after learning the basic controls, you go beat up other titans for awhile and then you win (I’ve never lost as Titan, though I’m sure it’s possible..it’s just quite hard). 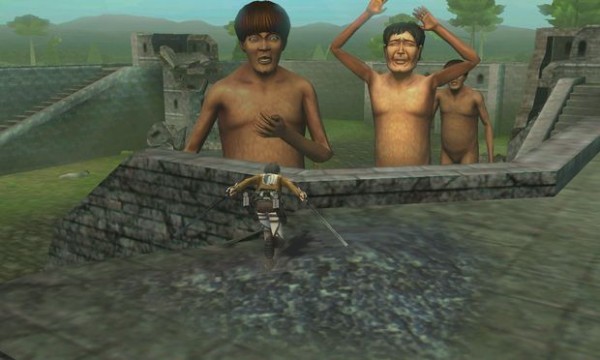 While playing as a character (in human form), you can either use ODM gear to move around or a horse (depending on the mission). The controls for the ODM gear is actually much more simplified then I thought it would be. You can run around on the ground if you want (better to throw off the Titans when you’re close), but it’s a lot more fun and thrilling to fly through the streets swinging from your ODM gear. You can press R to swing, and you can hold it mid-swing to propel forward while using a lot of gas. If you keep R held down, you’ll continue to swing in the direction you’re heading (but you can change direction while swinging with the joystick, so it’s very easy and smooth). I honestly thought that in order to perfect a system like this, it would be very complex and require using the touch screen, but there is very little if any touch screen interaction. It just works so well.

The missions in Story mode are all battles that actually happened during the anime, so if you aren’t familiar with the anime, it’s probably best that you watch it before you play the game. It’s not required, but it’ll make you all more familiar with the universe, thus making your experience 4x better. In World Mode, though, you have the ability to create your own character (no, seriously, full customization AND pre-made sets depicting characters that didn’t make it as characters in Story Mode) and do a bunch of different missions, ranging from saving fallen teammates to looking for items scattered throughout the map while fighting off Titans. This is mostly where the RPG aspect comes in to play, as you can level up your character which gives you skill points that you can apply to 5 stats: Slashing, Shooting, Maneuvering, Strength, and Defense. You get 2 ‘Growth Points’ every level, but after you get your skills to level 2, it takes 3 Growth Points to level them up again. You can also collect Steel Coins to buy consumables to help you in your battles, collect materials during the missions to craft new gear, and complete Normal missions to gain ‘Troops’, which are required to play Scout missions. 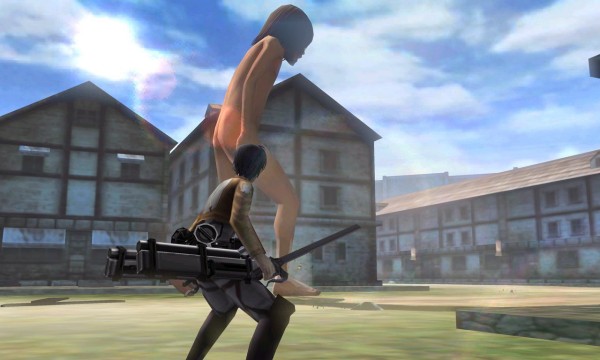 In World Mode, besides Singleplayer, you have the option of playing local or online Multiplayer with up to 3 other people. This is helpful if you’re stuck on a mission and you need assistance from actual players. There are two types of missions: Normal and Scout. Normal missions are your typical missions (mostly filled with the same objectives as the Story missions), while Scout missions are very difficult missions that require you to lose some of your ‘troops’ in order to play (think of it as an entry fee), so win or lose you’ll be losing some troops. This is where Multiplayer is encouraged, since the missions are twice as difficult as the normal ones, and having human players alongside you makes it so much easier; especially if you can put together a good team.

One of the best things about Attack on Titan: Humanity in Chains (for me, at least), is that while you’re fighting, familiar songs from the anime will play in the background. So not only does it have a fantastic soundtrack, but the songs pumped me up incredibly, and made me even more hype to play the game. This may sound weird, but sometimes when I was losing, a heavier part of a song would come on, and I would start doing completely better, and sometimes even go on to win the mission (thank you heavy metal Japenese-English songs!). 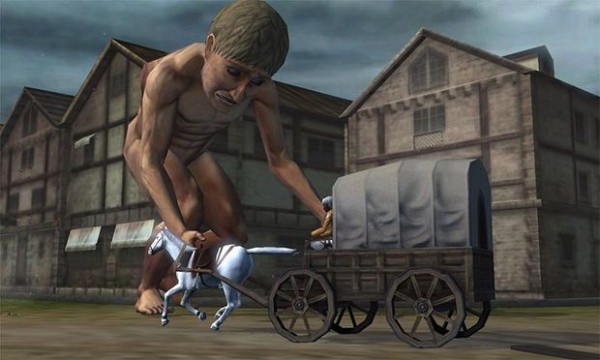 One of my main concerns in this game, though, is the AI. There are some missions where you’ll be alone, and some missions where you’ll have a squad of 3 others helping you out; but it never feels like you’re not alone. Occasionally, if the AI is near you, they may cut you loose if a Titan has grabbed you..but other than that, they don’t really do much. They follow you if you move anywhere, and sometimes they’ll attack if you do, but about 95% of the time, you’re doing all of the work yourself.

Overall, Attack on Titan: Humanity in Chains gets an 8/10 for me. This game is a must have for any AoT fan. Sometimes it’s difficult to make the camera obey (a lot of L button pressing), and most of the time, unless you’re playing with human players, it always feels like you’re alone and that you don’t actually have help. But it makes up for that with the replayability in World Mode, and the thrilling movement system. This was a game that I was able to enjoy all the way through to the end of Story Mode and then some in World Mode. Again, watching the anime will make this game all the more familiar to you, but it’s not necessary. If you’re a fan of the anime, or you just love to swing around on wires, then this game is for you.