ATV Fever features 3 core game modes: Championship, in which players race in more of a tournament style setting, Free Play, where players can choose and pick any given race track they want and try and get a good time record, and Arcade, which includes three separate modes we’ll get into later.

Free Play is, well, put simply, Free Play. There’s no real reason for Free Play to exist other than to let you check out and tracks from the Championships you want to explore a bit more (not that there is a single drop of exploration in any of the tracks), although I guess if you’re bored it can be interesting to mess around in. You can also change the weather in Free Play, which is a nice addition but sadly it doesn’t change much.

Arcade is interesting to say the least. It’s comprised of three separate modes; Speedster, Rocket, and Supersonic. Now, during my time playing through the 3 modes, I never saw one difference between the three. Maybe I’m blind, but the modes are incredibly similar. Arcade itself is a good game mode by itself though, the goal is to get through each lap as fast as possible due to there being a clock ticking, and for every lap you complete you receive an additional amount of time. It’s not extremely innovative or fresh or anything, but it’s fun to pick up and play.

Drifting in this game is difficult. More times than not I’ll end up drifting into a wall, and honestly, I think just going slower around corners is your best bet, although still, you’ll make some mistakes. Hitting corners is the only reason this game has a shred of difficulty; everything else you can possibly lose from is the CPU’s catching up, and if you’re an experienced gamer, that won’t happen. I promise.

Boosting in this game is fun! The game itself is honestly a bit slow, but boosting makes up for that…or does it? Well, somewhat. Boosting would make ATV Fever a much more fast paced experience if there was a meter. That’s right, there’s no boost meter. You just have to keep hitting the L button until you randomly have it again. I honestly have no clue what brings your boost back up, but the lack of a meter that tells you if you have it charged up is very annoying. 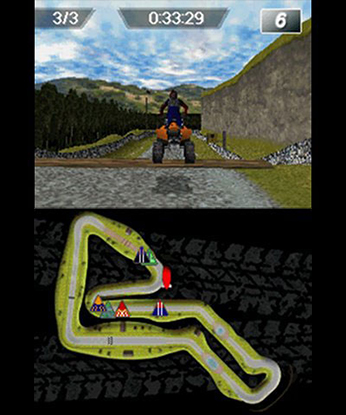 Before I start, let me remind you that this is a DSiWare game. I’m going to be basing everything here against other DSiWare games, because it would obviously be unfair to compare to an eShop game.

ATV Fever looks decent. The textures look a bit sloppy and a lot of the tracks look very similar, but I’ve seen worse. Honestly, it’s probably one of the best looking DSiWare games I own; but it begs the question. It’s been 3 years since the launch of the eShop…so why wasn’t it created for it instead? This game would’ve looked great in 3D. But still, the game looks good for what it is.

The features your typical every day rock n’ roll soundtrack. Sadly it doesn’t fit with the game very well. It’s decent but could be better. Another issue that involves the soundtrack is your bikes engine. The music is almost entirely overshadowed by the sound of your engine which is extremely annoying.

The audio is, as I said before, decent for what Enjoy Gaming was working with. Yes, it sounds a bit messy, but let’s be honest; almost all DSiWare games sound messy. 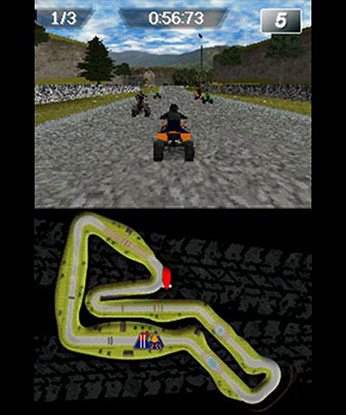 Other than that, not much else can be said about ATV Fever’s replay value. Yes, Free Play is interesting if you have absolutely nothing else to do, but once you complete this game there is absolutely nothing else that makes you want to come back besides the achievements. The game would have highly benefited from an online multiplayer mode; the only problem with that would be the servers being inactive.

ATV Fever isn’t perfect by any stretch of the word. The drifting is difficult to control, but other than that, there’s no real challenge. If you’re an experienced player, look for one of the eShop’s other ATV based games; but until then, ATV Fever will make a great present for a child.