ATV Quad Kings is a decent title at best. The game features 3 game modes; World Tour, where players race in a set number of tracks for the first place trophy, Arcade, where players can race on any course within the game that they want and set the number of laps, and Time Trial, where players can test their skills and try to get the best possible time on any given track.

World Tour is set up interestingly; for every tour you advance 2 races are added. By the time you’re on the final tour you’re doing 12 races and, although some may find it good, that’s a lot of races to do at once. Yes, you can pause in between races and pick up and play later thankfully, but the game would have benefited if each tour had a set amount of races, say 5, for example. By the time I was halfway through Pro tour, I was getting extremely tired of the game. There isn’t much variety between tracks and honestly, that’s extremely important. 12 races would be fine if every track within the game were unique from one another, but half the tracks are repeats and that does get old fast.

Arcade basically exists for the sole purpose of you getting more in-game cash (which can be used to buy new ATV’s). This isn’t bad or anything, although it’d be nicer if they had added some trophies in Arcade mode or something to spice it up a bit.

Time Trial is extremely basic; they’re time trials. For whatever reason tracks within Time Trial have 4 laps, while the aforementioned World Tour features 3 laps per track. This isn’t a bad thing or anything, it’s just strange. Also for whatever reason Time Trial only displays your best lap time on the menu instead of the full time it took to complete the track. I’ve no idea why they decided to design it like that; so for anyone that wants to seriously play this game and get good times, make sure to write down or take a screenshot at the end of a race before exiting or you’ll lose it forever.

Difficulty in ATV Quad Kings is also improved. Instead of being set into one difficulty, you get to choose between Easy, Medium, and Hard. While Easy and Medium are still incredibly easy, Hard is at least a challenge. Thankfully if one difficulty is too hard or too easy for you, the game allows you to change it at any time. 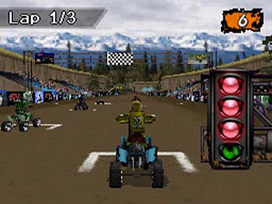 Although the game controls much better than its companion ATV Fever, there’s still room for improvement. The A button allows you to move forward, B is brake, R is for drifting and L is for boosting. It’s also worth noting that touching the touch screen allows you to toggle from a map showing player locations to more of an information screen, allowing you to see how fast you’re going and lap times.

Drifting is still lacking, although luckily this time you can turn around corners easier. Either I’m doing it extremely wrong, or drifting truly doesn’t work, but when I attempt to drift, I end up slamming into a wall. This would be a minor flaw in most games, however ATV Quad Kings punishes you greatly if you so much as touch a wall. You’re bike is brought to a complete stop and getting acceleration back up takes a while.

Boosting in ATV Quad Kings is greatly improved over ATV Fever. Despite the lack of a traditional meter showing if you have your boost yet, Enjoy Gaming instead added little tokens across the tracks that allow you to boost upon collecting one. Sadly the tokens are often in far out places that you aren’t likely to get unless you specifically head for it, but you should be fine getting them on the second lap.

For a DSiWare game, ATV Quad Kings looks great. No, it doesn’t look as good as a full retail DS game, but it still looks good for what the game is worth. Some, if not all of the tracks use the same textures, which does begin looking pretty repetitive after an extended period of play time.

To the games dismay it mostly has the same song spread across several tracks, although some of the songs did get me humming them for a while (and that’s a good thing). Although your bikes engine overpowers the sound of the soundtrack greatly, you can still hear it fine. 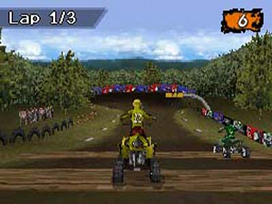 As mentioned above, ATV Quad Kings features a Time Trial mode. Time Trial is definitely a great mode for people that don’t get tired of playing a game over and over, but if you get tired of a game fast Time Trial will be extremely pointless to you.

Also mentioned briefly above was the fact that the game features in-game cash. Cash can be used to purchase new ATV’s, but that’s it. More ATV’s is never a bad thing, but by the time you’ve gotten enough cash for all of them you won’t have anything to try them out on.

ATV Quad Kings is a much more well-rounded game compared to its companion ATV Fever, although drifting is still pointless and the Arcade mode is solely for the purpose of getting more cash. The graphics are great for a DSiWare title and the soundtrack is catchy. It could have a large number of improvements and it certainly isn’t a must own game, but for those of you looking for an ATV Racer game, it’s definitely worth checking out.