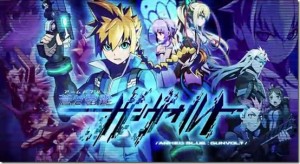 If you played the Megaman ZX series you would be familiar with the graphics of this game because it’s in 2D pixel graphics. However, it isn’t the 8-bit style retro remakes every indie studio is jumping on the bandwagon. Instead it is a refreshing roar that 2D games are still alive and kicking. The animations are smooth, the character designs resemble the typical japanese animation art form, and the level designs are slick. The User Interface is very user friendly allowing even the most novice of video game players to easily navigate the menus.

The game revolves around the concept of “adapts” which are basically super-powered humans that can control abilities unique to them. In response to these adepts, an Illuminati-esque, Sumeragi corporation rose up and took control of the world’s energy source, in the guise of defense. You are Geeves, or the Azure Striker Gunvolt, a powerful adapt that can manipulate electricity. Gunvolt, by the orders of Quill, rebel group against Sumeragi, needs to get rid of the Muse program, a sonar for adepts, but the Muse was actually another adept named Joule (get it? because joule is equal to the energy expended in passing an electric current of one ampere through a resistance of one ohm for one second.) After you rescue Joule and take her into your home, you continue the fight against the Sumeragi corporation through multiple missions, fighting the bosses each with their own themed stages. The story is loosely based on a future, bladerunner-esque world, with the typical JRPG tropes, however; the story does have a bad ending and a good ending which creates a more complex plot.

There are just layers upon layers of depth in this game, there are 2 main areas of gameplay, the combat, and the customization.  The combat revolves around your gun and electricity, while alone they don’t deal much damage, combined makes Gunvolt an force to be reckoned with. You “tag” enemies with your gun, which allows you to send direct currents of electricity to whatever you tagged. You can tag up to 3 times for maximum electric output on a single enemy, but with different guns awarded for completing a mission, you’ll be able to tag multiple enemies. Of course you can’t just spam your electricity forever so you have an EP meter, basically an energy bar. As you complete missions and defeat enemies you will level up and increase your HP and sometimes gain new skills. The skills could range from offensive skills such as a sword made of lighting or supportive skills that can help you recover health or recover EP quickly, The game really shines at the adept boss battles, while it lacks in the platforming sections. The level’s artstyle is great, but with repetitive enemies and average platforming sections it detracts from it. When you do reach the end, the bosses are the real meat of missions, because they are refreshing and unique. No longer are the old bosses that control boring powers such as fire, or ice, now they control magnetism and creates black-holes to attack you. In fact another boss controls the power of dimensions and uses it to fire lasers from any direction.

Of course with boss battles, cheap deaths follow, where some attacks are impossible to dodge, or some of them cause instant death. It’s frustrating but deaths don’t really matter in this game, because there are no lives or continues you just start at a checkpoint again. It works of a multiplier system called kudos. If you get hit your multiplier points reset even if you have the prevasion dodge mechanic. The mission’s focus is not on completing the level, but how well you can complete said level, such as how fast you can complete it, or can you complete it without getting hit. It is basically a score attack game after you finish the plot, and deaths only detract from your score.
The 2nd area of gameplay is between the missions, in the home menu, where you can customize your skills, gear, challenges, and “synth” materials to create more gear. At the end of every level your score and time will determine how well you completed the mission with the highest rank being a S+. The higher the level the more chances you get at choosing “synth” materials to take home at the end. With rare materials you can craft some gear that give you the ability to double jump or air dash. The challenges give you extra requirements, such as completing the stage within 4 minutes or get a B rank or higher, when you complete it you are rewarded with rare crafting materials.

If you’re a fan of action platformers this game is a must buy for you. For the general video gamer, it’s still a decent purchase if you’re longing for a Megaman game and Mighty N.9 is too far away. All in all for a eShop game priced at $15 with an extra bonus game Mighty Gunvolt; it is a worthy purchase for any one looking to add to their collection. With amazing combat, and interesting boss battles, Azure Striker Gunvolt is an amazing game but marred by ho-hum platforming, repetitive enemy design, and short length. It scores an 85 out of 100. A sequel that expands content and addresses the issues would be fantastic.