TREVA Entertainment GmbH are a publisher that’s brought almost every kind of pet sim to the Nintendo eShop (there’s even a baby simulator. Creepy, huh?). Speaking of which, My Baby Pet Hotel 3D is a pet sim of every kind. That means it’s a cat, dog, horse, bird, and even rodent sim rolled into one.

The backstory, told through the manual, has you seeing there’s a job opportunity for pet resort owner in Cutesville, and of course you jump all over it. After a tutorial, you walk around – yes, you walk around manually, there’s no auto-transporting to this place or that in this game – the resort, entering each type of animal’s pen and looking after them. Clients come in, drop off their pets for a few days, and leave you to pamper them. You feed them, make sure they’re happy, and get them exercise as well. You generate an income proportional to how many days you kept the pet and how well you treated it. If an animal is poorly treated, it falls sick and you have to give it medicine or call the vet. You can leave the resort to go to the town square, where you can go to the store to buy food and treats or head for the town hall to accept tasks: milestones like, “Pet this type of pet this many times.” 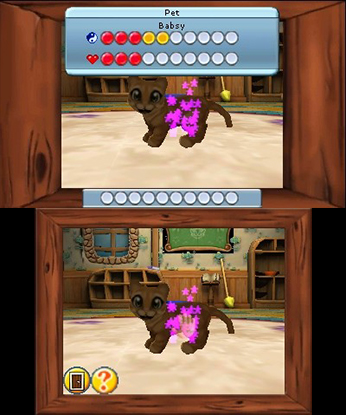 Walking around the resort is something I hadn’t seen in any other pet simulator, and while it was fun at first it just became time-consuming and cumbersome later on. The tank controls – the girl (you can’t play as a boy in the game; you’re a girl by default. Take that, manly men) goes in full-on reverse when you move backwards – will bring a quasi-nostalgic shudder to anyone who played the early Resident Evil games. She also turns very slowly if you stop and turn, oddly, but turns pretty normal while you’re walking (sweet relief!). Apart from that, the game had collision detection basically everywhere that wasn’t on ‘the path’, apart from some parts in the middle. You can’t even walk over the grass while trying to reach a pen. And when I did take the long way around and reach the pen, I couldn’t move any further even though there were at least three metres between me and the door, though pressing the A button or touching the icon that popped up on the bottom-left of the screen at that point does get you in. It didn’t break the game, of course, but it made it feel rough and unpolished.

Speaking of unpolished, the text in this game is like that in a poorly localized game. Once you’re done pampering your pet in any respect, for example, the game says, “The animal quality is optimal!” which, apart from being very weird, makes it sound like the animal runs on an just-tuned engine. 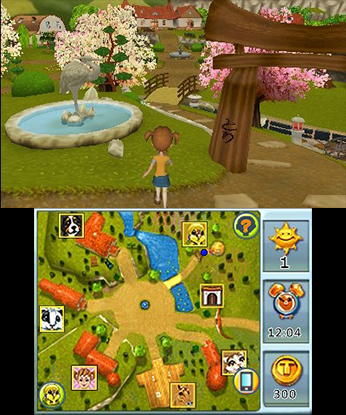 So let’s get on to the actual pet sim stuff. You interact with your pet on the touch screen in ways like feeding them, rewarding them, cleaning them or petting them. All you have to take care of is that you don’t brush their fur the wrong way. Not a great deal of intelligence is required, but it’s meant to be a relaxing game. The way the 3D screen is under-utilized is something to complain about. All it shows is everything that’s already shown on the touch screen, plus lights from red to green indicating how well your pet is. Most pet sims have you interacting with the animal’s silhouette on the touch screen and watching them on the upper screen, which works better. The 3D screen and touchscreen showing the same thing just feels half-hearted on the developer’s part.

So it’s just endless going to bed early (I can’t imagine any player not going to bed early in this game), getting up and doing it all over again. You clean the pens as well apart from caring for your pets, and that’s all there is to it. The 3D effect is almost unnoticeable: it’s not the pop-out effect but the looking-through-a-window effect. The visuals are decent; the music relaxing and completely forgettable.

My Baby Pet Hotel 3D might keep a younger child amused for quite a while, but for older gamers it’s a very time-consuming, cumbersome affair. The fact that it costs ten whole dollars more than some of the retail pet sims TREVA Entertainment GmbH’s brought to the Nintendo eShop doesn’t help either. Even if you have a younger one who doesn’t get bored easily, the high price gets in the way of deciding to buy it. What’s even more regrettable is that if My Baby Pet Hotel 3D had spent some more time in development and come out a more refined game, it’d have been really good for what it aims to be – a pet sim of every kind. That didn’t happen though, so if you’re looking for a pet sim, you should look at some of the other ones on the eShop.