The first major boss you will encounter to fight and defeat in Shin Megami Tensei IV: Apocalypse is King Frost. King Frost is a level 17 tyrant race demon. This guide helps you defeat him so you can move on with the game. 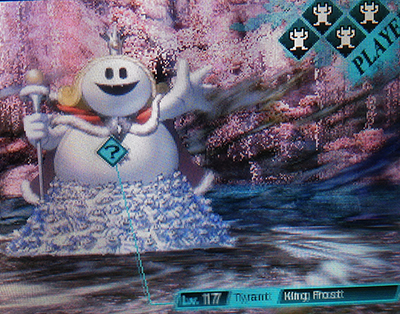 King Frost’s weakness and how to defeat him :

As his appearance suggests, he is weak to fire attacks and blocks ice attacks.

Before approaching him, go to the black market weapons shop in the Central Underground District of Ueno. Purchase the Blue Marine (it’s really cheap) and equip it to gain resistance against ice type skills.

Go back to the Fairy Forest and navigate back to wear you found King Frost (don’t enter yet). You will need to find a demon who has fire skills. In the same area, you will find a demon known as Hua Po who knows the fire skill Agi. You can search for multiple of her kind and use her as an offensive demon, fuse her with the fire skill to make a stronger demon and pass down the fire skill to your protagonist so you can have a fighting chance against King Frost. Alternatively, the protagonist can use an Agi stone for fire damage via items menu during battle. 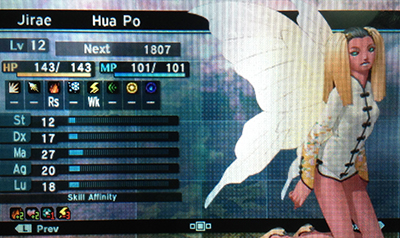 When the battle begins to go in your favor, King Frost may use the skill Smile Charge to gain a free smirk to combine it with his all-out ice skill attack which hits all players in your party. If you come across a skill that removes the enemy’s smirk when leveling up one of your demons (It’s called Magaon and I think Hooligan learns it on level up), it will be a wise decision to keep it for this battle.

Getting down to the battle :

You should have a full gauge to make King Frost waste his first turn before engaging battle. Hit him with as many fire skills as possible during that time and remember to swap out any of your party members that are weak to ice skills because once he gains the upper hand, you will likely lose the battle.

If you can remove his smirk with Magaon, the smirk cancelling skill (if your demon has it), you will stand a batter chance against him, however, it isn’t necessary to take the giant snowman down. Fire skills may not seriously affect him with his smirk enabled, but the more damage you deal to him while resisting his ice attacks will eventually reduce him to liquid.