Krishna is a level 60 demon of the Deity race and he is the known leader of the Divine Powers. You will be required to fight him for the ‘Defeat Divine Powers’ quests (second time you meet for the quest) at Tsukiji Konganji near the Ginza district in in Shin Megami Tensei IV: Apocalypse.

This guide helps you defeat him.

How To Beat Krishna in Shin Megami Tensei 4: Apocalypse 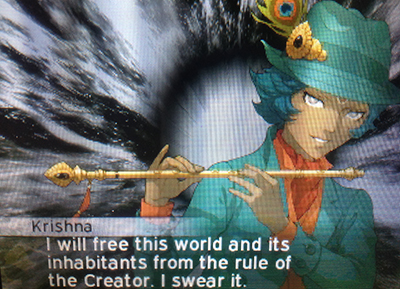 His weakness and resistance :

Krishna is weak against dark skills and has resistance to light skills. Everything else hits him neutrally, however, it will be extremely difficult to hit him with a skill that mutes his magic skills, gets him sick/poisoned, etc (to the point of having the skill null).

Preparing before the battle :

Krishna’s skills are listed below :

Make sure that your armor protects you from electric and/or force skills and that your demons have no weaknesses to them. In addition, if you get access to an accessory which prevents your protagonist from status ailments such as sleep/stun/etc, equip it.

Using the magic repealing skill (Makarakarn) will force Krishna to use his status ailment skills more (although he still uses it regardless) and his almighty skills over Ziodyne and Zandyne.

Skills that lower his stats will also be beneficial to you since he increases them with Combat Tara. Switching demons regularly or using a skill that remove stat buffs will also help you during your battle as your attacking skills might do little to no damage in time.

Isabeau or Asahi will be the recommended partners to choose from during your battle.

He asks you a question during battle :

After Krishna loses a fraction of his HP, he will ask you to drop your weapons and take his hand because he thinks you are fighting for the same reason as he is. You will have one of the options to choose from :

If you lack healing (eg. Mediarama) and stat debuffing skills (eg. Dekunda) in your party, you may find your protagonist dying a lot during the battle, therefore you should keep some reviving demons in your party just in case to revive him (unless you have the skills mentioned).