Mother Harlot is the strongest fiend you will come across in Twisted Tokyo and she gave me a run for my money even though my protagonist was level 99. I was debating about writing guides for the fiends in Tokyo, however, some might need one to defeat Mother Harlot. 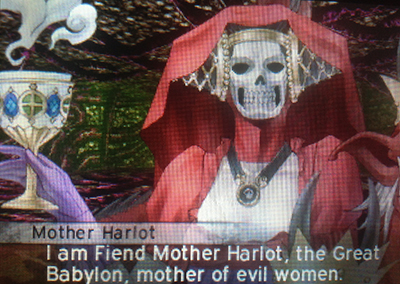 How To Beat Mother Harlot in Shin Megami Tensei 4: Apocalypse

First, you should know Mother Harlot is weak against force skills. This information alone is not sufficient enough to survive the battle against her. In addition, she drains electric skills, nulls physical attacks and has resistance against dark and light skills.

There is no doubt about it. You will need Navarre as your partner for his support. You will need his skills to increase your team’s maximum HP, defense, evade/hit-rate as well as his debuffing skills toward the enemy.

The strategy to defeat Mother Harlot

You need a majority of your party members with force skills that hit heavily or severely (severe is recommended). The only party member that does not necessarily need a force skill is your healer. This healer needs to have a skill that restores most/all HP to all allies on the field as well as have a skill that revives them if they fall in battle. It is also important for this healer to have a lot of HP to tank hits.

You’re going to need debuffing skills on your demons and/or protagonist. Navarre will do his best to support your team but while he increases your stats, you should lower Mother Harlot’s stats so you to take more of her attacks and even evade them, resulting in her losing actions.

Luster Candy and Debilitate are two of the best moves for this situation.

What to do when battling :

Before engaging her in battle, make sure your assist gauge is full and you have a magic repelling skill.

When she does attack, you should be able to survive and she may miss. Use your healer to recover your injured teammates’ HP and keep using force skills. If she uses her skill to recover from the stat loss, keep using them again because she doesn’t do it often.

You might have to battle her 2-3 times to finally defeat her using this method. I got kicked out of Twisted Tokyo once and the second time we met on the battlefield, I defeated her.