Vishnu-Flynn is a level 87 deity you will have to fight in the Cosmic Egg when playing Shin Megami Tensei IV: Apocalypse. This guide shows you what weaknesses he may have and how to defeat him. 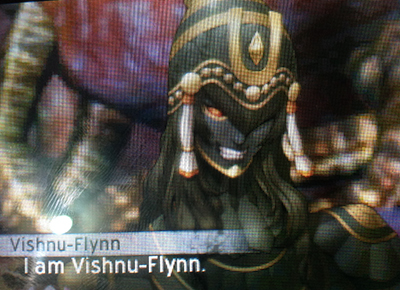 How To Beat Vishnu-Flynn in SMT IV: Apocalypse

Vishnu-Flynn’s weakness in the game

Unfortunately, he does not have a weakness off the bat. He does block dark skills, however, everything else hits him neutrally. In addition, there are two ways for him to get a weakness (will be explained later down).

During your battle with him, Flynn will try to regain consciousness and Isabeau will ask what you’re going to do. You will have three options to choose from :

At this point, Vishnu-Flynn will change his form and gain two new skills. These skills, although powerful, have disadvantages to them and open up a weakness to the user.

Skills when form changes (all pierces through resistance/null) :

Just in case you’re low on HP, it will be wise to have light and dark stone items.

How to defeat him :

You’re going to have to lower his stats. I’m talking about attack and defense, maybe even hit/evade rate. Getting greedy and using a skill to lower his stats more than once will likely trigger him to use his Dekunda skill which changes back his stats to normal, so try not to do that (however, he stops using it a lot after changing his form so take note of that).

Try not to have weaknesses he can exploit either. Those free smirks and extra turns can be the end of you.

It is also important that you have demons that can revive your fallen teammates, especially your protagonist. My protagonist fell in battle once while up against him but thankfully I had Samarecarm on one of my demons that were left alive at the end of his turn.

Survive his hits, heal or revive when necessary and wait for him to get his weakness. From there, use dark/light items with your protagonist and light/dark skills from your demons to take him down. After he changes his form, he uses Dekunda less so make sure to constantly lower his stats at that point. With lowered stats, neutral damaging skills hit him hard as well.