Figuring out how to play Hoops Mode in ARMS (for the Nintendo Switch) is pretty easy right off the bat. You would have just assumed that you have to grab the opponent, right? Well… instead of just dodging and grabbing, you can do a few other ways too. In this guide we’ll give you some of the best recommended gloves and tips in this games mode.

First, you’ll want to know that most light gloves are still at an advantage because they are pretty easy to use and they aren’t too slow to grab. You’ll want to avoid most of the big gloves as they are slow. In Hoops Mode, both players have infinite health so attacking each other with small punches is not an ideal tactic or strategy.

Below mentions some of the best gloves to use in Hoops Mode.

Coolerang and Sparky gloves are the next best alternatives. Coolerang uses Ice Element and Sparky uses Electric Element. Like Chilla and Thunderbird, they’re both gloves that can be used to temporarily slowdown your opponent. 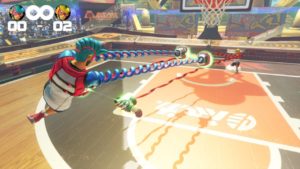 If you do not have the above gloves as unlocks for your favorite characters, you can play as the default characters that come with them.

Grabbing and dodging are not the only aim in this mode. You can also use your Rush! Just be sure to fill up your Rush Gauge with many punches, including missed punches. The last hit will always be the hit to throw your opponent onto a Spring platform and into the Hoop. 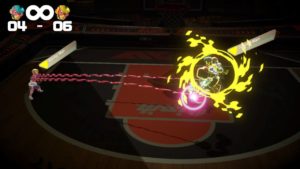 Theoretically any character can be played and have the advantage as long as you use the right gloves. Not knowing how to use gloves to your advantage may be your disadvantage in most case. Don’t forget to always dodge and use the Spring platform to jump high! Practice makes Perfect!