Edmund McMillen’s Binding of Isaac series is a tough challenge to put into words. The series originally started as a concept from a week-long game jam, using inspiration from Shigeru Miyamoto and the first Zelda game for the procedural dungeons. McMillen wanted to share his experience with religion from his life for the story. To take a quote from a postmortem he did about the first game from 2012: “I wanted Isaac to embody this duality I experienced with religion. I wanted it to show the positive and negative effects it had on me as a child — the self-hate and isolation it instilled in me, but also the dark creativity it inspired.”. The story explores multiple themes including some very dark and controversial ones, from child neglect to gender identity to how religion can negatively affect children.

The story is a simple enough tale, it’s loosely based off of a hebrew biblical tale of the same name. Isaac lives happily with his mother until one day she hears a “voice from above” which tells her that her son is corrupted by sin and she should remove everything evil from him. This leads her to take away all of his toys, drawings and clothes. The voice speaks once more to Isaac’s mother, this time however telling her that she should be cut off from all evil, and so she locks him in his room. The voice questioning her devotion, and finally requests that she kills Isaac as a sacrifice. Isaac watches through a crack in his door as she prepares, and in a panic he finds a trap door in his room. Right as his door bursts open, he jumps down. This is where the game begins. More story is told via the loading screens in between levels with crudely drawn animations of multiple bad things that have happened to Isaac over his life along with the 13 endings which offer even more story. 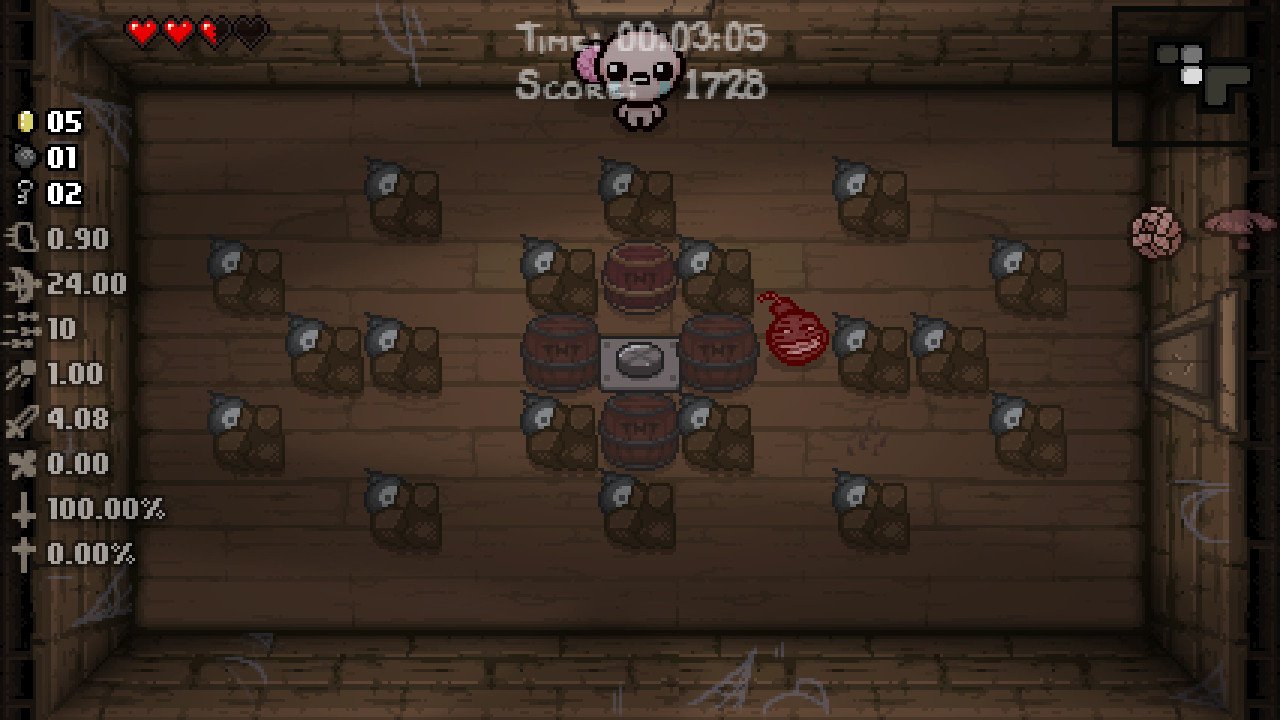 The gameplay is the main course of this game. It is a massive rogue-like dungeon crawler with seemingly no end. You can pick up the game and play for short 10-15 min bursts, or play for hours. The controls are fluid and simple, it’s got an essence of a twin-stick shooter to it. Left stick and/or d-pad is movement, right stick and/or face buttons are directional shooting (no diagonal shooting unless you have the item for it), left bumper for bombs, right bumper for 1-use items, left trigger for active item. If you play in portable mode, you can also tap on the map, 1-use items, etc to active them as well. 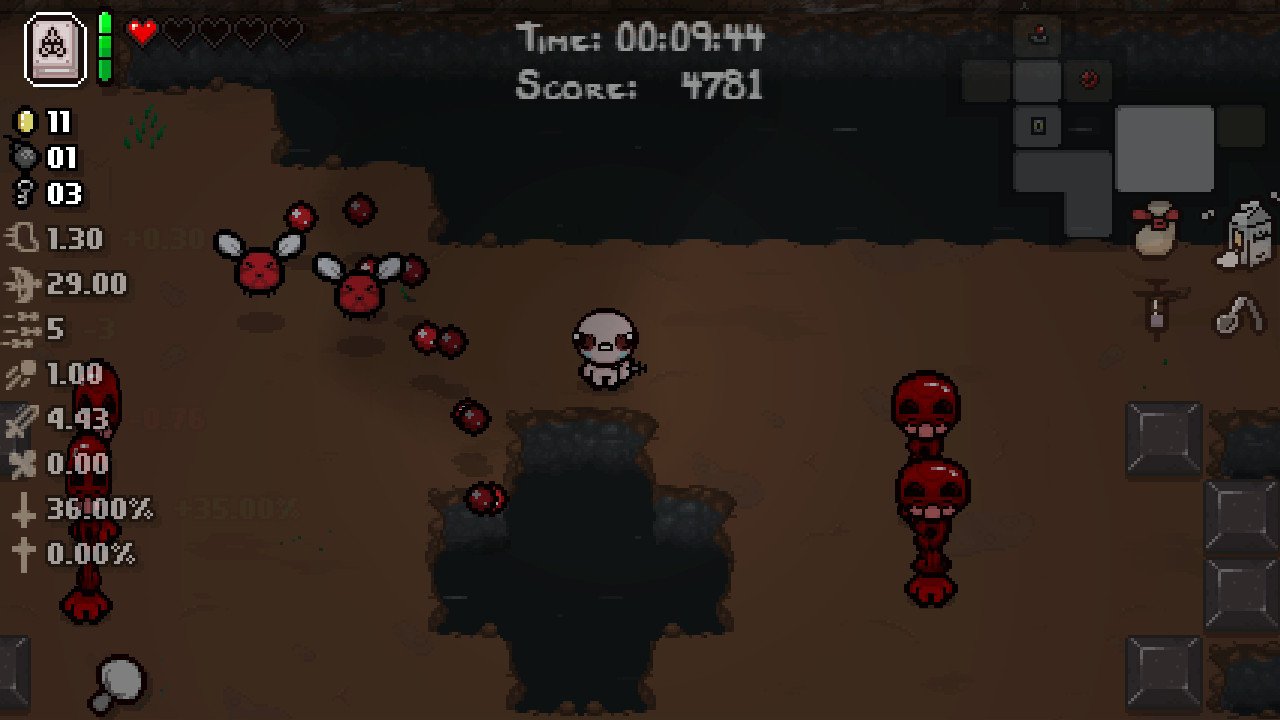 The dungeons are built around procedurally generated levels and using the original Legend of Zelda’s structure having keys, bombs, hearts and coins dropped around various rooms at random, Binding of Isaac takes that idea, but doesn’t require them to progress the game, they just help create structure and additional help. The dungeon has different chapters which consists of sets of different floors. Each chapter contains a different environment along with slight differences in enemies, bosses and difficulties. The basic structure for most floors is a mixture of regular rooms connected together with 1 boss room, 1 secret room, 1 item room and 1 shop among other rooms depending on how deep into the dungeon you are and random chance. 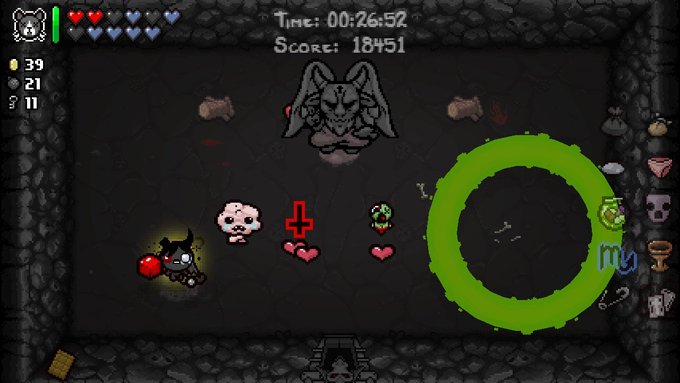 Items are spread out at random, with different item pools depending on what room you’re in and what you have unlocked so far. There are 13 playable characters in total, with Isaac being the only one unlocked at the start and a whopping 600+ items. Due to the high amount of items, the game can occasionally become very difficult. Bordering on a bullet-hell at times even.

The game has a perma-death of course, so if you die on the final hurdle of your current run, you go right back to the start. Learning the deep mechanics to the game, finding out about the many secrets hidden everywhere, memorizing the items and learning which character suits your playstyle best is key to unlocking Isaac’s full story. Along with the story mode (which has a normal and hard difficulty setting), there are challenges, including daily challenges, and a greed mode, which means if you’ve gotten through all the endings, you still have a lot more left to complete and unlock.

Binding of Isaac Afterbirth+’s switch port stays true to the original PC versions. As someone who has played a few hundred hours of both PC games, I find myself always playing this game whenever I get a spare chance while out and about. It is a solid dungeon crawler with gameplay which can last seemingly forever because of the almost-endless world combinations with varieties of enemies, items and secrets.

Binding of Isaac Afterbirth+ gets a 9/10.