Everyone has guilt, but everyone deals with guilt in different ways. Some buried their guilt deep down hoping to forget whereas others make it their mission to free themselves from it. Are you willing to get rid of your guilt? How far would you go to do so? Would you slay gigantic monsters and wear their blood? Well probably not, but The Penitent One is willing to do just that. Blasphemous is about how asking for penance for one’s guilt. This isn’t a simple act of confession for one’s forgiveness. Instead, this is a journey filled with hardships, vile gruesome creatures, and vague messages. Will The Penitent One be free of his guilt or will he be forever cast in it?

Warning: Blasphemous is rated M for gruesome violence, blood, and suggestive themes. This game also uses religion as its main focus point and backdrop. If seeing religion being used in this way bothers you, it may be best to avoid this game. 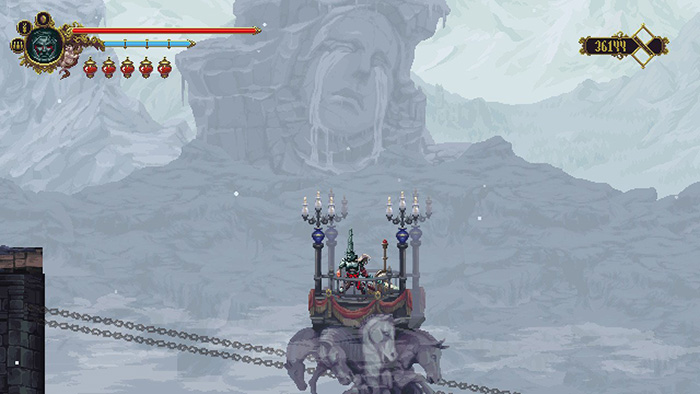 Our adventure takes place in the highly religious and drab world of Cvstodia. You cannot be a functional member of their society without being deeply enrooted in the religion. Because of this stronghold, this leads to one boy praying to The Miracle for damnation for all the guilt. The Miracle agrees and makes the boy the Messiah. Under his rule, the world of Cvstodia is thrown in chaos with beasts roaming around the land. You play as The Penitent One, a silent solitary member of his now-deceased congregation to rid the world of this newfound strain of guilt.

Blasphemous does not straightforwardly tell its story. Instead, the game gives you a general view of the story in the cutscenes. To fully understand the story, players should talk to characters and read every item description the game throws at you. This approach may not be most people’s favorite but it allows the game to have in-depth connections across its world, items, and characters. The game does a great job of selling its morbid demised world on looks alone, but the descriptions take it to the next level. You are doing yourself an injustice if you choose to opt-out of reading.

Blasphemous is an intense, challenging 2D action platformer Metroidvania. The Penitent One only has a sword for his melee attack but can upgrade his moves by spending money at Hea Culpa Shrines. The lunging attack is quite useful at taking out enemies and it should be one of the first moves you buy. You can parry attacks and if you parry at the moment of the clash you can perform a Retribution. Stunning enemies can allow you to perform a horrifying execution. Rosary Beads and relics can improve The Penitent One’s characteristics and how he views the overworld. Sword Hearts are rare powerful upgrades, however, they come with setbacks. The main gameplay loop is looking for openings to attack and then dashing away or countering to defend yourself. This basic loop never evolves or changes throughout the game. 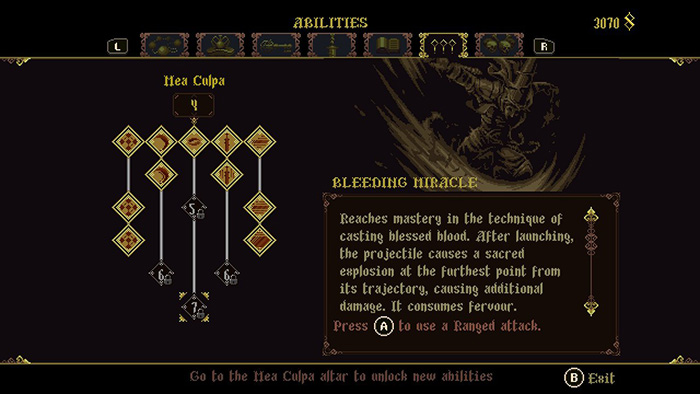 Prayers are the magic system in this game. You can collect various prayers, but can only select one for use at a time. Prayers can range from lightning strikes to protective shields that surround you. You cannot spam prayers as they use up an amount of fervor. Fervor is a magic meter that you earn by attacking and killing enemies. If there are no enemies around, you can hold down A to give up some of your health and money to give yourself fervor. Savepoints can refill your health and fervor as well. The only other way of healing yourself is through biliary flasks. Find and fill up those biliary flasks as often as possible.

Once you die, your guilt spirit will show up on your map. Retrieve your spirit so you can use your fervor meter to the fullest ability. If you choose not to retrieve your guilt spirit, you will lose out on earning a higher percentage of money and your fervor meter fills up at a slower rate. You can also choose to cleanse your guilt by visiting a cleansing statue. Death is a natural part of the game and something you will experience often.

Blasphemous’s strongest suit is its presentation. The game truly shines in its 16-bit glory. The Game Kitchen was able to beautifully create this dark, miserable, eerie world in which you are fully engrossed in. They waste no time bringing the horror. The opening cutscene shows a woman stabs herself to death. This level of horror is kept throughout the game and it never misses a beat. The map is massive and is filled with creepy creatures that haunt your visits. Across areas such as snowy mountain peaks, run-down churches, toxic sewers, and even a library in which enemies throw books at you (Who knew reading can be so deadly?). The backgrounds are breathtaking and the soundtrack perfectly accompanies every single moment. It’s bone-chilling in the best possible ways and will likely stay in your head for a long time. 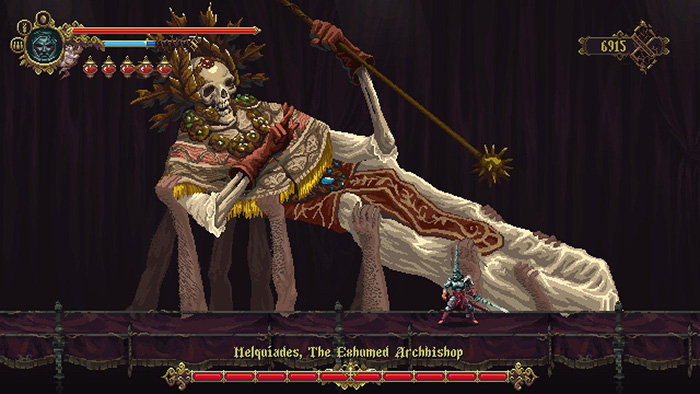 The game isn’t beautiful just in pictures, but the animation adds so much life to the actions. Executions, boss fights, and my favorite animation, healing are some great examples of outstanding animation the game provides. The healing animation shows The Penitent One breaks a flask to rub blood all over his body. Another great example is during the boss fight of Melquiades. His worshipers hold his body so he may attack you. Hands will reach out to attack you but you can see the wiggling of the fingers. Small details like that really add to the experience to make it a fight you won’t forget.

Blasphemous borrows elements from old school games and because of that, it suffers from some of the same mistakes. The difficulty of Blasphemous is not an issue. The problems are everything surrounding it. The layouts of the stages look like they are functional, but it unravels as soon as you start playing. One of the most common ways you are going to die is by misjudging a jump. The platforming sections are just down-right hellish because of this factor. Most of the platforming sections are accompanied by instant one-hit-kill death spikes. This game spreads out its save points in a classic Metroidvania way, which isn’t a problem by itself. Misjudging jumps paired with this system is the issue. This means you will have to retravel back to that spot and hope you don’t die again. It can be an extremely infuriating process since it’s so easy to die at the platforming sections.

Enemy placement can be a real dilemma when they are guarding edges or are right on top of ladders. Dying from the enemy’s attack isn’t the main concern, it’s the knockback of that attack. Most knockbacks can launch you off cliffs and you will fall on spikes leading to instant death. Some enemy patterns can juggle The Penitent One to death. Although the animations for healing and using prayers are divine, they take so long to process you are most likely going to end up in worse shape than if you didn’t use them. Lastly, the game features a fast travel system, but most of the time it isn’t that fast since you have to go through screens full of enemies.

When I wasn’t dying by one-kill-hit death spikes, I was met with wonderful glitches. Some of the common glitches I had to endure were going through platforms, hits not registering, freezing between loading screens, becoming stuck on a wall, and guilt respawns landing in the deadly one-kill hit spikes. By far the worse glitch I experienced was in the Tres Angustias boss fight. I completed the boss fight, but the game failed to properly load the next phase of the boss. This leads the game loading the next phase of the boss despite me killing it. The win and death splash screen simultaneously appeared after the fight. For some reason, the death took priority over the win. Having to repeat the entire boss fight without it glitching was very nerve-wracking. Glitches happen all the time in games, but ones such as big as this is unacceptable.

Blasphemous can be as long or as short of an adventure as you want it to be. The game has various collectibles in the form of rosary beads and knots, relics, prayers, body parts, and the trapped Children of Moonlight. These collectibles are entirely optional, but to get the full experience out of the game it’s in your best interest to seek these out. Sidequests are also available and can add great length to the game. Since it’s a Metroidvania, players will have to revisit and unlock secret areas after they gain new abilities from relics. Full completion will take around 20 hours for your average player. The game consists of two diverse endings. Neither end is an outright clear good or bad ending, it depends on your outlook on the story. 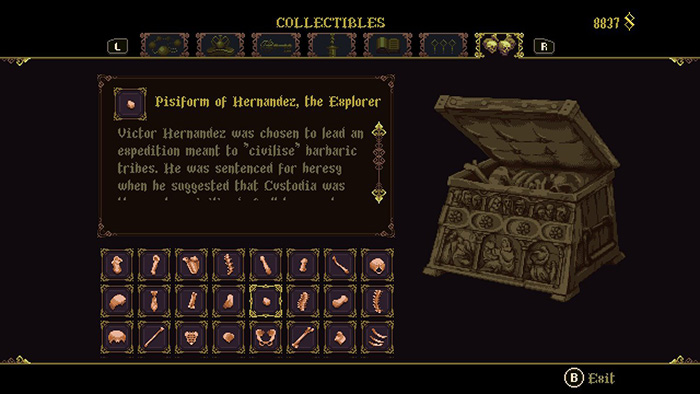 Plagued with glitches and questionable design choices, Blasphemous misses its target of being an excellent game. It often feels that the game is fighting against you rather than putting up difficult challenges. Despite this, Blasphemous excels at creating an interesting world and atmosphere that will stick with players for a long time. Even with its issues, the game at its core is good, there’s just a lot you have to tolerate. At its current form, masochists will enjoy the game warts and all, but for others, you might be better off waiting for some of the bugs to be ironed out.