BlazBlue: Clonephantasma isn’t the first spinoff the BlazBlue series has seen. The DSiWare service had Blayzbloo, which featured chibi versions of the series’ BlazBlue main characters. BlazBlue: Clonephantasma is closer to Blayzbloo than to the main series, because it also has chibi versions of the BlazBlue cast – ten of them. Instead of the canon games’ serious and at times downright dark storyline, BlazBlue: Clonephantasma uses a simple and decidedly silly plot for you to use as an excuse to take on the waves of enemies the game features. The main characters see clones with malicious intent towards their friends and have to whack them all to find out who’s behind the whole guacamole.

The game replaces the one-on-one fights of the canon series with seven 3D stages in which you take down hordes of enemies and the ocassional boss. These enemies have no health bar, and neither do you; you defeat enemies by hitting them until they fall or go flying off the stage, and if the same happens to you then you lose a life, of which you have three in Story Mode and only one in Challenge Mode. The game’s simple controls are easy to grasp and work well – A button for regular attacks, X for Drive attacks, Y for Blast Drives, and B for jumping. Blast Drives are special attacks that affect all enemies surrounding you, but they fill up your level gauge: for once in a video game, this is undesirable as using Blast Drives or getting hit by powerful attacks with the gauge full temporarily stuns your character. Bosses are taken down the same way as enemies, except that they, like you have three lives. The stages are mostly quite small, and the stage-based gameplay makes them feel even more constricted. While it doesn’t mar the gameplay too much, it would have been more fun if the game had a little more open-adventure kind of gameplay with checkpoints. Also, sometimes there are errors in the ‘hardness’ of objects, so your character might sometimes take a fall and then walk on air for a small distance. 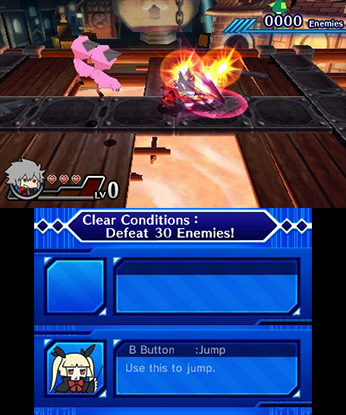 Apart from the Story Mode, there’s a Challenge Mode in which you keep going for as long as you can, taking down as many enemies as you can, and if you fall off the stage even once it’s game over. The stories of each character take only about 20 minutes at most to beat, so Challenge Mode is a welcome and sensible addition to the game and increases the replay value sevenfold. There are also Awards such as Medals (achievements) that you get by fulfilling certain conditions while playing and illustrations of characters that you unlock by beating their respective story modes.

The graphics are, thanks to the chibi art style, cute and good to look at, and the fact that there’s not a great amount of detail on the character models exacerbates the cuteness of their facial expressions and such instead of dragging the visuals down. The stages are rather plain, but get the job done. The voice acting is so hilarious that it’s clearly done that way on purpose, to increase the silliness factor of the game. The music is simple and pretty forgettable, but not bad either.

I could write a whole essay on how BlazBlue: Clonephantasma could be improved, but with the silliness-laden enjoyment it provides its issues don’t matter that much. If there was some kind of multiplayer, whether co-op or versus, the game would have been dozens of times more fun, but that may be a little too much to demand of an eShop game (despite Cube Tactics having online multiplayer, so it’s not impossible). Despite its many imperfections, the game is always fun and, not having the dark tone of the canon game, is great for BlazBlue fans and the little ones alike.