THE WORLD FOR ONE AND BOMBS FOR EVERYONE! 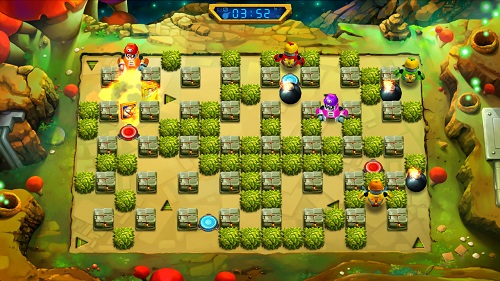 GAMEPLAY:
Bombing Bastards is an action arcade game based around maze levels and yes, it’s like Bomberman. Still, Bombing Bastards is a polished game that feels somewhat different from the original concept and tries to make it larger. The story is quite simple: the evil Dr. Wallow created you, a robot capable of dropping bombs, with the mission of defeating every critter allowing him to rule the universe.

In simple terms, you need to drop bombs through the levels with the intention to defeat every enemy on the screen. To succeed, you need to destroy the soft walls that are in your way to be able not just to collect power-ups but also to reach the enemies themselves. You can only move horizontally or vertically, as well as your enemies, therefore you should be careful not to be reached by enemies but also by your bombs.

You can find different power-ups that will affect you, for example, increasing/decreasing the range and quantity of bombs or even the speed of the player. In addition, you can also get upgrades such as being able to activate the bombs remotely, throw or kick them.

There is also a nice variation of enemies where some of them will try to evade your bombs by hiding, while others will try to attack you and the bombs you make, and of course, all of them will try to kill you. The levels will also feature different obstacles, such as teleporters, black holes and breakable floors,  depending on the world that you’re playing.

There are two main modes that can be played: 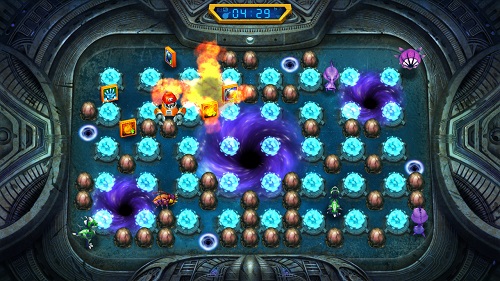 Adventure: This single-player mode features the story of the game, five worlds with six levels each, being the sixth one the boss level. Every level presents a difference challenge with different enemies and obstacles. Still, the environment is generated randomly making a little difference each time you play the level.

There’s also a time limit to complete a level, being five minutes, where the faster you beat the level the more stars you will get after clearing it. The game features a high difficulty which is more noticeable in the bosses, being a big challenge for casual players.

Battle: This is the multiplayer mode of the game where you can play with up  to five players. The mode itself supports a total of eight characters, being able to battle with the CPU. The game supports a good variety of controls, and you’re able to choose any world without being required to unlock it and how many rounds or wins are needed to end the game.

Playing with friends results in a more enjoyable experience than playing with the CPU, featuring a moderate difficulty but it’s still a good detail from the developers that will add some replay value to the game. 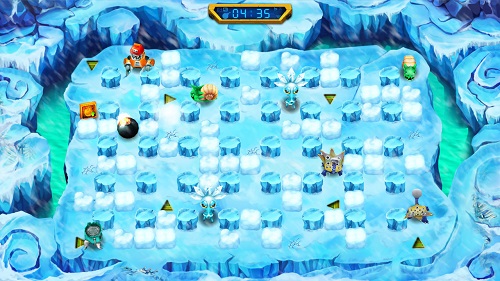 The soundtrack features seven remixed songs of classical music, being five of those for each world, one for the level selection and one for the title menu, doing a good job in it. Still, the songs feels really short and the song selection is generic. The sound effects of the game are well done and the voice acting is excellent.

PRESENTATION:
The presentation of the game is well done, featuring an easy interface, a lot of options, a good quantity of levels, a great quantity of replay value, a nice still short manual and a great tutorial.

Sadly, while this game begs for online play, the main lacking feature of the game is the Off-TV, where you can see the game in the Gamepad but there is no audio output.

CONCLUSION:
Bombing Bastards is a good game that offers a fun experience, featuring a nice quantity of levels and a fun multiplayer mode. It’s sad that there is a lack of sound output in the Gamepad and the missed opportunity of an online mode, however, it’s still worth the price.