WHO NEEDS A RETRO CONSOLE TO FEEL THE SAME AGAIN? 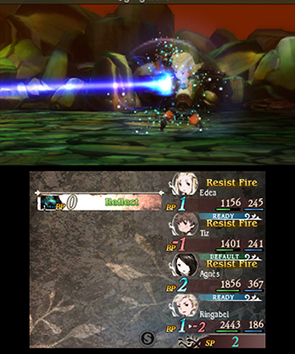 STORY:
The story takes place in Luxendarc- the land of the light and shadows. One day, one of the crystals were surrounded by darkness which started a new destiny for the new four guardians of light. I will stop here because I don’t want to spoil it anymore for those interested.

GAMEPLAY:
The game itself is a JTBRPG (Japanese Turn-Based Role Playing Game). This genre is well-know for Nintendo users. Two infamous examples are Mario & Luigi Dream Team and Pokémon X/Y.

The game system is quite simple. It is based on pure strategy. It is quite complex to explain but I’ll do so briefly -:

You have a world to explore, following a story or side quests. As you walk, you can find random encounters. Being in towns will help you to buy items and sleep which allows the player to fully recover. There’s also an adventurer; this is a guy who can help you to save in places you can’t i.e. towns and dungeons. It will also sell you the items you’ve unlocked in the Norende minigame (explained below).

‘Attack’ means just that, you attack the enemy. The total of hits and quantity of damage depends on your job and weapons used. Some jobs are better for attacks and some jobs are better for using abilities. The abilities are limited to the jobs you’ve selected. In this case, you can only combine two abilities at the same time and therefore, you will need to think of the best strategy possible. There are a total of 24 jobs to select from. Skills for the other side include most of them being independent of the ability you’re using.

The option ‘brave’ will allow you to take up to four turns (4 BP) which also means you need to wait four turns later. The default mode is like using defense, but it will also add one BP for future use. This is quite a twist for the formula. 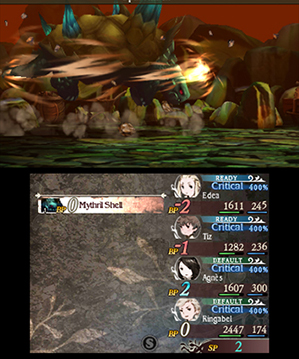 The ‘special’ can be a strong attack. These damages depend on the weapon, job and customization you use, or a support special, where you can heal or recover your team. Every weapon type has a condition for unlocking the special and full customization is allowed.

The weapons and equipment available in the game are limited if we compare it to other games. However, it has a greater variety of options to choose from. There are also some special clothes you can unlock, most of them being special DLC in Japan.

Another option in the game is within the random battles: you can pick at anytime the frequency (a lot if you want to train or nothing if you’re in problems and I think something like this should be included in every game.) Secondly, you can also change the difficulty anytime as well.

There are  also some connectivity functions that can be done with StreetPass, or with friends who have the game. In first place, we have a side quest mini-game where we need to restore Norende and with it, we have access to buy powerful weapons and better items. You can also fight special monsters and win experience without the risk of a ‘game over.’

Every person will become a villager later which means you can use them to do construction. It will take time but the clock runs when you’re playing the game or just putting the console to sleep. For example, just one guy restoring one play can take up to 99 hours. Sounds like a lot right? Well, 2 persons mean 45 hours, 3 persons equate to 30 hours, hence the more people you put to work, the less time you have to wait. 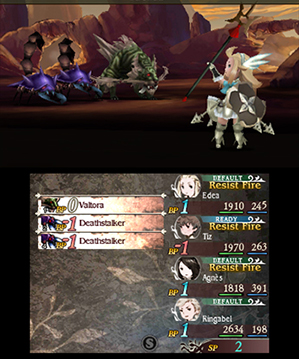 The friend summoning allows you to invoke a friend who can unleash any type of action he sent and you can also send your own character for summoning. Doing this during a Bravely Default will allow you to send high quantity damages over the 9999 limit. The friend link function allows you to have all the jobs and levels your friend obtained which allows his hard work available to you too.

The DLC is optional and the first use is cheaper. A drink will restore 3 SP, and if you want it at no cost, you need to wait one entire day in stand-by mode. (Bad move Square-Enix)

The controls of the game work excellent. They are quite usual in this genre, but sadly you can’t use your Circle Pad for the menu which means that you need to use the control pad only. The good news is that you will easily get used to doing so eventually.

Lastly, because this basic explanation is getting quite long, here’s a brief display of the story. The story is really interesting for the first four players and the game presents an alternate ending as well. If you beat both endings, you will earn a surprise.

After beating Chapter 4, you will have the chance to get the normal ending. Getting this ending at this point is a bad option because you will receive quite the spoiler. If you’ve finished Chapter 8, you have access to the true ending. Something good about the game is if you finish one ending, you can start the last chapter again which allows you to enjoy both endings without playing the whole game again.

However, you will literally be playing the same game four times because the main elements you did from chapters 1 to 4 will be repeated in chapters 5, 6, 7 and 8. It’s lame but at least, in completing side quests, you will know different aspects of the game which makes the option priceless to beat all the bosses again four times.

GRAPHICS AND SOUND:
This is a game that has a great design and the hand-drawing backgrounds are of great quality. Ultimately, the game in general looks great and the AR Cards animation looks even better with realistic models.

Sadly, the game doesn’t look too striking in the 3DS XL because some parts get pix elated.

There are also a few CGI cut-scenes with the bigger one being at the introduction of the game and looking really appealing. However, a little better video compression would have been better though.

The soundtrack for the game is great, maybe a little repetitive, but still one of the best OST available for a 3DS game.

The game is almost fully voice-activated in English and the dubbing is amazingly done. You can also listen to the game in Japanese if you didn’t like the western cast. The sound quality is superb and the amount of voice casting is amazing. Additionally, for some reason the game is over 3GB of data.

PRESENTATION:
The presentation of the game is fantastic. It also adds tutorial quests while you’re playing. There’s everything you can need.

Additional features that would also make a better experience include the fast-forward function which is done so you can save a lot of time. The D’s Journal will also help as it elucidates information about objects, abilities, enemies, location and more. It also has an explanation of the story from the other side.

The English translation is excellent but in my case when I tried the Spanish translation,  sadly, I saw that it entails the “Square” quality from old games like Final Fantasy VII and VIII. After playing for a while, I finished playing it in English.

The StreetPass functions are remarkably done. With the chance to complete the village, link or summon another player and playing with your friends are undoubtedly benefits offered by the game as not everyone has the good luck to find someone with a 3DS.

Conclusion:
This is a great game and a classic JPRG. It’s a start to a saga for a type of game we wanted back in the day and now, it’s here in a redefined and improved version. We have the option now and it’s amazing. Meanwhile the story isn’t the best, the game will be desirous to play.