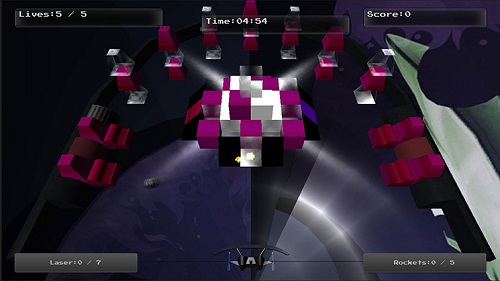 GAMEPLAY:
BrickBlast U!, or BBU!, promises a new and innovative way to play Pong, but it’s actually more a 3D brick breaker game than a Pong game.

Your objective is to destroy every block brick on the screen, in the required time, to unlock the next level, presenting a total of 14 levels available in the game.

Other power-ups are the Fireball, that allows you to do double the amount of damage, weapons like Rockets and Lasers that you can use to destroy blocks and the classic Multiball, that adds three extra balls helping you destroy more stuff. There is one more, the Nuke, that affects every block doing one hit of huge damage.

While the idea is good (and being honest I love this type of game), the game is actually broken. There are a lot of bugs that don’t allow one to enjoy the game, and I will list some examples:

Most of these bugs are hard to ignore, making me wonder how these bugs weren’t fixed while testing the game, or why Nintendo allowed a broken game to be released.

The controls aren’t convenient either, because while you play with the buttons, you need to use the tactile screen to use the menus and also start the levels. I wouldn’t care about this, but there is no audio output in the GamePad (making the player watch the TV screen), forcing you to watch the GamePad every time you want to pause or start a level.

The last thing to add is that the game is too slow paced, meaning the experience not only doesn’t work properly, it’s also boring. And with that, almost every time you use the Nuke power-up, the game will lag, showing how badly optimized the game is. 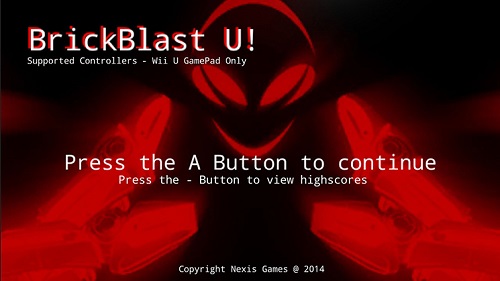 The presentation of the menus is pretty bad overall, the images used for the game suffers from ugly compression, and being honest, the 3D models are a little basic.

The first level uses an image that is cut in the half, I don’t know if that’s what the developer wanted but still, it doesn’t look good.

The last promise of the game is the best electronic music you have ever heard, and sadly it fails in this department too; still, it is the best part of the game. The music is catchy but most of the songs are generic, and the sound effects are limited. On the other hand, the voices of the game are well done and those are actually good.

PRESENTATION:
Well, I don’t want to repeat the game’s flaws again, but there are still things I can criticize about it, but I will skip those small details. The game features a high-score board and features three different profiles, offering some replay value and there’s a basic manual too.

CONCLUSION:
Right now I can’t recommend this game; it’s broken and the presentation is mediocre. There is no GamePad audio output. The music is well done and it’s a good idea, but it still needs a lot of work. I will be sure to make a new review once it’s updated.

The developer confirmed that an update is in the works, fixing bugs and the GamePad audio output. Once it’s released, a new review for the game will be available.