Pastries have been too sweet for too long. Cake Bash, from the creative folks over at High Tea Frog and Coatsink, challenges players to become the sweetest dessert in the bakery by ‘bashing’ the cherry on top off of the competition. Does this cake reign supreme? Or is the soufflé a little flat? Put on your chef hat and let us dive into this batter. 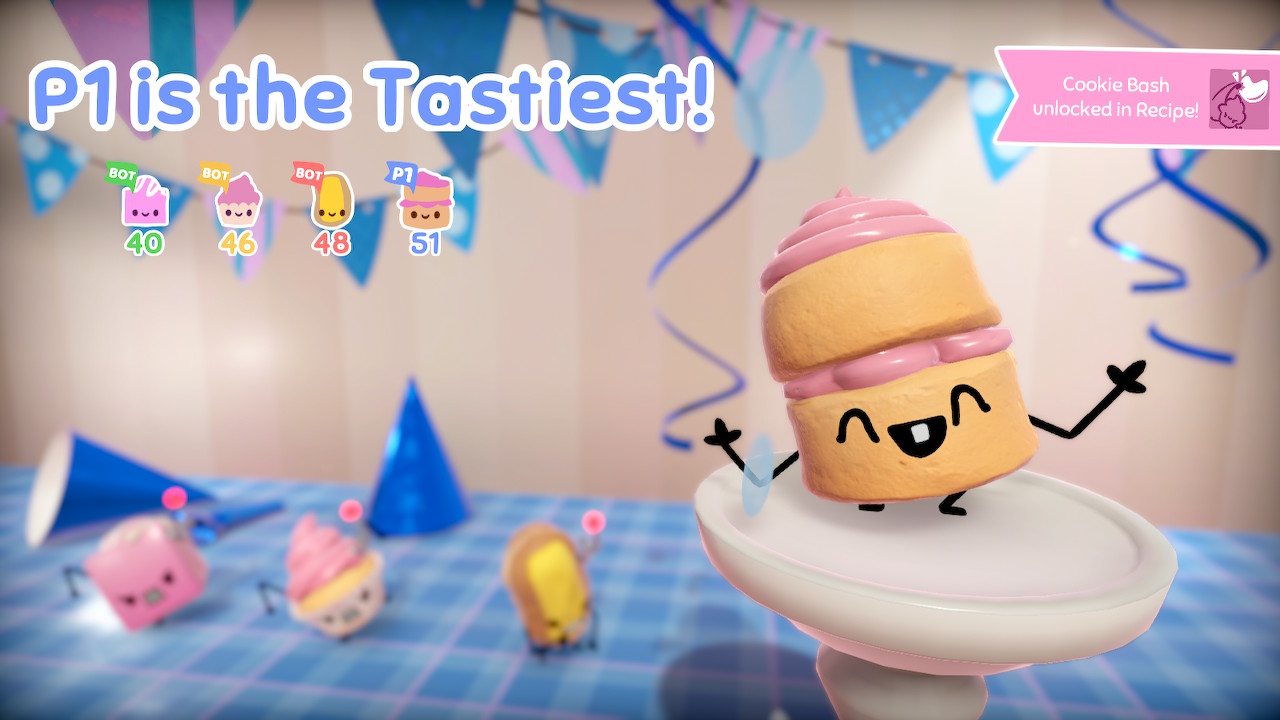 Players start as humble, topping-less cakes in a showcase. They are told that to become the sweetest cake in the bakery, they must duke it out in arena-style mini-games. The story is loose, giving just immersion to motivate players to beat up on their fellow flan. The story’s focus on competition helps cement it as a party game, with multiplayer central to all aspects. Even the story mode is playable by multiple people, though single player is still an option. A bit of the experience is lost playing alone, as the structure of the story itself revolves around sweet, sweet competition.

Cake Bash is all about its variety of mini-games. Up to four players are made to duke it out in a series of fast-paced challenges. Each mini-game has a hilarious title, aptly describing the goal of each game. Despite appearances, the game can be challenging, making it hard to rise to the top of the cake tier. For instance, the mini-game Fork Knife challenges players to dodge silverware in a battle-royale setting. Forks and knives fly into the arena, with the last pastry standing taking the cake. Each mini-game is short and sweet, making it an easy pick-up-and-play title for any party. The design of the mini-games makes them instantly charming. There is a limit on how many rounds can be played before the charm wears off, but it works well as an addition to any party game rotation. 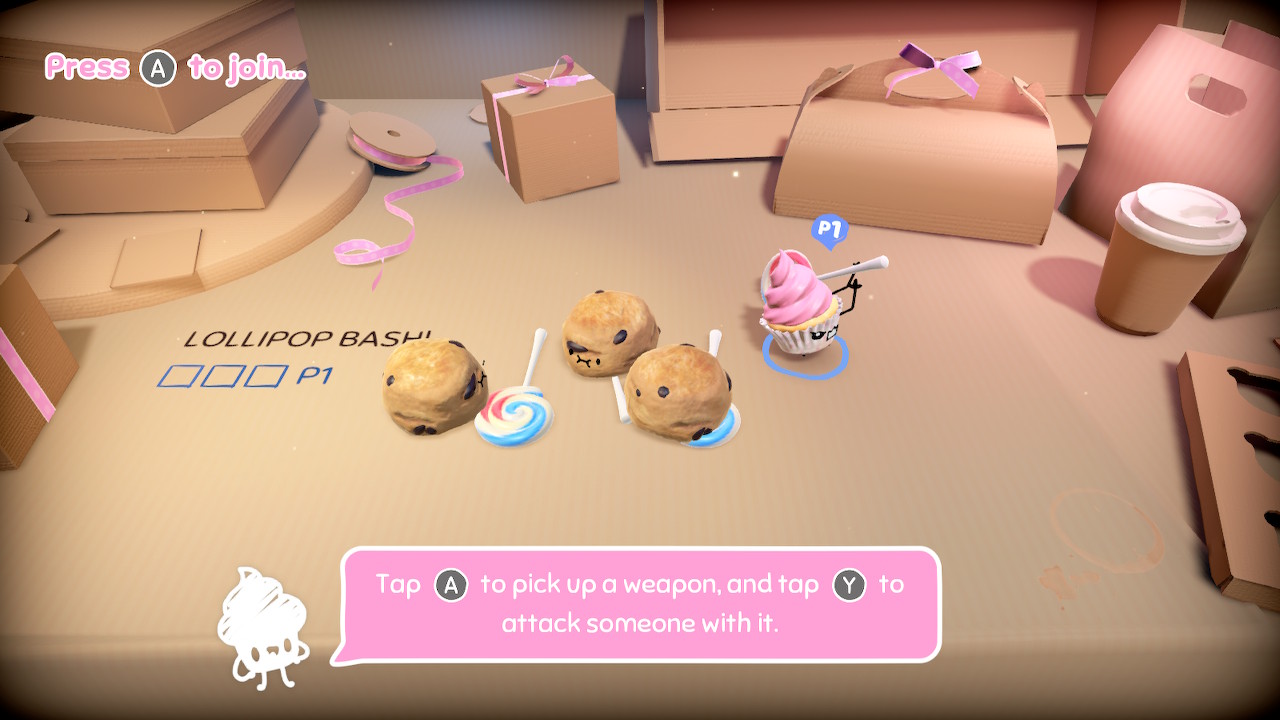 After every course in the main story, players are served up an opportunity to customize their sweet treat and add toppings to their chosen pastry. The most toppings at the end will end up being the sweetest cake! This is the main objective, get out of the group showcase, and into the solo one in the bakery. Players who win rounds have the opportunity to buy more sweets. The toppings added remain with the player throughout the cake campaign, allowing for some incredibly creative looks. There’s also a lottery system here where players can spend less but there’s a chance that a gross topping like moody broccoli will be added. This system leads to a little randomness in the game results, guaranteeing a unique playthrough each time you boot it up. In addition to the added customization, here is a good variety of base bakery items to choose from; players don’t have to be a piece of cake, they can be a donut too. 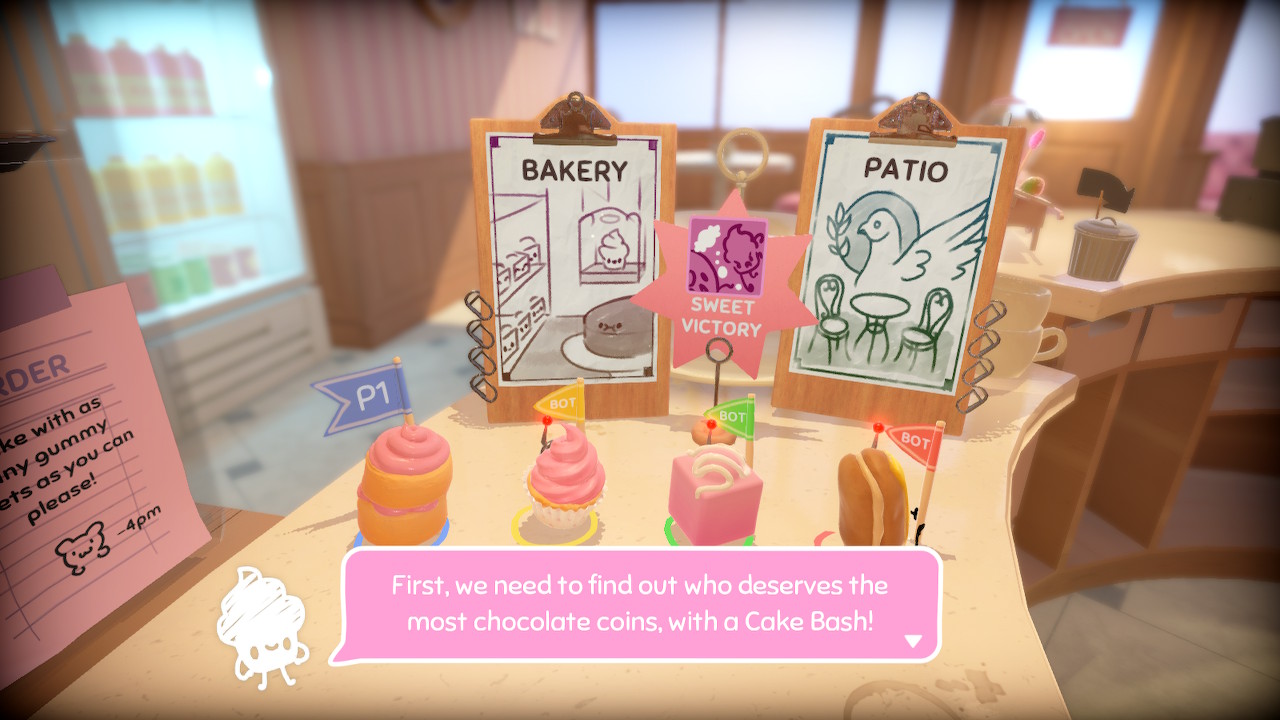 While single player is fun, multiplayer is inevitably where Cake Bash shines. With both local and online play, your friends don’t need to be in the same room to enjoy a few rounds. The game’s lighthearted style does nothing to prevent intense competition between players. The inherent randomness of some gameplay aspects, such as the toppings players can choose to buy at the ends of rounds and the bonuses they bring, only adds to that fact. The biggest downside to multiplayer is the lack of cross-platform support, meaning that if you want to play online with your squad, they all need the Nintendo Switch version of Cake Bash. This also limits the random lobbies available, leading to occasionally long wait times. Overall, the multiplayer is focused on in-person sessions, performing very well in this setting.

Players move their cake with the control stick to complete the various mini-game objectives with a simple moveset – attack, dash, move, and throw. Each mini-game has a different focus, such as bashing the cakes of other players or dodging fast-moving projectiles, but the basic controls stay the same. The game provides you with an optional tutorial at the start to get comfortable with the controls, but simply playing a few matches with friends can accomplish similar proficiency. 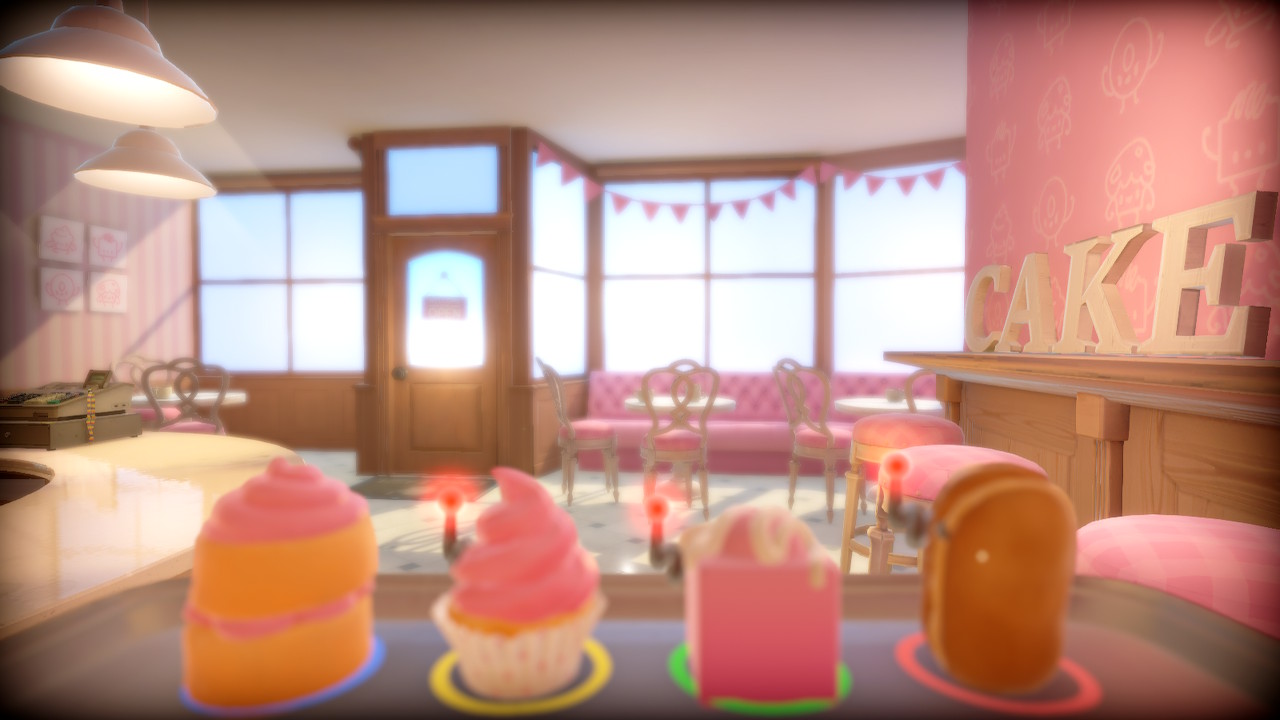 The cartoony style lends itself well to the identity of this party game. The bright colors and delicious character design fit perfectly within the glistening bakery backgrounds. The in-game animations are kept relatively simple and run quite nicely on the Switch, making it quite easy to keep track of what’s happening on screen. Overall, the game is quite charming, filled to the brim with its unique personality.

For those who frequently play party games, Cake Bash is a title you can consistently bring out. The various mini-games provide enough variety, and the game’s inherent randomness makes each match its own unique experience. Repeated rounds can easily spark competitions, turning even the closest of friends into foes. However, for the solo player, the game is forgettable, with single player becoming no more than a training ground after the first run-through. Without the charm of multiplayer, there’s no compelling reason to revisit the game. 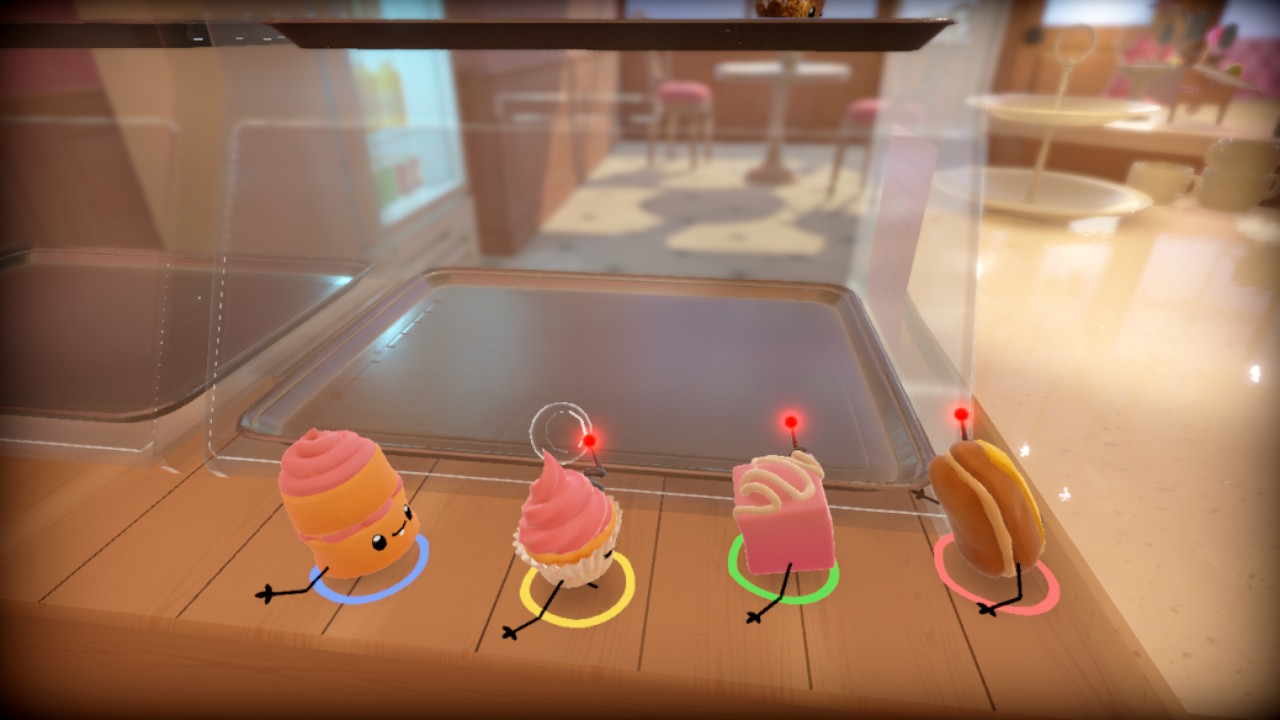 The creativity and charm are easily enough to recommend Cake Bash to any player looking for a new party game to add to their Switch library. The mini-games are memorable and can be played repeatedly with friends and even strangers online. The game certainly has the potential to be the highlight of your next party.