Call of Duty: Ghosts offers a refreshing take on what most think has become an annual money-grab and delivers one of the best first-person-shooter experiences I’ve played in quite a while.

Story-wise, Ghosts is nothing special. Everything Activision, Infinity Ward and even Treyarch work so hard to bring you is Call of Duty’s ever-so famous multiplayer modes, however it is nice that they even decide to incorporate a campaign in there, even if it doesn’t have a memorable story like other games of it’s time.

If you’ve ever played a Call of Duty game before, you likely purchase them for one thing and one thing only: Multiplayer. Ghosts actually features three online modes, the first of which being traditional player vs. player death-match, the second being Extinction, an online co-op alien survival mode (which can also be played alone) and Squads, which will be detailed more in a bit. 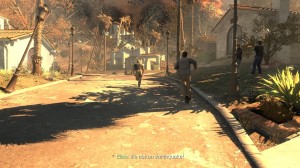 Multiplayer is honestly quite different this time around; instead of grinding out levels to unlock your favorite weapon or perk (although leveling up is very much part of the game), you’re left with Squad Points to purchase whatever would normally take you hours to unlock. Squad Points can be earned by completing operations in-game, such as “Stun 50 enemies with a concussion grenade” or, “Kill an enemy Guard Dog while it’s in mid-air” (yes, you can shoot dogs in this game.)

Honestly, although Squad Points may be a delight for some, I personally don’t like them. There’s something special about grinding levels with your friend on the weekend just to unlock a certain weapon, but with the inclusion of Squad Points this time around, it allows anyone at any time to have whatever they want. Keep in mind you aren’t forced to use Squad Points to purchase equipment, however you’d be at a big disadvantage if you didn’t. 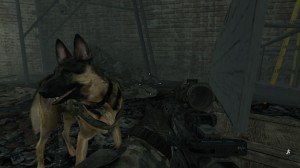 Perks are extremely broken down this time around, with the game totaling 35 perks overall, as opposed to the games ancestor, Black Ops II, which featured a measly 16 perks in all. This is a much appreciated change, as it adds for a very diverse customization experience.

Another one of Ghosts’ new additions is character customization. You can unlock new suits and helmets by completing challenges and can even play as a girl for the first time in Call of Duty history. Although it’s certainly a welcome option, there are some character skins that do affect how well you can see your opponent, which is extremely annoying for anyone that doesn’t want to go for the massive challenges it takes to unlock one of them (I’m looking at you, Ghillie Suit).

I promise I’m almost done talking about Multiplayer, don’t worry. I’d just like to add that the support from Activision for this game on Wii U is down right horrible. I’m not one to complain about the lack of DLC, but there are so many bugs and glitches that need to be fixed immediately (and at the time of writing, they haven’t been). 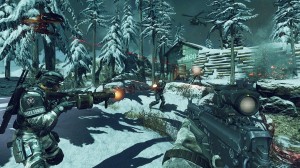 Okay, Extinction. You can play the mode locally by yourself or play it online with your friends, and I’d definitely suggest doing the latter. Extinction is similar to that of Zombies from Black Ops II, however this time around instead of fighting to stay alive for as long as possible, you have to get from point A to point B, and you’re fighting aliens instead of zombies.

Squads. Err…yeah, I haven’t played much of Squads. Basically it’s you and nine other CPU’s fighting someone else online and their nine CPU’s. It could be argued that this is just another form of traditional Multiplayer, seeing as all of the maps in Squads are actually just Multiplayer maps, but Infinity Ward gave it it’s own menu selection (for whatever reason).

It’s also worth mentioning that the online community across all three modes is dreadful, resulting in you playing a mode you didn’t really want to play. This isn’t a fault on the game itself, but rather a problem that only Nintendo can solve by selling more systems.

Call of Duty: Ghosts shows that despite being the tenth installment in the franchise, it can still being new ideas and refreshing gameplay elements to the table. With a story that isn’t quite what it could be and developer support that’s awful, Ghosts manages to shine within it’s pristine Multiplayer and Extinction modes.