Who ever imagined Princess Peach’s little assistant getting his own game? The Mario series took a risk by varying the franchise with games from different characters, such as this one, but did it suffice? Captain Toad is a puzzle game in which the players must rotate and maneuver the titular character through a wide variety of obstacles, puzzles and enemies using the Wii U gamepad in various environments.

The game begins with a colorful introductory level, where the player must travel to the top to get the star by following Toadette. As you collect the star, Toad and Toadette skip around the star in happiness like they have completed their adventure. Little do they know that a giant blue bird with massive eyelashes is there to steal their glory. The intro manages to captivate the audience without either of the Toads saying a word. Anyways, this is a fairly simple level and the purpose is to get the player familiar with the controls and how the game generally works.

The game is controlled entirely using the Wii U gamepad and touchscreen. One problem that I had while playing this game was the gyro sensor. There’s no way to turn it off, and I prefer to manually move the camera, so I fixed the problem by holding the gamepad still in one position while playing it. It’s not a major problem, but I feel like they could’ve added an option to disable the gyro sensor for people who prefer that. Other controls, however, I feel are the best they could have done. The ability to tap objects, move the camera and interact with the environment is great because it makes you feel like you’re not limited in your exploration. 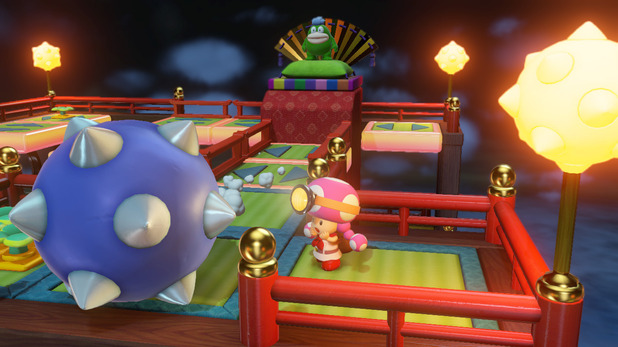 As you progress through the game, the levels increase in difficulty. The included levels are insanely varied and do not seem recycled at all, which is a big plus. In one level I was navigating through a forest to find a star, whereas in another I’m rotating the ground to line up platforms to climb. From sleeping toads to enemies that look like they’re dancing, the levels are highly detailed. To complete a level, the player must collect the star. This is essentially a simple task, but the real game is uncovered when the player tries to find the 3 gems within the level. The three gems are hidden well with each level, and it’s oh-so-satisfying finally figuring out how to find a certain gem after struggling. There are also different recyclable items within levels such as radishes and keys. Don’t worry, I won’t spoil it for you.

The graphics suit this game perfectly and the vivid colors compliment the overall whimsical theme of this game. The models are gorgeous yet simple, and are of course rendered in high definition due the the Wii U’s fabulous hardware. Enemies look like they’re dancing and everything graphics-wise in this game looks really well done. There’s really not much more to say, Nintendo nailed it in this department once again.

Music in this game is pretty much your typical Mario music, although I found it to be more relaxing in a sense. I personally loved the music in this game and it wasn’t bothersome or jarring within levels. You know the music is bad when you ask what yourself what you’re listening to, and here is not the case. The music blends in with the levels just right and although not amazing to all people, is a great choice they made as well. This game’s replay value is moderately high. There are gems to collect and bonus objectives to be cleared, but not so much that you can play them forever and not get bored. So, one may ask, is this game fun? Although opinions differ from people to people, I would definitely say this game is fun. It has this unique vibrance to it that no other puzzle game I’ve played so far has had. It’s a new type of platformer derived from the mini-levels in Super Mario 3D World. From the little radishes thrown at the enemies to the adorable boss fights, this game did not disappoint, and it was a great addition to the Wii U system.