Fishing games are fun. Not all of them, specially not the ones on home consoles but fishing games on a handheld console are more enjoyable and kill a lot of your time. Today we’re going to review the Carps and Dragons game for Nintendo 3DS. Don’t let the name fool you, it’s not a dragon slaying game or anything. Instead, it’s a fun and addictive fishing game.

The game offers three modes of play. These game modes are Arcade, Challenge, and Fishtris. Arcade mode is as simple as it can get, all you have to do is catch as many fish as you can before the time runs out. Challenge mode is a bit challenging (no pun intended), in this mode you’re presented with different objectives like catch only blue colored fish, if you catch any other color you’ll fail the challenge,these challenges get trickier and difficult as you keep moving ahead.

The final mode, Fishtris, is the trickiest of them all. It’s a bit similar to the arcade mode as you have to catch the fish before time runs out but there’s an on screen meter where all your catches will land. Therefore, if you fill the meter you’ll lose, so try to catch multiple fish of the same color to make the fish vanish. Just don’t let the meter fill up completely. 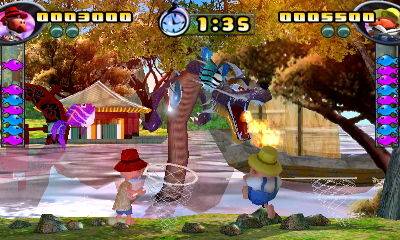 The controls are much simple. The D-pad or circle pad can be used to move your character, X or B buttons will let it jump, while the Y or A button will swing the net to score some fish.

The graphics aren’t spectacular. It’s just what you’d expect from a small budget game. 3D mode makes the fish pop-out a bit but doesn’t dazzle you in any way. The same can be said about the music. Nothing special in that department either.

Verdict: Carps and Dragons, fishing for the fun!

Carps and Dragons is a great game but the gameplay can get a bit repetitive after a while. Don’t worry it will still take away a lot of your time before it actually gets boring. Apart from that it’s a fun and addictive game for that price tag. You can download Carps and Dragons via eShop for $4.99