CIRCLE Entertainment has no qualms telling you straight-out that Castle Conqueror EX is a remake of the DSiWare original. A real-time strategy game suitable for casual gamers, it features you playing as one of four commanders defending your country against an invading Empire.

The game is entirely controlled by the stylus – battles are fought on the touch screen, with you dragging your stylus from your castle to other neutral or hostile castle to send out a maximum of five infantry units to attack them. If soldiers of enemy castles meet your soldiers along the way, they engage in combat. The battles are usually very short, with some easier ones lasting less than a minute. Once you conquer a castle, you can send troops out from that one two. The upper screen shows your status, including your commander’s SP (which is required for using special cards that have temporary boosting effects). Battles are won when all enemy castles are conquered. After battles, you earn gold, which you can use between battles to upgrade equipment and buy items. Each commander has three unique skills, so you can choose which one suits you the most at the start of the game. One character is unlockable to give you incentive to replay the game.

The gameplay is fine technically, but the difficulty is pretty imbalanced – some levels were laughably easy and others seemed almost unbeatably hard. It doesn’t ramp up progressively; imagine a steep saw-tooth visualization for the difficulty instead. 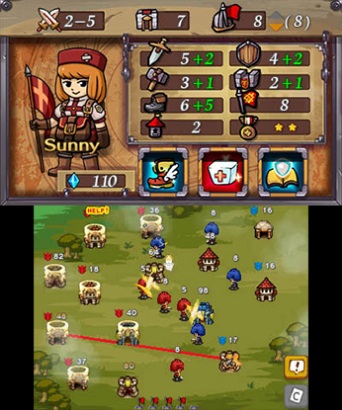 The art style, like other CIRCLE games, has an anime influence – although less so compared to most of their releases. The visuals are bright and colourful and the tiny sprites were charming, even if they were recycled a lot.

The music was great in terms of how it blends with the game’s setting and character, but it was put together rather roughly, and in the title screen especially you can actually hear the short loop of music ending and beginning over and over again. The sound effects were few, with the attack sound effect playing for the majority of the game (there was an option to turn it off for those who found it annoying) but the lack of sound effects fits in with the bite-sized feel of the game.

Presentation-wise, Castle Conqueror EX is very pleasing. The menus are full of character and maintain a simplicity that makes them easy to navigate. In battle, the card menu is conveniently placed – for right-handed players at the least – to make using cards less of a hindrance in the flow of the gameplay.

Castle Conqueror EX promises to be enjoyable for casual gamers, and in its presentation it definitely delivers. The jitterbug  difficulty, though, leaves it in no-man’s-land between casual and hardcore gamers. Buy it if you are looking for a game that can be played in very quick bursts, but it’s not for you if you want a game that gives a steady challenge.