If you were a kid in the early 2000s, then you most likely spent a lot of your free time on Newgrounds’ website. Back in the day, this was the Youtube of the time. Anybody and everyone were on it, either by making short clips, small flash games or just simply watching/playing the content. One of the breakout hit games was Alien Hominid. The beloved Alien Hominid got so popular it was able to get a retail release. This lead to The Behemoth being formed. The Behemoth went on to make great games such as BattleBlock Theater, Pit People, and of course Castle Crashers. When Castle Crashers first came out, it took the world by storm. This small affordable indie game latched onto the hearts of the people. Would Castle Crashers have the same effect today or was it just released at the right time?

There is a festival going on, but it doesn’t last long as an evil magician crashes the festival. This magician makes off with a huge crystal gem and four princesses. The knights chase after the magician to recover the gem and princesses. Even though its story is simplistic, the game shows a wide variety of bosses and levels. You will find yourself running from a large cat to being in the desert with a bunch of aliens. The game is weird and never backs down from it. Bosses can range from a massive dragon with a sock puppet to an evil ear of corn that’s once hit makes popcorn. Some of the gore and humor of the game hasn’t aged well, but it was made with the Newgrounds audience in mind. 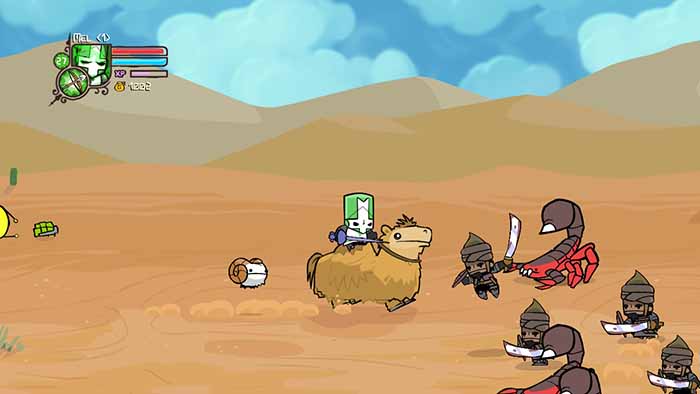 Castle Crashers Remastered adds a level-up system to the beat em up. The game includes a level-up system, different weapons, and animal orbs to use. Which each level up you can choose where the stats points go. Strength, magic, defense, and agility are your choices. Make your character suited to your play style. Leveling up also gives you access to new combos. Single-player gamers might run into certain areas that feel insanely difficult. Using health and power-up items is a way to overcome those painful areas. Playing with friends is the best way to play this game as it allows people to revive each other and they can work together to pull off insane combos. 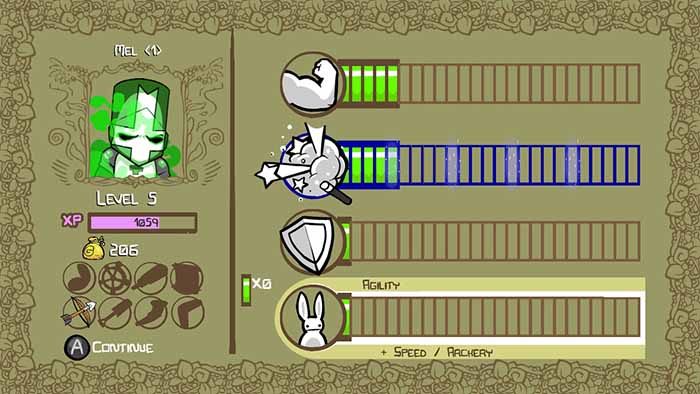 Each weapon has stats that are different from the other. Some weapons might be better for magic whereas some are better for brute force. Dropped by enemies, buying and finding in levels are your main sources of collecting weapons. Aside from weapons, players can use animal orbs. Animal orbs are small floating passive buddies that give you a little bit of extra power. Functions range from allowing you to jump higher, find hidden items easier, or even attack you if your health is too low. Discovering animal orbs in levels and buying them from shops are your main sources of obtaining animal orbs.

Each character in this game is distinctive. For example, the Blue Knight has powerful ice magic whereas the Pink Knight has rainbows in her magic spells. All characters are not made equally, so keep that in mind while making your choice. The remastered version gives you a larger selection of characters to use from the start, so finding someone useful is more likely. Every character has their own stats screen, so you will start at level one every time you play as a new character. You can unlock enemy minions and even the alien from Alien Hominid as playable characters.

It’s no surprise that Castle Crashers Remastered stays true to its 2D flash art style origins. This art style easily fits in today’s world, due to all the flash cartoons that are currently airing. Even though the 2D art style got a few touch-ups in the remastered version, a few of the game’s hitboxes were not improved. There are times where it looks like your attack should hit, but it simply doesn’t. Readjusting a few of these hitboxes would have been a vast improvement. The soundtrack of the game isn’t huge, but the few tracks that are in the game are great. The game runs much smoother than its initial release and contains over the top cartoon-like animations.

There are over 20 characters to unlock, animal orbs and weapons to collect, a small list of achievements and online leaderboards to take part in for the singular player adventurer. ‘Back Off Barbarian’ is a pleasant new mini-game that appeared in the remastered version. Your character must move around this grid to avoid other players or barbarians. It sounds very easy, but it ramps up in difficulty rather fast. Jump around a grid-like map as you follow arrow commands. The arrows can throw you off while you try to remember which button is for which arrow. If a barbarian lands on the same square as you, then it’s game over. 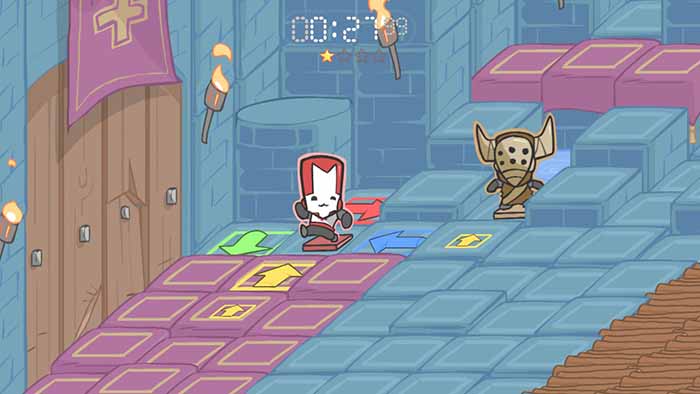 Replaying the game with your friends is the real source of replay value. Castle Crashers Remastered lets you play with friends locally and online. Local and online friends can team up or against other players in the story mode, the arena and in Back Off Barbarian. In the story mode, teamwork is the focus, but there is a bit of a competitive side in this mode. Once you rescue a princess with friends, you must then fight each other to see who will be the sole knight to save her. Arena mode pits you against each other and in Back Off Barbarin, your goal is to be the last one standing.

Castle Crashers Remastered has enough variety for players to experience and plenty of characters, animal orbs and weapons to collect. Playing alone certain areas may feel more troublesome, but the game is still manageable. The ability to play online is still one of the game’s biggest strengths. The immature and juvenile humor may turn off some players. Castle Crashers Remastered isn’t the same mind-blowing game it was when it first came out. However, it still holds its ground as a solid beat em up that can be enjoyed by all, but especially with friends.

Castle Crashers Remastered gets an 8/10